Load test 3 what do you think? UPDATED

Finally got decent enough weather to go and do another load test. In my last test, I had 3 loads that stood out, at 45.0, 45.2 and 46.0 grains of Varget under my 155gn Berger hunting VLDs. For those 3, I had the following notes


Today when I went out, I had 2 purposes, 1 to sight in my new Vortex Viper PST, and, 2: to do some load testing on those 3 loads. on the first goal, I did OK, I think I have the 100 yard zero pretty well figured out. On the second, well, here's where I need some help. 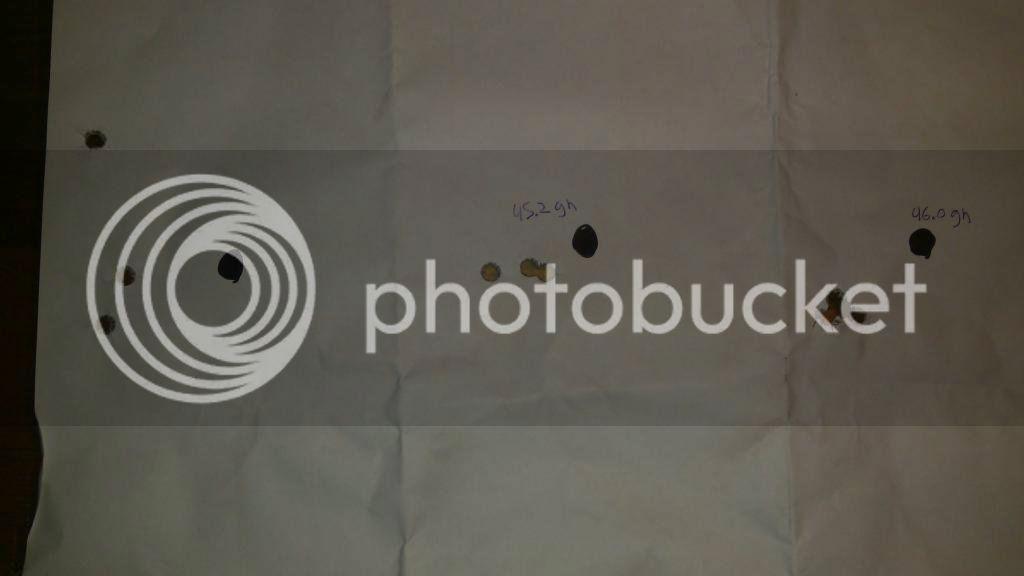 The 45.0 loads were a waste as far as testing, because I used the 2 sighters and 3 rounds to get on paper. The 2 hits just to the left of the dot are the last 2 shots at that charge weight.

I adjusted my zero .75 MOA, splitting the difference between the 2.

I used the bottom left corner of the square for point of aim.

The 46.0 group had one called flier, making for a group of .88 MOA (2 of the rounds were touching). The center of the group was 2.4 inches below point of aim.

I would re shoot the 2nd and 3rd group again, can you shoot those at 300yards?
E

That's what I was thinking too. I can shoot 300 at my range. it goes to 450, I've been stepping it back incrementally as my confidence goes up. after this last outing, I'm starting to feel pretty good. The rifle has been doing awesome. Think my next test will take her out to 300 and see what happens. have to wait for good weather again. My car doesn't make it all the range, so it's walk in, walk out, and walking to place targets, bad weather is no fun

I'd reshoot, and throw in a 45.6 group. I suspect you'll see that the trend continues and 46.0 is the smallest.

I have gotten ejector marks intermittently at 46.0, which is why I kept that as my top load weight.

I am with Dr. Vette,

Good Luck and let us know.

I think you are to a point where 3 shot groups aren't enough to make a quality decision.

I'd suggest going a bit over 46 grains but if you are at maximum you are at maximum. The reason for the suggestion is that I have found when the group is horizontal as with the 45.2 - 100 yd group then symmetrical as the 46 - 100 yard group, the next step up may well shot a vertical tread. Showing the load the rifle likes as the 46 grain load.

The 200 yard targets show a bit of a shift in the formation of the 45.2 grain load from horizontal to vertical. A lot of things could cause that.

I'd consider loading 5 each of the 45.2 and 46 grain loads and shoot them round robin being calm cool and collected the whole time. Then make the decision.

In reality you can't go too far wrong for hunting purposes with either one.

Don't shoot too much. A callus on the trigger finger causes fliers.
E


royinidaho said:
I'd consider loading 5 each of the 45.2 and 46 grain loads and shoot them round robin being calm cool and collected the whole time. Then make the decision.

In reality you can't go too far wrong for hunting purposes with either one.

Don't shoot too much. A callus on the trigger finger causes fliers.
Click to expand...

Last night I loaded up five each of the 45.2 and the 46.0, it's supposed to be decent weather today, mid 30s, but maybe cloudy. If I get a chance, I'll test tohose 2 loads again, and hopefully be done for the winter with testing.

any thoughts on range for the test. the 200 yards seemed to be a good distance, but I can push it out further

As noted above, do them in round robin, even if you stick with your 2 loads. 5 min between shots, allowing the barrel to cool between each.

Let us know what you get.
E

As noted above, do them in round robin, even if you stick with your 2 loads. 5 min between shots, allowing the barrel to cool between each.

Let us know what you get.
Click to expand...

I did a round robin before, with 6 loads, I didn't have 45.6, but I did have 45.5, and it was quite a bit larger of a group, that's why i was sticking with these two loads, they had produced the best results.

Ideally I think it'd be nice to see this as your load progresses:

Conditions:
Temp:34 degrees
Humidity: 96%
Sky cover: cloudy/foggy
Wind: from 3 0'clock at about 7mph ( a guess, didn't feel the wind when placing the target, but it was definitely there when I retrieved the 300 yard target)

This was mostly on me, I wasn't waiting that much between shots (Dr. Vette, I got an update on your post between shooting 200 and 300 yards) There are 2 called fliers, one on each target, because, well, I was an idiot and shot the wrong target once with each load....hooray for being anxious to shoot and making stupid mistakes!

anyway, at 300, there were more definite results:

The 45.2 has 4 shots I can see, not actually sure where the 5th shot is annoyed at that one. POA was the bottom right corner of the square.

the 46.0 target has a nice horizontal string, except that one shot that his higher up, when these two old timers came in and slammed the door on the range right as I was squeezing the trigger. POA was the bottom left corner of the square. I definitely need more practice judging and adjusting for wind
E

Okay. not sure if this is helpful, but I took a pic of all the targets I have from yesterday and today.

The order in the pic goes, from top to bottom

Suggestions, as there seems to be a reoccurring something going on:

2: If you know of a good shooter, most probably will be your wife, let them give it a go. Don't let any stone unturned.

R U chronoing each shot. Maybe something like neck tension is raising it's ugly head. . .

B
Berger seating depth test results - what do you think?
2 3

Load development? What would you do?