Eric came across the Idleback Shooting platform when he visited the Shot Show in January, since then Eric has been able to Test and Review the Idleback Shooting Platform out in the field. Eric wishes to share with us his first test results and thoughts on these fantastic shooting chairs. Read the Article...​
This is a thread for discussion of the article, Idleback Shooting Chair Review, By Eric A. Mayer. Here you can ask questions or make comments about the article.
R

This past summer I had the opportunity to test the Idleback shooting chair for a day out in the high desert of Oregon. I found the chair to be made very well. High caliber materials and workmanship. Put together was straight forward. But i 'm sorry I have to stop the praise there. I found it a pain to adjust. Shooting with a .5 moa Striker specialty pistol in .270win and a .5moa .17 caliber rifle, we could not come up with groups smaller then 5 or 6 inches at 100 yards. We had wind blowing around 5 to 10 mph and you could not hold on target at all. We wanted to use it for Sagerat shooting later in the day, but there was no way we could have hit any of the little ground squarrels the way the chairs gun rest and arm rest wobbled in the wind. We tried several different adjustments trying to get it stable in the breeze but it would not work. We set it up "as instructed" so it wasn't a matter of us not knowing how to adjust it. Maybe without wind it would be better, but how many times are you in the high desert when the wind is not blowing?
It was very disappointing, we were both looking forward and excited to test it. But after working with it for quite sometime we gave up and used my old homemade shooting bench and started shooting sub moa again.
Unless this chair was changed a lot sense then, I would not own one myself. Which is very disappointing. Because it is such a well made chair. Quality as I said is first class! It just did not work for what we need it to do, shoot long range in the high desert. Maybe indoors with no wind or a protected environment it works, but not out here. If we couldn't hit a target at 100 yards how could we hit a sagerat with a body only 2"'s wide at a couple hundred yards.
I am only writing my opinion of the Idleback shooting chair and I suggest to anyone thinking of buying one to find one and test it where you will be most likely to hunt or shoot.
That is a lot of cash to spend not to be sure it will work for you.
It was such a shame it didn't work for us because it really is a cool chair.
Like I said this was my experience and my opinion.
Just so you know I have been shooting my whole life. I am not someone that just picked up a weapon a couple of years ago and thinks he knows everything there is about shooting.
I was also in law enforcement for 17yrs, I know what I like and what works for me.
Rupe
E

I'm not doubting the issues you experienced, but getting the chair to be solid enough for longer shots was not an issue for any of us using the chair in NE California for Belding ground squirrels, or more recently, in Arizona shooting prairie dogs. In fact, the longest shot of the PD trip (372 yards) was shot from the Idleback Chair, on video, using an AR15 chambered in 5.56mm. The person who made that shot is currently working on a quick report, with his own opinions, on the Idleback. That will be published soon on AR15Hunter.com. 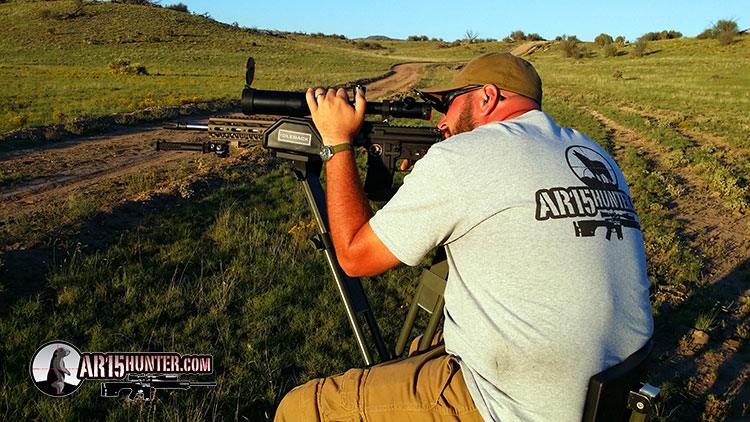 If it is very windy, I could see how you might have issues, so moving to a less mobile, but more solid bench makes sense. But 5 to 10mph should not have been a problem. I was shooting in that and more while up in NE CA.

If you have any pictures of your set-up out in the field, I'd be interested to see them. One thing I did realize early on (and it is noted in my article), was that if you do not plant the feet firmly into the ground, you will run into a bit more movement.

Btw, there is a video embedded within the original article on my site: Idleback Shooting Chair Review with Hunt Clips that shows many of the shots on the Belding ground squirrels.

I look forward to seeing the pictures.

Eric I will look for a photo but it only shows me with a Savage Striker so comparing your AR would be the apple to oranges thing. Looking at your photo it looks no different then the way we had it set up.
We even moved it to a different spot to make sure it wasn't the sand we started in. We even tried it on a flat plywood sheet. The wind was gusting some, but nothing we tried would steady the rest. We moved the arms in and out up and down. It just didn't work for us. All of this was passed on to the rep. As I said it is manufactured very well, but if we couldn't couldn't get it steady enough to group under moa at 100 yards with the firearms we were using then it maybe this particular chair had a problem. This wasn't just a 5min. test, it was review, we really wanted it to work for us. No one wants to write a bad review, but if one had been written it would have been. It was decided by the person who was given the chair not to write a review. He talked to those that were involved with the review that it was best not to write one and to send the chair onto someone else that might have better luck with it. The chair was not sent on so it looks as though you have a different chair.
That makes me feel as though maybe there was something wrong with the chair we used.
But as far as I am concerned, we put forth a good test and review.
It is my opinion I would not recommend it to others with a clear conscience. I'm glad you had good luck with it. I think that more reviews should be done on it, I mean isn't that what reviews are for?
Now we need another neutral person to review it and see what they come up with. Maybe have one sent to Wyoming to use on the windy plains and see how it works there?
What can I say we had different experiences using the chair in our areas.
I can't post a rifle photo because I don't have permission to show the rifle shooters photo, if I even still have it. My photos, if I still have them are on my phone. I can't seem to post pictures from my phone. I live off grid with no electricity so I have no PC to do it on. But like I said it would be me with a handgun and that would not be a good comparison.
I really do hope it was a faulty chair, because it is such a well manufactured product.
Sorry I can't agree with you.
Rupe
R

I did find a photo of me shooting with my handgun, but can't get it to post up.
If you pm me your email I can send it to you. But no jokes about old fat guys!
E

No problem. You can send the picture to eric(at)varminter.com .

My first trip with the chair was to Texas. It was VERY windy (30+MPH) and I was having a rough time shooting while on it. After that hunt, I spoke with one of the Idleback guys to verify some information about the chair's set-up. Steve gave me some good info and I realized that the front was not out far enough to give good balance and I didn't push the feet into the ground deep enough.

A few weeks later, we tested it very thoroughly in NE California with the wind, with myself shooting on it for one day, then my cameraman shooting on it for the next. I finished up the hunt by using it on day three. We had no issues and I was shooting various rifles, including a 23" Contender Carbine (rifle), a CZ Varmint in .17 Hornet, a CZ American in 17HM2 and a lever-action .22 magnum. No issues at all.

In-between that hunt and the prairie dog hunt in Northern Arizona, I used it here in the SoCal high deserts, which are always windy (you will see how windy it is in the video, while it drowns me out while speaking).

Lastly, during the prairie dog hunt, Will (the guy in the picture, who is from Ohio) used it for at least two of the 4 days we were there. He had never used it before, so it took him a couple of hours to get comfortable shooting on the chair, but once he did, he loved it.

I don't doubt that you guys spent quality time trying to make it work. I wish you would have had more time with it, or were able to speak to someone before sending it back, as I think there must have been something up with that individual chair, or the set-up. I'll have more thoughts after I see your picture, but I'll email you back on that.

Btw, I am a stickler about documenting everything I review with video and pictures, so when I do a review I have plenty of back-up of my results. Thanks for taking the time to explain a bit more. Perhaps when I get out of California in about a year and am in Boise, I can bring my chair over to OR and we can try it again! gun)

That would be great to have you swing by for some shooting. And I would try the chair again, no problem there. And if it proves to be a faulty chair we tested then I will retract my statements. But til then my comments and thoughts are the same.
Yes pm me with your email and I'll email and the photo of me and my specialty pistol.
Later. Rupe
G

Does anyone else have experience with this chair? I would be great to hear from others. thanks
J

I also hunt those little rodents in NE California in the Klamath area and around Alturas. I have had to screw wood runners between the legs of our chairs to keep them from settling into the soil. How did this chair handle the settling problem? In the photos the feet don't look very wide.