Can you see me?

A couple weeks ago I had a nice visit again with Justin Stevenson near Newcastle Wyoming. I have coyote hunted with Justin and his posse before and always try to get out there a couple times each year. The posse members had to work the day Justin and I went out but I'll connect with all 3 in December.

How do you like my new Sitka Gear duds? We sell it in the LRH Store now and thought I should learn about it so I can talk intelligently about it. Didn't realize I'd like it as much as I do. Or more accurately, didn't realize I'd actually care much whether I wore it or not. But, wow, it's really comfortable and practical. But enough commercial.

Here's Justin with his new AR. Really cool. I hadn't seen one just like it. And nice camo ghilly suit.

We did 3 sets that am, interrupted by a fuel line issue. Here's Justin under his lifted Jeep working on it. I was impressed. I have never felt comfortable with my auto mechanical skills. He'd be a good guy to have around when you're a gazillion miles off-road and you have a breakdown.

We called one coyote and both missed running shots at it. Then we stopped at a prairie dog town and I killed my first ever dogs. Took a few shots to figure out the 10 mph plus switching wind and then I busted two in a row at 500 yards.

Justin, if you find the quick detachable sling I left on the ground there, it's all yours, buddy.

Unexpectedly I had to cut the day short when I got a call from Robb Wiley of Non-Typical OUtfitters. He was out of the mountains for a day only and needed me to buzz over to Alpine, WY to work out the details on our two LRH Group hunts in 2013 and 2015. Nine hour trip to get there by 9 am the next day.

By the way, I bought my current vehicle in June of 2010 and here is the picture I took of my odometer when I got home from this trip 27 months later.

Where's the pictures of the coyotes Len!?!?!?

I spend most of the winter coyote hunting here in South Dakota. Dead dogs always bring a smile.

Greg, it's always been my experience that you have to kill em before they'll pose for a picture.

Where about in SD?

That's been my experience as well. Had to give you a hard time though.

I'm in Huron, SD. Center of the eastern half of the state. We get some dogs killed around here. We don't care how you stack them... as long as its deep! 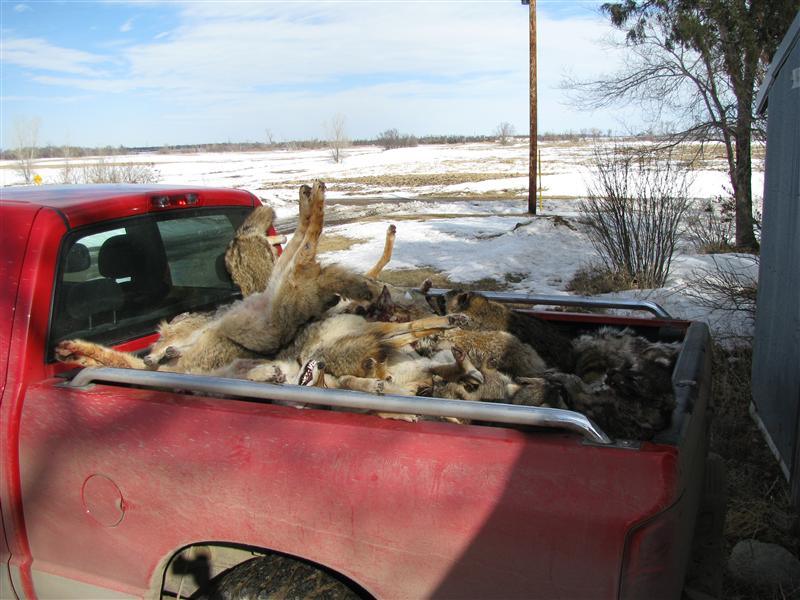 Orkan, very impressive. How do you hunt them where you are?
S

from the looks of it he put food in the bed of his truck and they just jump in as be drives around.

submoa said:
from the looks of it he put food in the bed of his truck and they just jump in as be drives around.
Click to expand...

It's so much easier to fly.

I don't have time to fly.
J

Well the jeep has since been fixed for good! Really helps having the right kind of hose. The day you left I went back out and called 2 sets and got the only one to come in on the second, I have not gone looking for that sling yet. As for the fella from South Dakota, do you hunt that contest for the varmit hunters assoc?

Len Backus said:
Orkan, very impressive. How do you hunt them where you are?
Click to expand...

Calling, or if I happen to see one while heading to work, he'll get laid down.

World Predator & Hunting Expo - Will I see you there next week?

Got the bobcat back today, let me know what you think