My initial observations on some testing I’ve done lately.

NOTE: DO NOT TRY TO DUPLICATE THESE TESTING CHARGES IN ANY PRODUCTION RIFLE. ALL TESTING INDICATED WAS PERFORMED WITH AN ULTIMATE FIREARSM INC., BP XPRESS, WHICH IS APPROVED FOR THE HEAVY CHARGES THAT MAY BE INDICATED. READ AND FOLLOW YOUR RIFLE’S OWNERS MANUAL.

First up, the ASG Gen2 breech plug, designed for the UF and RUM rifles. This new breech plug is definitely a game changer for either of the rifles. It is machined for a perfect fit and uses module ignition and there is no gas leaking of any kind. It’s also easily removable. As the first owner of a UF to have his BP modified to the ASG plug, I’ve found that torqueing the plug to 70 inch pounds has worked perfectly and when uninstalling it, it removes at 70 inch pounds. I started out using Permatex Nickel anti seize https://www.permatex.com/products/lubricants/specialty-lubricants-anti-seize/permatex-nickel-anti-seize-lubricant/ Although it is somewhat messy, it’s made for stainless and has worked. Yes, it takes a little more cleaning, but it seals and the BP doesn’t stick. The brushes and extension I found at Harbor Freight work perfectly through the action to clean the BP threads.

Next, the switch to BH209. Here’s where some might disagree, but that’s ok too. After shooting T7 pellets for almost 5 years from my UF and now switching back to BH, it takes 3 or 4 more times the patches and time to clean BH from the barrel and brake. It’s also a much dirtier propellant than when using the T7 pellets in the UF. Although one can shoot many rounds with or without swabbing, it creates a filthy muzzle brake and coats it with a black sticky or lubricant type substance. Now before some go off on this stating that it could be the lubricant I use after cleaning, I’d like to state that ALL lubricants are completely removed from the barrel prior to the first round. First I swab out any lubricants with clean dry patches. Next I use 91% alcohol straight, on a clean patch to further remove any lubricants in the barrel. I follow the alcohol patch with dry patches. I highly doubt there’s any lubricant remaining in the barrel. The good thing is, one can adjust his/her charge even to the tenth grain with BH and it doesn’t always require swabbing between shots, and in general, provides easier loading of a sized or saboted bullet. I do swab between shots with 50/50 Hoppe’s and 91% alcohol using one damp patch followed by two dry (T7 was just one patch). Others may not or ever understand this part, shooting heavy charges of BH is like shooting a BB gun when compared to the heavy charges of T7. Burn rates/pressure must certainly dictate the difference in recoil. I guess with any propellant, there are some tradeoffs.

Sizing ……… Now bear in mind I’m shooting through the 50cal Lothar Walther barrel on this Ultimate BP Xpress and new to the sizing process. First, thanks to Jeff, Luke, Levi and Dennis for all the suggestions. Without question for my application, even the adjustment of a single mark on the sizing die can make a huge difference in the POI and group size, especially beyond 100yds. I took a lot of time learning to size and adjust charges to match. I’d shoot 5 rounds of a specific sized bullet with a specific charge. Then increase, or adjust the charge, looking for optimal accuracy/group size. Then it would be another 5 rounds with the next single mark sized bullet and starting charge and repeat. All the time giving the rifle barrel ample time to cool between rounds. Yes it takes time, but that’s part of the fun and learning process.

I’ve long wanted, along with a few others, to be able to eliminate the weakest link with modern inline 50cal rifles, the sabot. The Fury star tips could end up being just the ticket for hunters using 50cal rifles. It’s a .500” bullet knurled up to .503” with sizing specific to one’s individual bore size necessary. I’ve used these bullets in testing, pretty close to 100 + rounds. Even when starting with light charges (107grs volume BH), I pulled perfectly mushroomed bullets from the berm.

Because it’s been leased to law enforcement all month, I was able to have only one hurried day on the club’s range. Shooting at 200yds the Fury bullets will easily maintain MOA.

I also shot 300yds and they would group to MOA or slightly larger. More 300yd testing in the near future is in order. For ranges beyond 300yds, the bullet may be limited with the low BC.

For the hunter that wants a 200yd hunting bullet and is not recoil shy, these 325gr Furys will put the hurt on a whitetail, or any other North American game animal. IMO this bullet should work well with production rifles using higher end charges. Yes, it will require the initial investment of a sizing die, which might be prohibitive to some. On the other hand, there’s no more buying separate sabots to fit different bullets and depending on how many rounds are shot, one might break even. Additional bore size bullets for some western hunters would be a plus.

I don’t believe the Fury star tip will be the last 50cal bullet to bore we see in the future.

Nice write up. I don't know enough about how the muzzle loaders work, but they fascinate me. We cut muzzle loader bullets for another company that are bore size. The guys that use them are shooting smokeless powder and pre rifle the bullets in a short piece of barrel. I know they Are getting crazy vel and shooting to 1000y. Pretty cool.

RockyMtnMT said:
Nice write up. I don't know enough about how the muzzle loaders work, but they fascinate me. We cut muzzle loader bullets for another company that are bore size. The guys that use them are shooting smokeless powder and pre rifle the bullets in a short piece of barrel. I know they Are getting crazy vel and shooting to 1000y. Pretty cool.

Thanks.
Yup, the 45 smokeless rifles are some awesome shooters. Some guys live in the few states that allow smokeless during their dedicated muzzleloader seasons, more not though than do.
But its like Luke says, the best smokeless muzzleloaders make the best BH muzzleloaders...….. or something like that
I'm smooth sizing, where many of the smokeless guys full form.

I don't understand the whole sizing thing completely. What is the diff between full size and smooth?

RockyMtnMT said:
I don't understand the whole sizing thing completely. What is the diff between full size and smooth?

So smooth sizing doesn't result in s sealed bore? How do you fill the grooves? Wondering if we couldn't make a bullet that would work easy for what you are doing with smooth sizing.

RockyMtnMT said:
So smooth sizing doesn't result in s sealed bore? How do you fill the grooves? Wondering if we couldn't make a bullet that would work easy for what you are doing with smooth sizing.

In general, a wad is normally placed between the propellant and bullet. For instance, I'm using a .518" diameter, .060" thick veggie wad. However, even a smooth sized bullet can obturate enough that in some cases wads are not used.

Find the 3rd hole? No, its not under the cutout information..... 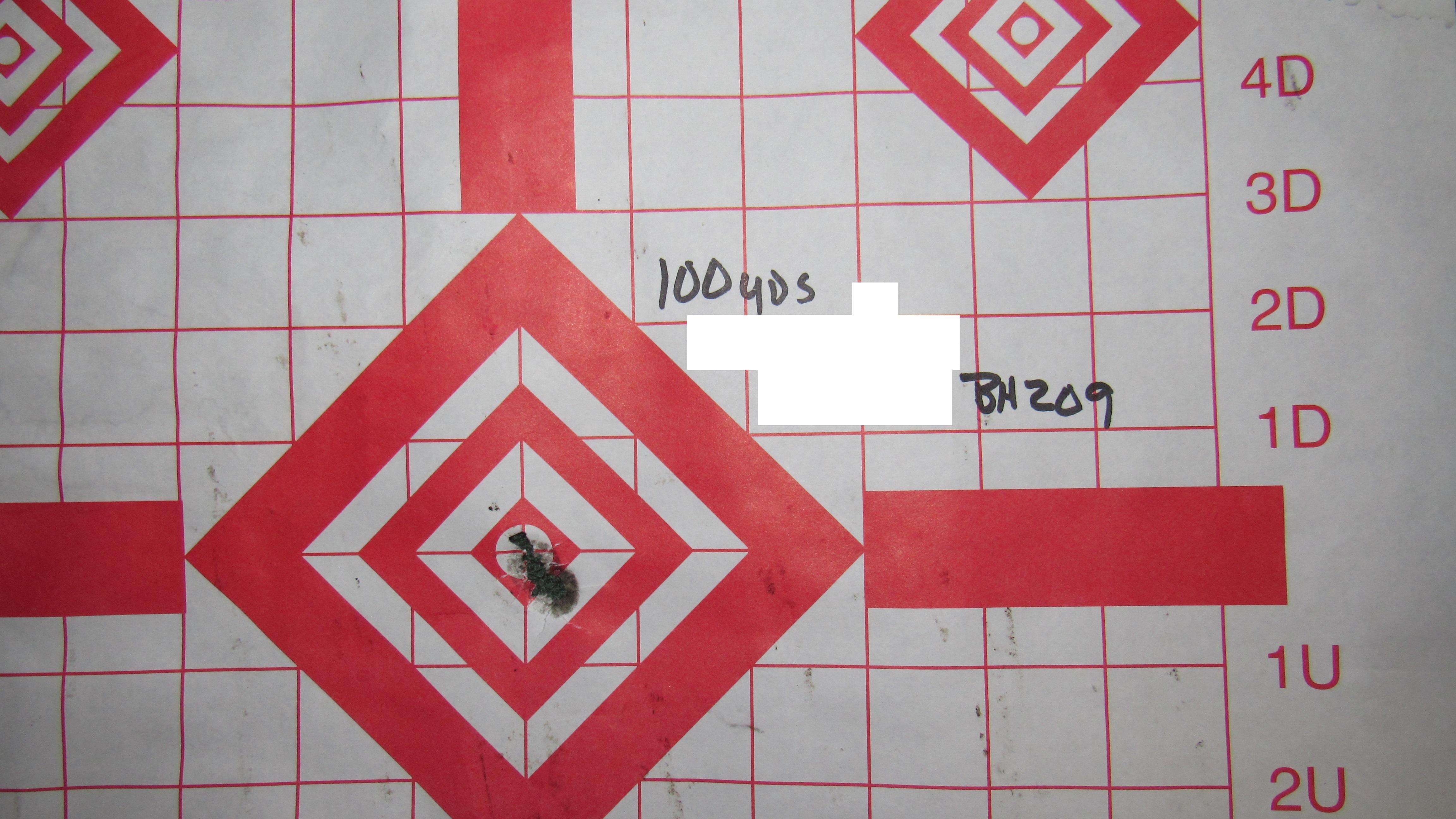