While I have now been hindered by various muscle damage issues after years of shooting heavy draw weight bows, it’s now a challenge for me to go much past 45#, limited to a dozen shots or so. Having used an instinctive shooting style(John Schulz) for about 50 years, I’m still amazed at the accuracy that an engrained form combined with the instincts of hand/eye coordination is capable of delivering with a stickbow and cedar arrow.

35 yards with this gorgeous 52# David Miller, 5 lam all bamboo(no glass) with Myrtlewood handle, built off a blue-print of Howard Hills “Grandma”, one of his favorites through the early 50’s. Custiom built for me over 20 years ago. Shown with my home made Port Orford Cedars. Did tear some feathers. Shot the first arrow then tried to hit it with the remaining 5. 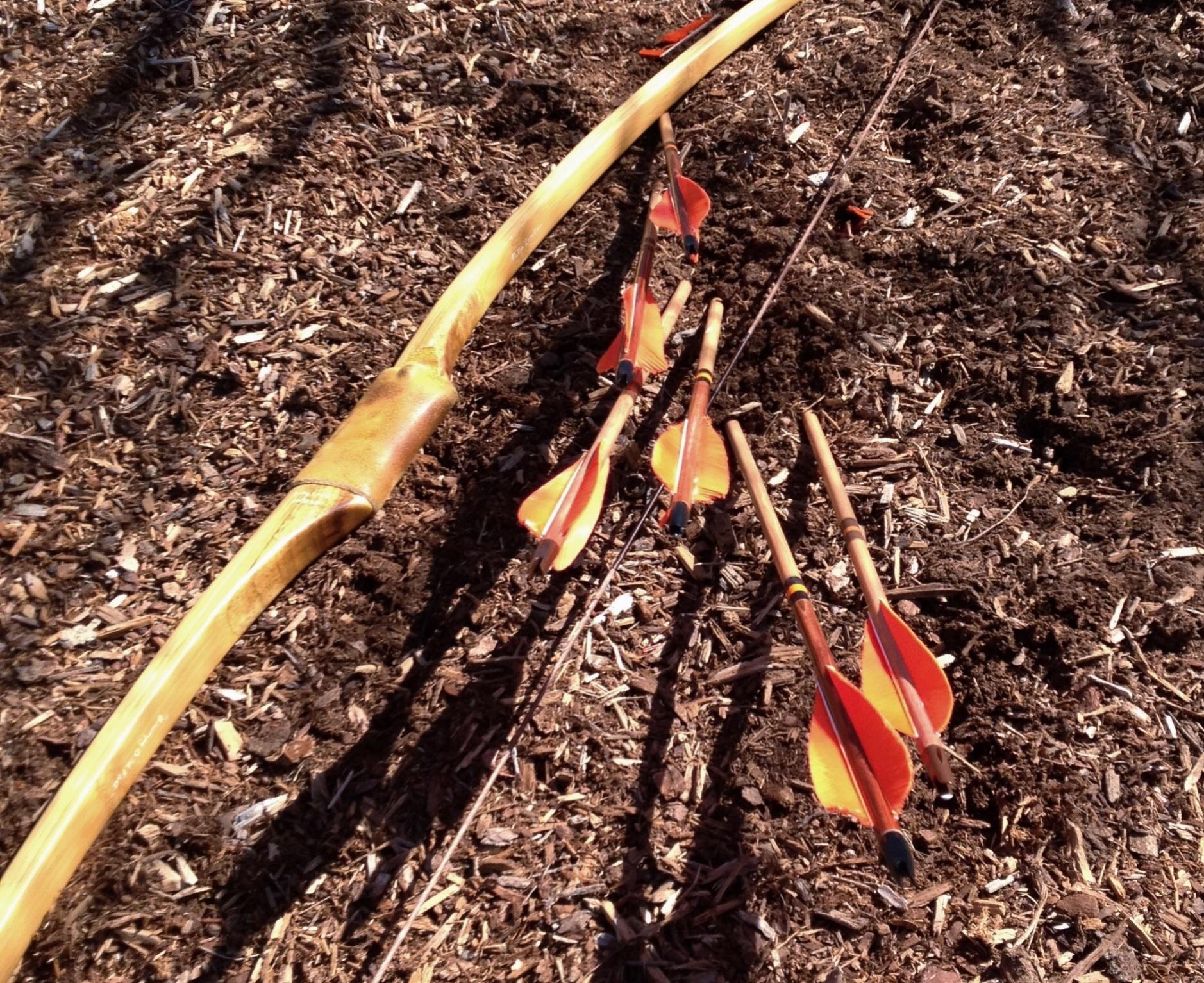 I have a Schafer take down. I have only gotten a single animal with it, a small whitetail buck I rattled in and shot at 7 yards. Full disclosure, I now hunt with a compound bow and have been much more successful with it than I was with my recurve. I still sometimes wish I had my recurve with me on a hunt or two though, every now and then an opportunity will present itself where I feel like I could be effective with it.
A

I started out with an old Bear Grizzly recurve 45# that I got handed down from my dad about 35 years ago. It lasted about 10 more years of me shooting it everyday, until cracking a limb. Dad never did tell me how long he had before i got it .... I've had a few others recurves since but currently have a Martin Hunter 55# I use. I keep it to 20-25 yds for deer. I've shot my fair share of small game over the years with recurve.... it' just too much fun and relaxing for me being out in the woods enjoying the surroundings ....and not being at work
D

Yes'er, TD archery is on the come back for me.

I like the idea of the budget costs, and being able to take the Take-down unit with me on my travels.

I ended up picking a bow & limbs that I thought would work with me, everything was working out good for about 9 months as I slowly kept adding on shooting days. About 2 weeks ago I noticed my forum was starting to fall apart with the 35 lb limbs, so the new bow is coming with a set of 30 lb'er limbs ,,, l will decide from there on the other limbs I'll add to this riser after I practic with it for a few weeks.

I found a Pod Cast on The Push "episode #3 with Rod Jenkins,,, He's the fellow from the series "Masters of the Bare Bow..

He came into archery from Alabama as a poor farm kid, it wasn't till much later in life when he joined the Archery club that Howard Hill started,,, it was at that point that Al Henderson took him under his wing.

The Push is one awesome Pod Cast on traditional archery, and a person can scroll back to the very begining to get up to speed.
I'm glad to take on the low pound-age bow limbs as it adds more shooting time and good form Building.

I call it my archey exercise machine. LOL.

Learning from ground Zero will improve the thrill of this adventure.

Ground Hog / Gopher season is getting underway, I hope to get the 30 lb'er sighted in for this. 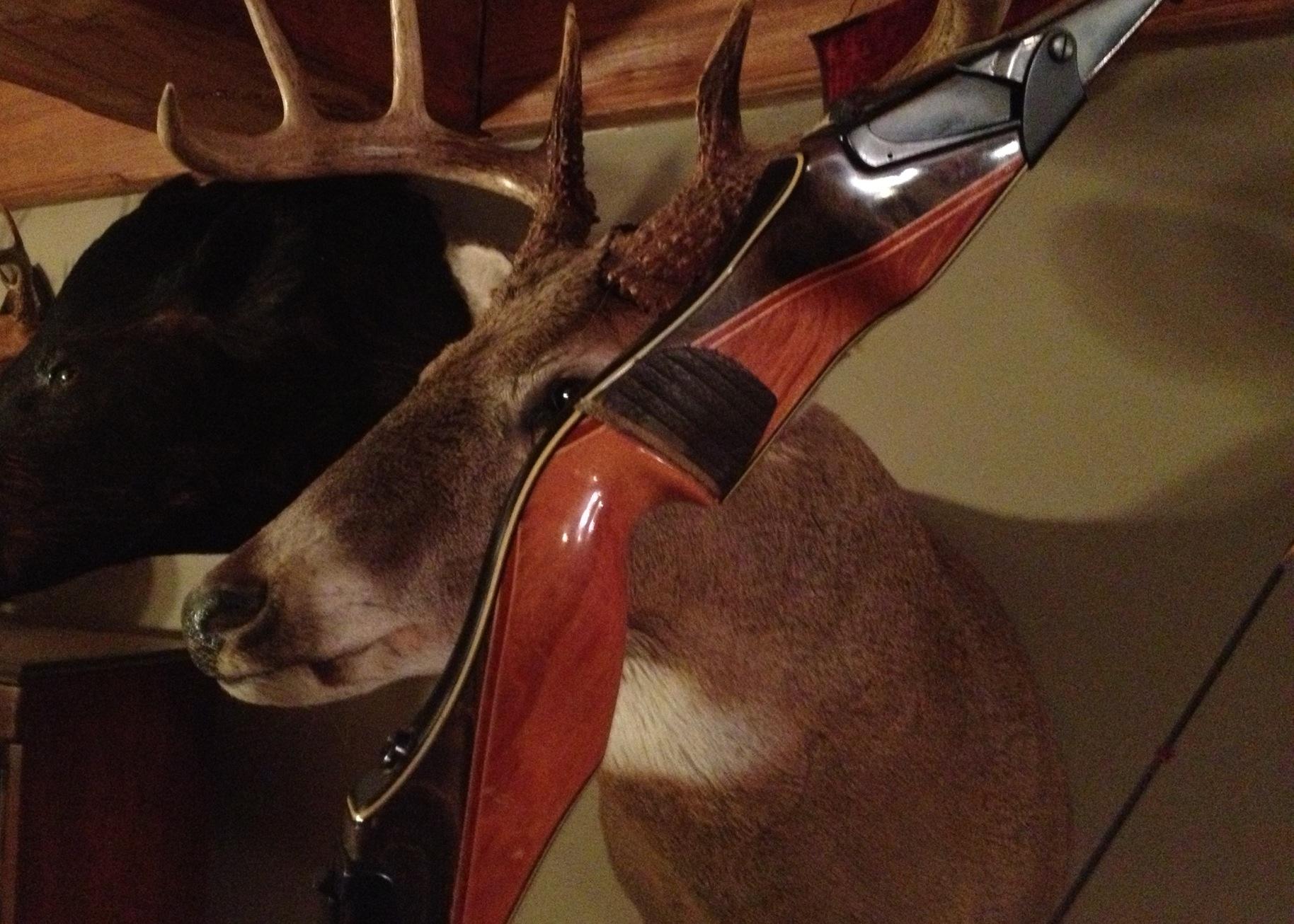 Its the best traditional archery Pod Cast I've ever taken part in, when they tell us to get a note-book, they mean it.

The info is handy for both groups of archers,,, long, recurve, compound, and the likes .

My new 25" Galaxy Torch riser and limbs should be in my hands with days from Lancaster Archery .Ye Ha.

This will be my first ever quality "Recurve Bow" I've ever had,,, the selling future for me on this is the ILF (International Limb Fit) system.

This will speed things up limb when changing limb combinations on my shoots.

I'll start off with the 30 lb limbs, then add other limbs of different weigths depending on how my shooting form is working out.

I'm getting schooled on this type of Archery since its like starting all over.

Bad shooting forum has always pledged my shooting skills, at least this traditional archery will get me back on track.

Have been very fortunate to have a cpl multi time national champions as 3D shooting buds.I'm good to 40 yds,true instinctive.... they gap shoot and are good to 70 or so yds.
P

I don't really hunt anymore but when I hunted; it was bare bow and I shot instinctive. I have used recurves mostly but my last bow was a custom made long-bow.

I bought my oldest grandson his first recurve bow and taught him how to use it. What a joy that was!
S

I've been shooting a longbow since the early 90's. I now shoot a 58# Howard Hill Wesley Special with cedar shafts and 160gr Tiger Shark broadheads. Most of the shots I take on big game are less than 35 yards. Just for fun I target shoot out to 100 yards.
P

I shoot a custom James Berry. My maximum ethical shot I would take is 35yards.

Been doing traditional archery since 1990, but wish I would have started sooner. It brings a thrill and satisfaction to watch your arrow fly and hit it’s target with something so simple as a stick and string. I mostly shoot longbows but one is not enough. It’s nice to switch them up and shoot arrows out of all of them. Almost every year I’ll shoot one or two deer, along with some rabbits,squirrels and occasional coyote. 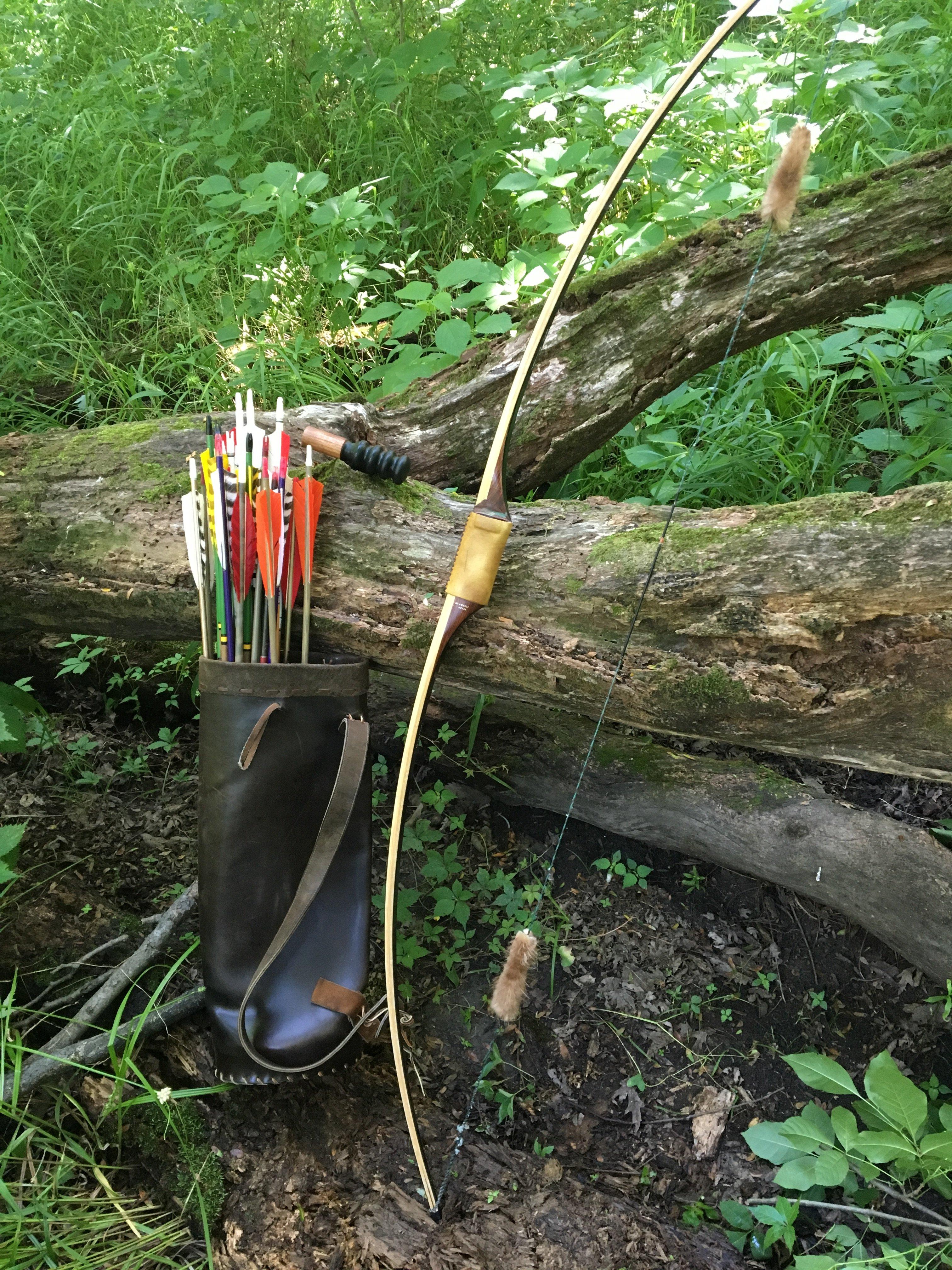 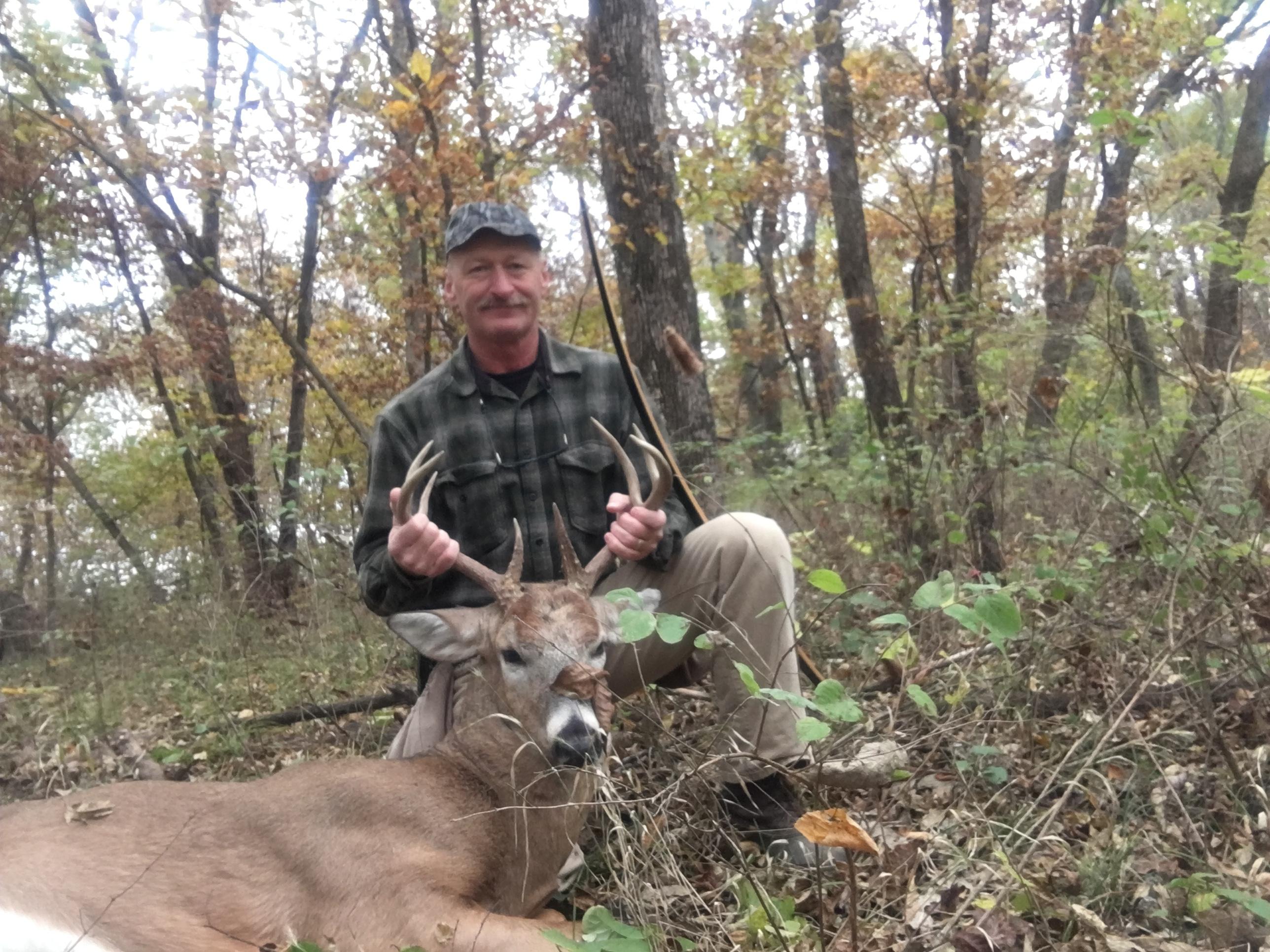 I’ve been shooting a traditional bow for the better part of my life. I’ve had some beautiful custom recurves . My favorite was a asbell era big horn takedown . I traded it for a lone tree long bow that I took a great early season buck first year I hunted with it. That was 20 years ago. I’ve added another lone tree long bow to my collection. Think I’ve taken somewhere around 15-20 big game animals and countless numbers of small game with traditional archery gear.
You must log in or register to reply here.
Share:
Reddit Pinterest Tumblr WhatsApp Email Link