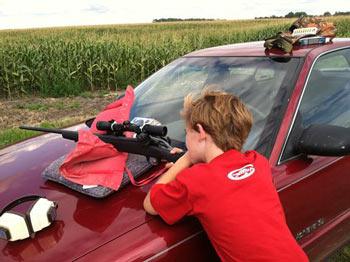 There was never a question of not taking my oldest son hunting with his first youth deer tag, but the thought of it scared me. We rarely spent time together in the woods. When it was time to hunt deer I just went out and “made meat”, as quickly as I could. For me there was no art to it, just use what you’ve learned in your lifetime, shoot, cut and freeze - go back to work.

Terrel’s younger brother Lyle learning target alignment with an empty rifle. This is the same rifle Terrel used to harvest his first doe. When Lyle was confident he put on his earmuffs and put one in the ten ring at eighty yards.


Some years we had up to eight tags to fill, accepted gifts of more game from others, and processed it all ourselves - as fast as we could. Speed in hunting, as in other things, changes techniques. I’ve always sought information to streamline the getting myself into the woods, getting the animal, and putting up the product. There’s nothing really religious about my hunting thoughts or methods.

As in other activities, I’ve sometimes floundered trying to explain what and how I did what I do, because much of it has become a “by rote” method of operation. Imagine being in the middle of a complex task, and being asked how you transferred your tenth last thought into a precision activity. You have to stop where you are, recall the thought that led to the activity, all thoughts that brought you to that point, then clearly explain something you’ve never articulated before.

It is my fault for not spending more time discussing the important things in life with my son, like deer hunting tips and techniques, but I’m not home much - my job takes me around the continent for weeks at a time. Then I have a few days at home, and it’s back to work, and “gone again”. In those few days at home, many things need to be done, along with all the fun stuff. So, excuses aside, I needed to take a twelve-year-old deer hunting with his first youth tag.

The morning of the designated day I woke up six hundred and fifty five miles from my house. This could have been a viable excuse to shelve the outing, my long-suffering son always says he understands, but I’d promised it was his day to hunt. So, I used my drive time to strategize how to get a twelve year old boy as close to a deer as possible, get him into a shooting position without flustering him, and stay out of the way of his attempt to harvest meat for our table.

The preparation for the moment of departure had been done during the summer. Terrel had been shooting the rifle he was going to use two to three times a month, for months. Although I took him out to shoot numerous times, I only allowed a few rounds each time. As an accomplished violin player Terrel is steeped in the logic of purposeful practice, so practice time with a rifle became a careful, precision seeking event.

The shots he took had to count. He had to learn rifle, scope, target alignment, and trigger control, so I didn’t want him to shoot so much that he began to be affected by muzzle blast and recoil, and start forming any habits related to any perceived unpleasantness. This seemed to keep him enthused, and respectful of each exercise.

Blasting into the house less than two hours before sundown, with a half hour drive to our hunting ground, there was no time for additional lessons. This was payday. I put a blaze orange t-shirt and hat on Terrel, and my usual, unwashed, mangy pullover on myself, and headed for the woods.

My possibles bag is always packed. The only thing I might have to change is the caliber of ammo I’m carrying. The knives, ropes, sharpeners, licenses and binos live in the bag.
Next page: Youth Deer Tag >