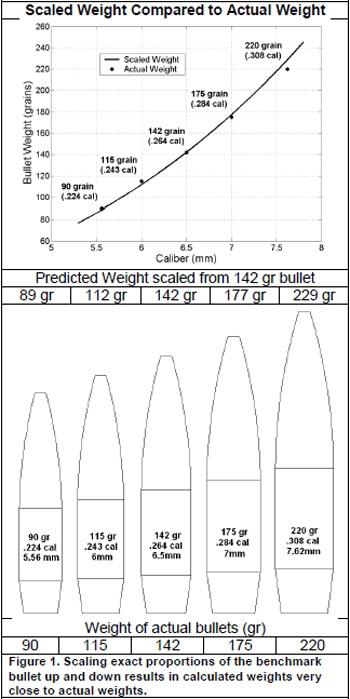 
Part 1: The Nature of Scale

Abstract
When you look at the bullets we use for long range shooting, you can’t help but notice the striking similarity between all of them. From .224 thru .30 caliber, they have just about the same proportions. In this article, I’ll try to explain the major consequences that scale has on long range bullets. This is the first installment of a two part article. This part establishes some facts about bullet scaling, and the second article examines how you can use the information to make better-informed decisions about your equipment.

Let’s be Clear…
This is not meant to be an opinionated rant about why one caliber or bullet is better than another. This is also not about what cartridges are best suited to propel bullets of various sizes. And we’re not talking about who makes the best bullets for certain calibers, or specific case studies of ‘what works for me’.

What I am talking about is the fundamental nature of how BC and stability relates to caliber. The effects of these trends can be subtle, and are often overshadowed by other factors of shooting. But make no mistake; the things I’m discussing are present and true for all people, places, brands, and on every day of the week. Nature is persistent like that.

How Scaling Affects Area and Volume
I’ll apologize up front for the ‘physics 101’ I’m about to put you through but I promise, paying attention to the fundamentals early on will pay huge dividends in the understanding of things to come.

When you scale an object in size, its size changes in all 3 dimensions. The scaling affects the length, the area, and the volume. The interesting thing is that all 3 properties change in different proportions for a given scale factor. The best way to explain this is with an example.

Imagine a square drawn on a piece of paper that’s 1" on each side. The square has an area of 1 square inch. Now double the length of each side (you’re scaling it by two). The square is now 2”x2”, but has an area of 22 = 4 square inches. Furthermore, if you have a cube that’s 1”x1”x1” and you double its scale, the cube is now 23 = 8 cubic inches in size. That’s a 4 times increase in area, and an 8 times increase in volume from only a 2 times increase of linear scale. Bottom line: volume increases more than area as you scale an object up. For example, if we scale a bullet by 1.05, its area will increase to 1.052 = 1.103 times its original area. Furthermore, the volume will increase to 1.053 = 1.16 times its original volume. In ‘geek speak’, you would say: “area goes up with the square of the linear scale, and volume goes up with the cube of the linear scale”.

I’m sure none of this is surprising to those who regularly work with construction materials. You know that it takes more than twice the amount of carpet to cover a 20’x20’ floor than a 10’x10’ floor. Back to bullets…

The bullets I’ve chosen to consider for this study are not exact scaled proportions of each other, but they’re close. For example, you might note that although the caliber scales up, things like jacket thickness and meplat (bullet tip) diameter stay about the same. It’s true, but these are details. As with most of the calculations in this article, my intent is not to show hair splitting accuracy, but rather to illuminate some basic and important trends. It’s easy to get confused if you try to account for every small detail. In many cases, understanding the fundamentals can enable you to make an educated guess, which is better than being stumped.

How Scaling Affects Weight
Now we’re going to build on the material in the previous section. Basically, you can re-read the entire explanation on scaling and replace the word ‘volume’ with the word ‘weight’. Bullet weight increases in proportion to the third power of the linear scale (there’s that ‘geek speak’ again).

With any scaling exercise, you must start with an original shape to scale. I chose the Sierra 142 gr Matchking as the ‘benchmark’ for our scaling study. What happens if we take the 142 gr benchmark bullet and scale its proportions up and down to other calibers? To find out, let’s apply what we’ve discussed about scaling to predict the weight of a 7mm bullet that’s proportioned the same as the benchmark 142 gr bullet.


So according to the rules of scaling, a 7mm bullet having the same proportions as the 142 gr benchmark should have a weight of 177 gr. Figure 1 shows the effect of scaling for an entire range of calibers.

At the beginning of this article, I promised to stick to the facts. However, I can’t resist a little speculation at this point. Notice how well the bullets scale to the benchmark in terms of weight. That’s not an accident. Here’s my theory: I suspect that after the 6.5mm, 142 gr Matchking bullet became popular with so many shooters in various disciplines, Sierra decided to design bullets in other calibers to have the same proportions as their ‘magic’ 6.5mm 142 grainer. With the exception of the 220 gr .308 bullet, all of the other bullets on the trend line in Figure 1 came out after the 142 (I think). Note that the 220 gr bullet is also the farthest from the trend line. OK enough speculation, let's get back to work.

Scaling of the Ballistic Coefficient
It’s time to take the next step in our exploration of scaling. So far, we’ve seen how area and volume change when length is scaled. We’ve taken a close look at the effects of scaling volume (proportional to weight), and discovered that there are a whole series of Sierra Matchking bullets that are nearly exact scaled copies of each other (by design or by accident). The next logical step is to bring area into the mix.

d = diameter of the bullet in inches

i is the ‘form factor’ The form factor is a multiplier that relates the drag of any shape to a standard shape. Similar shapes have similar form factors; more on the form factor later.

For now I’d like to examine the format of the BC equation. Notice how mass is on top, which means increasing mass increases BC (already knew that). Diameter squared is in the denominator, so making a bullet fatter reduces BC (already knew that too). So what does the fancy equation tell me that I didn’t already know? Well, you knew the idea, but the equation tells you how much of a difference these things make. Knowing about how area and weight scale, we can determine the BC for bullets of neighboring calibers and similar shape.

1 For simplicity, this equation does not include the term that accounts for non-standard atmospheric conditions.
2 This is the average advertised BC for the velocity range: 2000 fps to 2850 fps. The form factor calculated using this BC is also good in this speed band.