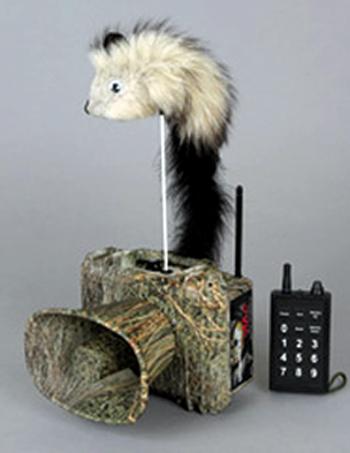 E.L.K.
E.L.K. of Gardiner, Montana, offers a squawking life-like magpie that can be ordered online for $40. The magpie sounds off for 40 seconds, then goes silent for 20 seconds, and then repeats the sequence. This decoy could be very effective in the West where magpies often sound the dinner bell for coyotes. Visit www.elkinc.com or call 800-272-4355.

Both sound and motion are produced by this unit from Flambeau Minaska.


FLAMBEAU
Another decoy option is Flambeau’s Lone Howler Coyote Decoy, a full life-sized decoy with realistic legs to lure in the most cautious coyotes. The rear legs can be folded to make the decoy sit, and the legs can be removed for transporting or storage. The decoy stands 20 inches tall at the shoulder and weighs 7 pounds. This model retails for about $90 and can be ordered online at several Web sites. Flambeau’s Flocked Lone Howler decoy is much like the original Lone Howler coyote decoy with a championship quality life-like carving as the mold. The features include a realistic paint job, wire frame, and faux fur overall with the flocking (looks like real hair). This decoy also has a motion tail. Suggested retail price is $135. For in-their-tracks stopping power the company recommends placing a white rag or rabbit pelt in the decoy’s open mouth.

Flambeau also sells the famous Rigor Rabbit, one of the first movement coyote decoys onto the hunting market. This realistic foam rabbit quivers and dances under control of a 30-second on/off timer that’s built-in. The company also offers a simple, motionless standing foam rabbit on a stake, the Predator Rabbit. Flambeau also sells the MAD Minaska call and critter combo. More details are at www.flambeauoutdoors.com or by calling 800-457-5252.

This Flambeau Predator Rabbit looks just like the real thing to coyotes.


FOXPRO
If you need the newest coyote deceiving decoy, FoxPro has released the Jack Attack decoy. The unit features two toppers (a white rabbit or black bird) and can be remotely operated. The Jack Attack with a base retails for about $110. More details are at www.gofoxpro.com.

The Jack-n-the-Box is another FoxPro motion decoy with a small dancing tail at the tip of a long flexible wire. This decoy is for sale in outlets everywhere and operates in four speeds: fast, medium, normal, and random. The Jack-n-the-Box decoy weighs about 9 pounds and retails for about $120. The Prairie Blaster base box has a built-in speaker and the call can be remotely operated. The unit operates for hours on four C batteries. FoxPro also offers a battery pack and a fast charger.

MOJO
On the less-than-ordinary side of the decoy equation, MOJO’s plastic woodpecker decoy retails for about $25 and has one side wing that rotates thanks to a small motor powered by four AA batteries. You can hang this decoy high up on a tree or fence post so it is visible and attracts from great distances. When operating and waving the wing, it looks from afar like an injured woodpecker and draws attention. MOJO also offers a small furry pup — the Puppy Dog — with a small twitching tail atop a long thin wire. The motion attracts attention while the realistic in size and shape pup whimpers canine whines. The woodpecker decoy retails for about $30 and the Puppy Dog retails for about $40. The company also offers the Critter, a motion decoy with a brown fur-covered base, metal stake, and four-legged fur critter atop a long flexible wire. Another odd decoy in MOJO’s line is the MOJO Hawk, a realistic hawk in a fighting position to resemble a hawk that’s captured a meal — and is easy pickings for a hungry coyote. The wings move thanks to a 6-volt rechargeable battery that’s included. More details are at www.mojooutdoors.com or by calling 318-283-7777.

MONTANA DECOY COMPANY
One other decoy option is Montana Decoy Company’s Kojo Decoy. This standing coyote look-alike is a silhouette printed on canvas. It easily folds to carry and store, and it weighs only a pound. This decoy retails for about $40 at www.montanadecoy.com. The company also offers the Fawnzy, a small fawn folding decoy printed on cotton/polyester fabric. Details can be obtained by calling: 888-DECOY98.

Decoys that resemble an easy-to-grab-meal, or another coyote, are causing coyotes everywhere to carelessly rush in, or to pause long enough for placement of an accurate shot. Should you add one to your next hunt? Deceiving decoys are definitely worth considering.


The VARMINT HUNTER Magazine, a 208-page publication put together for shooters by shooters. The Varmint Hunters Association, Inc. hosts several 600-yard IBS matches, a coyote calling contest, and an annual Jamboree in Fort Pierre, SD. The Jamboree is a week-long shooting event known as "a summer camp for shooters".