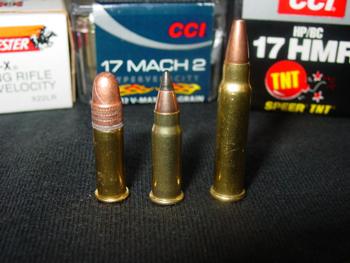 The Ultimate Squirrel Rifle: The 17 Mach2

There have been many arguments over the years about the best gun for squirrels… from the pellet rifle to the 12 gauge shotgun. But if a vote by the amalgamated order of real squirrel hunters was taken today I suspect the runaway winner would be the 22 Long Rifle. There’s no question this little round has provided the meat for many a stew pot, and has been providing this service all the way back to the year 1887. That time span has allowed the 22 Long Rifle plenty of time to gather many fans, and for that reason it will be very hard to unseat from its throne. Make no mistake, the 22 Long Rifle cartridge is a mighty fine squirrel round. A quality 22 rifle with match ammo can have good accuracy out to fifty yards, and certainly very few squirrels are gathered past that distance. But as much as I like this dandy little cartridge I believe its reign as king of the squirrel rounds cannot last forever. My prediction is it will be replaced by one of its offspring within ten years… the 17 Mach2.


Introduced by Hornady Manufacturing in 2004, the 17 Mach2 is a 17 caliber rimfire cartridge based on the slightly longer CCI Stinger version of the 22 Long Rifle case. The 17 Mach2 case was given a 20 degree shoulder and necked-down to accept the .172 caliber V-Max bullet originally developed for the 17 Hornady Magnum Rimfire. The typical bullet weight is 17 grains and reaches a muzzle velocity of 2100 feet per second (just about two times the speed of sound, ergo the Mach2 designation); at 100 yards the bullet is still traveling at 1530 feet per second.

The overall length of the cartridge is about the same as a 22 Long Rifle, but it is almost twice as fast and considerably more accurate. This performance alone should move it to the position of the ideal squirrel round. As this statement is put in writing I can sense the hoards of squirrel hunters demanding, “Just why do you think the 17 Mach2 can replace the millions of rifles chambered for the 22 Long Rifle? My great granddaddy put food on the table with one of these, and this was the rifle I learned to shoot with.” Why, indeed? Just keep in mind… for this discussion we are talking about the serious business of squirrel hunting, not plinking or shooting cans.

Now I don’t know if you hunt squirrels at fifty or more yards with your 22 Long Rifle, but you can do it with the 17 Mach2. And you will more than likely bring home some game. Let’s take a quick look at the trajectory of this little hummer using numbers from CCI, the ammo manufacturer. Sighted in at 100 yards the bullet is 0.1-inch low at 25 yards, 0.7-inch high at 50 yards and 0.8-inch high at 75 yards. So, based on a 100 yard zero, when you find a target at 25 yards just aim and pull the trigger. At 50 to 75 yards you may want to aim about a half-inch low, and at a 100 yards you are right back on the money. How would you handle those shots with your 22 Long Rifle? And are you confident that you would, in most cases, make a clean hit?

Of course a 100 yard shot at a small, elusive squirrel requires an accurate cartridge, and this is another area where the 17 Mach2 shines. The 17 Mach2 uses a copper-jacket bullet rather than the typical lead bullet in the 22 Long Rifle, and that simple difference makes a whale of a difference in accuracy. Using a good rifle, groups of less than an inch at 100 yards are not uncommon with the 17 Mach2, making a head shot not only doable but almost guaranteed… if the shooter does their part. Naturally feats of this magnitude cannot be expected with a 17 grain bullet during wind storms, earthquakes , sleet and the likes thereof.

Admittedly, there is one area where the 17 Mach2 does not fare well against the 22 Long Rifle, and that is cost of ammo. The price of a box of ammo has just about doubled over the last few years and now runs somewhere close to $8 for a box of fifty. And this is roughly the same price as the 17 HRM, another rimfire cartridge that offers more performance (although a little too much for squirrel hunting). The good news is that the price is expected to subside considerably when the present hording of ammo has been satisfied. The primary reason for the higher cost over the 22 Long Rifle is that neat little copper-jacket bullet with the plastic tip, the one that provides that superb accuracy. But looking at the situation from a hunter’s point of view, the price is not really excessive… considering that one box of ammo could translate to fifty squirrels simmering in gravy.
Next page: The Ultimate Squirrel Rifle >