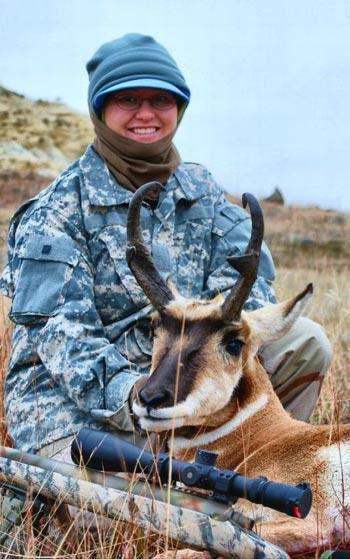 Without a doubt, antelope are one of my favorite game species to hunt. Antelope are not as exotic an animal as elk or brown bear but they pose their own special challenges when attempting to stalk within a hundred yards or closer. A hunter has to be very aware of wind direction, terrain features, and where the animals are looking. Not long ago I guided my wife on her first antelope hunt. We met with some frustration the first day but managed to get everything right the following morning.

Opening day of antelope season found us visiting friends and family that morning but we managed to get out to the field that afternoon. Hunting pressure had already been imposed on one herd of antelope we were planning on hunting and the buck we had spotted was no longer with the herd. We spent a great deal of time scouting for another herd and a decent buck. We made a couple stalk attempts but our positions just weren’t right and the wind gave away our position along with the antelopes’ outstanding eyesight. Opening day was a bust for us but we had a couple more days to get within range of a nice buck.

The second day we were up early and dressed prior to morning light. My wife was one month post C-section from our first child but in good health and her strength was coming back. Regardless, I carried the pack and her rifle while she was in the lead. We both had binoculars so we could try to locate the antelope. We are very lucky in that my wife’s family has a nice amount of land and a herd of antelope were spotted not far from the ranch house the night prior. We decided to head out from the house on foot and hopefully we could find the herd before they spotted us.

We had hiked close to a half mile to the west from the house in a narrow valley that ran west to east. A nice sized ridge was on our right and separated the valley we were in from a much larger valley on the other side. The other valley to the north had a creek bottom that ran down the middle with plenty of trees. After hiking for the nearly half mile and not seeing any antelope, we decided to take a peek over the ridge into the other valley. What we saw made us both smile. The herd we were searching for was on the far side of that valley also heading in a slow walk to the west, nearly straight across from our current location. The herd was just walking slowly and not in a hurry whatsoever.

We quickly scanned the terrain and decided to continue on our side of the ridge but pick up our pace significantly in order to get ahead of the herd. We would then come to the end of the ridge we would be paralleling where we should be able to see the antelope coming down the other valley. As we reached the end of the ridge we climbed about halfway up and skirted around the hillside so we had a better vantage point of the valley to the north. I quickly handed the rifle to my wife and she got settled into a solid seated position behind a rock on which she rested the bipod of her rifle. As we waited for a few minutes the antelope never showed up, and I began to wonder if they had changed directions. I quickly checked the wind and we had the wind in our favor at this point. It was blowing from the northeast so I knew the antelope hadn’t winded us. We decided to slowly work our way around the hillside further until we could see back to the east of the valley we had last seen the antelope in. No luck. We then went back around to our side of the ridge and climbed to the top of the hill we were on so we had a superior vantage point from which we might be able to tell where the antelope went. As we reached the top of the hill we stayed on our hands and knees and crawled forward eventually laying down in the prone with our binoculars. We soon spotted the herd as they were lying down on a hillside which was on the north side of the creek bed and in a sunny area. We hadn’t been busted and the herd was still nice and calm. My wife and I were several hundred yards away so we formulated a plan for our route into our final firing position.

We would have to cross an open field on our side of the creek which would be in plain view of the herd of antelope before we would reach the relative security of concealment which the creek bed would provide. As we backed down the hillside once again onto our side of the ridge I told my wife that we would hunch over single file and close together with me in the lead. She should stay right behind me and place her hands on my belt line. It was my intent to mimic another animal as we crossed the open area and walk slowly straight toward the trees. With any luck the antelope would be unconcerned with some strange looking deformed animal walking through the valley as long as it showed no sign of aggression. My wife laughed out loud at me and asked, “so you want my head up your butt?” I had to laugh as well, but it was the only thing I could think of. Thankfully I hadn’t eaten chili the night before.

So off we went, her hands on my belt line and a constant giggle emanating from my rear end. Once we reached the safety of the trees we both had a good laugh about what we must have looked like. I lost sight of the antelope just prior to the trees and they hadn’t moved during our crossing, probably because they were laughing at us as well. I decided to place our pack down just inside the tree line and only carry the rifle along with my binocular. From this point we had to walk slowly as dried tree leaves and twigs were scattered across the ground. We made our way to the creek bottom which was another couple feet deeper than the rest of the creek flood plain. As we turned back to the east I raised my binocular and scanned through the trees in the direction of the antelope and managed to see that they were still lying in the same spot on the hillside. From this point forward my wife and I communicated through hand and arm signals as well as numerous confused facial expressions.

We stalked as quietly as possible and seemed like we practiced some form of hunting yoga as we twisted around tree branches and stepped over roots protruding from the creek bank. At one point we finally crouched into a hands and knees crawl and slithered like a drunken snake into a position that was a mere 100 yards from the herd of antelope. The grass on the very top of the bank between us and the antelope was only about 6 inches high but provided enough coverage for me to work myself back into some form of contorted pose that I’m sure has an official yoga name, but I’ll just call it uncomfortable. My Steiner 10X42 Peregrine binocular gave me a nice clear view through the grass of the herd of antelope and there were three bucks present. The nicest buck was positioned to the right side of the bedded herd and was facing to the left calmly keeping an eye on his does.

I squatted back down and whispered to my wife that the antelope were still there and the buck was on the right hand side of the herd. I started to hand her the rifle and then asked if she just wanted me to put it in position for her. She nodded in agreement so I pulled the Harris bipod quietly down into position and slowly moved the bipod legs up onto the top side of the creek bank. The barrel protruded slightly but I had placed the rifle there very slowly and hoped that it hadn’t attracted the attention of our prey. As I tried to contort myself back into my uncomfortable yoga pose I immediately saw that the herd was now standing instead of lying down as they had been a moment prior. I whispered to my wife to get on the gun and load a round. I had already opened the rear scope cap for her. My wife was a champ and quickly but quietly got behind her rifle and worked the bolt of her custom built Surgeon action .308 Winchester tactical rifle. Her scope had been dialed down to about 12 power and she found a buck in her crosshairs immediately.

I was also watching through my binoculars and noticed that the really nice buck of the bunch was still lying down. “He’s still lying down, slightly to the right of the buck facing away from you. Do you see him?” “I got him, he’s pretty” was the response I received. “Hold for the center and send it,” was the direction I gave. I heard my wife give the familiar natural exhale I had trained her to do prior to taking a shot and my eyes never came off the buck.

At the sound of the shot the herd scattered, half starting out right toward us while the other half ran to the north up another draw perpendicular to the creek bottom. The buck however just lied there, his head bobbing down then back up momentarily before starting back down. The buck made no attempt to stand and his head gently fell forward one last time.

My wife had made a perfect heart shot from an uncomfortable half sitting half kneeling field position. We had just made the perfect stalk on a group of animals known for being skittish and possessing superior eyesight. We had located the antelope from several hundred yards away, planned a stalk, and executed our plan to perfection. This was my wife’s very first antelope buck and she was ecstatic at the effort and results garnered from that effort. The perfect stalk, we had just set the standard for ourselves.


Nicholas Gebhardt has been an active hunter primarily pursuing mule deer, antelope, coyotes and prairie dogs since he was old enough to legally hunt. Nicholas is a precision rifle competitor and uses the knowledge he gains from competition shooting to aid in his ethical taking of game in the field under most any condition. He enjoys custom rifles and is usually in some form or another of either planning or building the next one. Nicholas earned his B.S. in Wildlife Biology from the University of Montana and is a Captain in the Montana National Guard.