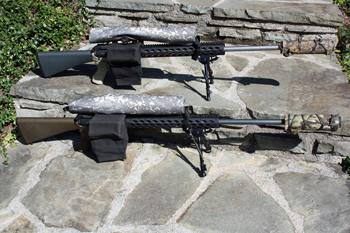 Since I wrote the article, “The Black Rifle Comes of Age” for this magazine in January 2012, there have been many more positive changes and additions that I’d like to review for your enlightenment. Wow! Have there ever been some changes! Many new magazines devoted to them as well. These changes have taken place because of the ever growing demands for more accuracy and handling qualities of the Modern Sporting Rifle.

Back then, I thought there would only be refinements to existing parts of the AR since I felt most everything had been made that could be made for the AR. The only constant seems to be the continuous changes in way ARs are built and the parts that are made for them. More than likely there will be more changes down the road but here’s what I have seen and used that really makes the AR a better Modern Sporting Rifle.

Of course, this isn’t all the changes and improvements, but just the few I have used or have some knowledge about. Continuing changes are what makes the AR such an interesting rifle! I’m all about getting the most accuracy and enjoyment out of shooting the AR, and this article is primarily going in that direction. Believe me, they can be just as accurate as most bolt action rifles, and more than many if you pay attention to the details.

Here's one type of adjustable gas blocks. There are several styles on the market to meet various needs


Adjustable Gas Blocks
One of the newest developments is the adjustable gas block. This is perhaps the best thing to ever go on an AR to improve function and help improve accuracy. There are several styles but they all do one thing vastly better than the standard gas block, and that is controlling the flow of gas back to the carrier. You know of course that gas pressure is what runs the bolt and thereby feeds and ejects rounds to and from the chamber. Too much pressure also beats the bolt and carrier against the recoil spring and buffer as well as the shooter. This causes accuracy to suffer, along with cases and bolts. With the adjustable gas block, you can literally dial in the minimum amount of gas needed for function. This will greatly save wear and tear on the parts as well as make the shooting much more pleasant.

Don’t be intimidated! Adjusting the block is very simple. It only takes a few shots and turns of the adjusting screw to get to the minimum gas needed to function reliably. It’s that easy! The shooting experience will be much more pleasant and accurate. It’s a win- win addition and probably THE BEST change in the AR system, so far.

The twins, Wicked Wanda on the bottom and Little Wicked Nell above. chambered in 223 A.I. They are incredibly accurate, in part because they have super triggers, superb barrels with adjustable gas blocks, and Nightforce scopes. Both are wearing suppressors with heat shields, brass catchers and Scope Shield Alaska covers. The “girls” have had Cerakoting done to their A2 stocks and Wanda had her barrel coated as well. Each will group five rounds inside a half inch at 100 yards almost all of the time!

Suppressors
These are not really a part of the AR, but let’s talk about suppressors. Back in 2011, there were 285,000 approved by the BATFE, and in 2014 that number grew to over 571,000! There is now a magazine devoted to them! If your state allows the use of suppressors, and at least 39 states do, you should check them out. I highly recommend them. Like the adjustable gas block, they improve accuracy and the enjoyment of shooting the AR.

Suppressors are legal in most states and many, about 34 states, allow hunting with them. Be sure to check state (and Federal laws just to be sure) prior to hunting and if traveling, make sure you are legal going to or through other states. On the range, your fellow shooters will definitely appreciate it!

There’s a big difference between a muzzle brake or no brake and a suppressor both in noise levels and accuracy. The suppressor wins in both categories. It also tames recoil so you won’t miss the brake. I don’t know about you, but I tend to flinch! Two big reasons are recoil and the loud muzzle bang. Suppressors minimize both of these so you will shoot better and enjoy shooting even more. When I introduce people to shooting suppressed, the grins just keep coming! Anyone new to shooting will definitely enjoy it much, much more with a suppressor.

True, if the bullet is leaving the rifle at faster than sonic speeds, it will still cause the sonic crack. No getting around that fact. However, the crack is downrange and that crack shouldn’t be damaging to your ears. I’ve even used a suppressor with great success on a bolt gun in 7 STW with a 150 grain bullet leaving the muzzle at 3200FPS! Much sweeter to shoot than with the brake I did use.

If you hunt with it, the quarry won’t know where the sound is coming from. A groundhog found that out when I missed on the first shot. He ran to his hole because of the dirt kicked up near him; but he didn’t go down. Just sat there wondering what that was all about. My next shot didn’t miss because I kept him in the scope and didn’t have to bolt another round into the chamber like a bolt gun would have required. Hunt varmints with a suppressor and the farmer and his neighbors will like it and likely you’ll have more places to hunt.
Next page: The Black Rifle Revisited >