Taking Care Of Number One 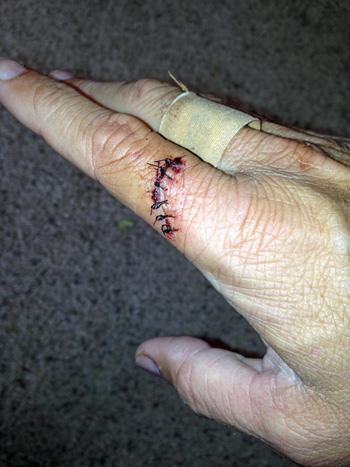 There is never a good time to cut yourself, but doing it in the backcountry - far from a hospital - is one of the worst times. I’ve done it and I know many friends who have done it to varying degrees of severity. Not all cuts are serious, but when they are, you can’t afford to be without proper materials and a plan.

EHM's Editor was helping skin out the neck of an elk when a dull blade resulted in a buckling of the wrist and loss of control of the blade. It swung wide and into his offhand. This isn't a good place to be cut when you have work to do. Luckily, he was able to get to an Urgent Care within six hours.


It Can Happen Anywhere, Anytime
It isn’t too difficult to imagine a scenario involving a serious knife mishap, because so many of us have experienced accidents. Picture a couple of hunters in the Wyoming backcountry who have just taken an incredible herd bull after a week of effort and toil. They’re euphoric as a result of the experience, but very tired from the physical effort and long days on the mountain. Photos are taken and the day gets late. There is now somewhat of a rush to get the bull taken care of and hung in the trees away from the carcass before dark, because they’re in grizzly country and the bears are still roaming.

They both have knives and go to work on the bull, one skinning from the shoulders up and the other working on the hind legs. Both guys are working fast and one of them asks for help from the other to hold the leg while he cuts off the quarter.

The hunter making the cuts is struggling to get through the hip joint with his now dull knife and bears down on it, snapping the tip and shoving his knife right into his thigh, burying it to the finger guard.

Stunned, he jerks it out and blood immediately pours from his leg, soaking his pants. His “fight or flight” sympathetic nervous system takes over and injects a surge of epinephrine (known commonly as adrenaline) into his system. His pupils dilate, his blood pressure drops with some initial peripheral vasodilation and his heart rate skyrockets. He nearly passes out standing there, but sits down because he is now light-headed.

Fortunately for him, his partner had taken a first-aid/CPR class and is somewhat composed. He knows that he needs to apply direct pressure to the leg and try and stop the bleeding. After 20 minutes, the wound appears to have stopped bleeding, but the pain has set in and his leg is swelling up because of the cut quadriceps muscle.

Elk Hunter Magazine is one of a very short list of print magazines that I read these days. Very, very well done!​
-Len Backus-​
They are three miles from their tent, eight miles from the trailhead, and many hours from civilization…and there’s no cell phone service. To complicate a situation that is dire enough on its own, there’s still a bull on the ground that needs taken care of and it’s getting dark in grizzly country.

The injured hunter limps his way back to camp slowly while his partner finishes up the bull. The next morning, the uninjured hunter hikes over to an outfitter’s camp a couple miles away and fortunately gets some horseback help to get them out of the mountains and to an emergency room.

You can see how things can get bad in a hurry out there. You’re basically throwing all of these horrible variables into the same pot: a fatigued hunter, uneven ground and work surface, a sharp (or even worse yet, dull) knife, unorthodox positions while cutting, abnormally long distance from medical care, and other tough logistics.

Lucky but unlucky is how I look at most mishaps such as the scenario above: unlucky to have it happen, but lucky it wasn’t worse or fatal. But luck really shouldn’t have as much to do with it. Had the hunter simply been more careful at each moment, it probably wouldn’t have happened.

It happens to all of us at some point. As I mentioned in our last article in this series, I managed to stab my calf at 13,000 feet in December in exceptionally bad circumstances, resulting in a small arterial bleed. While I came out of it okay, it could have been much worse.

Just this past fall, EHM’s Editor, Ryan Hatfield, managed to lacerate his offhand index finger while doing some last-minute “mop-up” work with a dull knife, putting too much pressure on the blade rather than taking the time to freshen up the edge.

The fact is that over the course of your hunting career, you’re going to sink a knife into dozens upon dozens of animals while in precarious situations and positions. Chances are it’s not a matter of “if” you get cut, but “when…and how bad”.
Next page: Taking Care Of Number One >