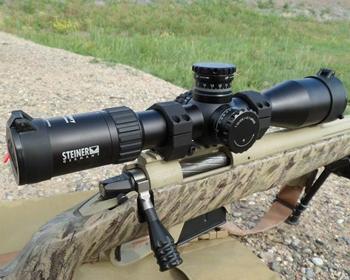 Steiner Optics reentered the riflescope market a few years ago, and just released the 3-15X50 Military scope in 2013. This optic is obviously marketed toward the military as well as shooters that desire a high end scope for competitive shooting, hunting, or any other purpose. Steiner has clearly done their research and utilized their optical expertise to build a very nice scope that is elegant in appearance, refined in adjustments, and robust in construction.

While conducting the evaluation of this scope, I compared the optical performance to a Nightforce 3.5-15X50 F1 as well as checking the Steiner’s adjustment reliability, in addition to a minor “torture test.” This review is about the Steiner offering but considering that the Nightforce F1 is in the exact same configuration, magnification range, as well as comparable in cost, I felt the comparison would provide some suitable data regarding the Nightforce, which has been around for several years and remains highly regarded for optical/build quality.

(Nightforce in back and Steiner in front)

( Nightforce at top of picture, Steiner on the bottom)


The Steiner 3-15X50 Military riflescope is elegant yet rugged in appearance. The black anodized finish has a slight sheen to it that gives a hint of shine in bright sunlight, but the scope also has a distinct military appearance with the 34mm main tube and three large turrets around the adjustment housing. The scope is 14.25 inches long and weighs 36 ounces. Turret caps have a coarse machined knurl which is easy to grasp in any weather condition with and without gloves. The parallax adjustment turret is marked with specific indicators in meters out to infinity and is co-located with the reticle illumination which is the outermost turret. Reticle focus is handled at the ocular with a fast-focus eyepiece as per usual with European optics. The elevation turret has milradian (mRAD) adjustments (marked to 15 mRAD per turn), provides two full revolutions with an innovative second-turn indication, and also has a zero stop function. The windage adjustment turret is marked to 6 mRAD left and right and has a stop built in so that the turret can’t be rotated past half-revolution, only 6 mRAD either left or right is marked on the turret but my scope actually travels to 7.5 mRAD. This particular scope has the first generation MSR reticle located in the first focal plane (FFP) so the reticle subtensions remain true at any magnification.


The magnification adjustment ring has an outer surface of rubber with grooves molded in to provide a textured surface as well as a raised portion to aid in grasping. Adjustment of the magnification ring is both smooth and firm throughout the entire range assuring that it doesn’t move without the operator making it happen, and turns counterclockwise to increase magnification.


Parallax adjustment is also very smooth and firm enough that I don’t have any concerns about it being inadvertently moved without the operator knowing it. The illumination has 11 intensity levels with the lowest levels being suitable for NVD operations and also has built in “off” positions between each intensity level so the user can select the brightness setting that is most desirable with the next detent being an off position in either direction. Only the very center section of the crosshairs illuminates. Both the elevation and windage turrets provide tactile and audible indications of adjustment. Click spacing is fairly close with a nice crisp and snappy feel, but making a single 0.1 mRAD adjustment is simple without over-dialing. The firmness of the turrets is adequate and again, I have no reservations about the turrets being accidentally moved.

After I mounted the Steiner scope I established a 100 yard zero. My rifle is extremely accurate so I decided to immediately check for return to zero and tracking. I utilized a paper target at 100 yards and had small rocks at a distance of 500 yards. I verified my trajectory correction for the rocks with a ballistics program and then came right back to my previous 100 yard group. After dialing back to my 100 yard zero, I was pleased to see that the shot was in the exact same group. Return to zero was good after the small amount of turret travel for a 500 yard shot. I dialed my turret again for the 500 yard rock, and the impact was exactly as before. From there I dialed the turret all the way to the very top end of travel and then back to my 100 yard zero. My shot was again back in the same exact group as before. There was no impact shift after adjusting the turret all the way to the top and back down. I did not check the windage turret at that time and I did not perform the normal “box test” but instead elected to see if the 100 yard zero remained true after making several major adjustments. While utilizing this scope on my match rifle at a wind reading clinic, my zero remained exact after multiple adjustments to various distances out to about 700 yards. It is also worth mentioning that the elevation adjustments have matched my ballistic calculator exactly so I am confident that the turrets adjust in true mRAD. Further testing has shown the turrets to continue to track true on a tall test target with spacing measured out in one mRAD increments to a total of eight mRAD. The impact on the target was exactly where it should be with every adjustment. The tracking on this scope is as perfect as I can test.

While conducting observations of the optical quality in comparison to the Nightforce F1, I spent approximately one hour comparing the two and thought the optical brightness, clarity, and resolution all favored the Steiner, but only by a very slim margin. I did not evaluate or specifically look for chromatic aberration nor evaluate under adverse or low light conditions.

I was at the family ranch in Eastern Montana while evaluating the optics during the Fourth of July holiday, so I asked five family members to compare the two scopes for optical quality. None of the family members are well-versed in top end optics and had no idea about these scopes except that the scopes were “expensive.” Specifically, I asked them to give me their opinion on which scope was brighter to their eye and also asked them to look at trees, bushes, rock faces, etc. at a distance of about 1555 yards and also look into the dark shadows that were present and see which scope gave them better resolution and contrast. I set both of the scopes to maximum magnification, parallax to infinity, and removed the sunshade I had on the Nightforce. The day was bright with few clouds in the sky and temps were already in the high 80’s. Two people thought the Steiner was brightest while three people thought the Nightforce had the edge. After asking about tree branches and a rock face that was heavily shadowed, three people thought the Steiner gave better contrast while the other two thought the NF was better. One person commented that after looking into the shadows, the Steiner gave a better depth of field and he was better able to resolve rocks and fissures. Another evaluator thought the Steiner was brighter immediately when he looked at a specific tree and could see the bright background through the branches. My “take away” from these observations is that the optical quality is at least equal to the Nightforce F1 and possibly a bit better with contrast and resolution.
Next page: Steiner Military 3-15X50 Rifle Scope Review - 2 >