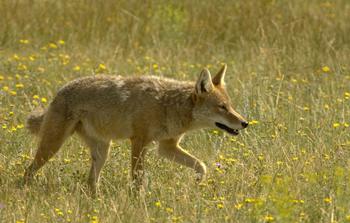 I grew up in south Alabama, and hunted and fished there through all my teen years and never saw a coyote. There just were not any coyotes (or armadillos) in the South at that time. The first coyote I ever saw was while I was on an elk hunting trip in 1974. He was mousing in a field near Hartsel, Colorado, and we were just passing through on our way to the hunting area. I found myself more interested in hunting that coyote than I was in the elk hunt.

I have always had a love of accurate, flat-shooting rifles, and this went hand in hand with coyote hunting. This started back in the 60's when I would go crow hunting with my older brother and a buddy of his who had a Remington 700 ADL in a 222 caliber. It only had a 4X scope on it, but for a kid who had previously only shot an open sighted .22 this gun was a dream come true. You could kill a crow about as far away as you could see it.

I saved my pennies until I had enough to get my own rifle. Since I did some deer hunting also, my brother suggested something a little bigger than the triple deuce would be better, so I bought a Rem 700 BDL in 25-06. With a 9 power scope and 87gr hollow points, this gun was a tack driver. A crow wasn’t safe unless he was past the quarter mile mark, and using the 117 gr Nosler, this was a whitetail’s worst nightmare.

My love affair with coyote hunting started after moving to Colorado in the summer of '75. Deer and elk hunting were always fun, but you are limited to a few days each and one animal each. With coyotes, you could hunt year round AND actually make a little money doing it.

The first coyote I ever killed was a big beautiful male that I shot at an altitude of about 10,000 feet in November that first year. I had spotted him from the highway, and made a stalk to get to within about 250 yards to make the shot. He had a beautiful prime hide, with long black tipped guard hairs and a snow white belly, so I skinned him and salted the hide, thinking this was the right way to do it.

I had heard that the hides were worth money so I started asking around. I was pointed in the direction of a local trapper who ran a corner gas station. When I proudly showed him my coyote that was skinned by splitting him right up the belly, I thought he would cry! He told me that coyote would have been worth $100 if I had skinned him right. Now I was the one crying!!! He took me around back to his fur shed and showed me a few coyotes that were properly taken care of, and graciously offered to show me how on my next one.

This took a little while, but finally I killed another one. This one was a smallish female that I shot with the above mentioned 25-06 at about 150 yards with an 87gr hollow point. There was a hole through the middle that you could run your fist through. When I took her down to my trapper friend, he said she was not even worth skinning.


I started hunting coyotes in earnest then. I read everything I could get my hands on about calling, but I had very mixed results with it. I called in a few coyotes but mostly when I blew a call they would run in the other direction. Many times I would spot a coyote and sneak as close as I could, then try to call him a little closer. The normal routine was to get within 500 yards, set up, and blow the call. The dog jerks its head up, comes a couple of steps in my direction, then takes off like a streak in the opposite direction.

I learned that to be a successful coyote hunter, you have to hunt much like the coyote himself--be an opportunist. Get them wherever you can, by whatever method you can. My best results came from spot and stalk tactics. I would glass feeding areas from a high spot with binoculars, and then plan a stalk to get within shooting range.

A coyote's main diet consists of mice and meadow voles, but they are opportunistic hunters and will eat about anything. One of my most productive methods was to spot a carcass of a ranch animal or deer or elk and to pick a spot from which I could approach unseen and silent into comfortable rifle range for an ambush. If the carcass wasn’t in a spot that was conducive to this, I would move it to a better location.

I had permission to hunt on several big ranches to help keep the coyote population under control, and would have the ranchers tell me when they had an animal die. I remember one horse carcass in particular that I killed twelve coyotes off of in one winter.

After my younger brother moved to Colorado a couple years later, we partnered up and went into the fur business. We hunted and trapped coyotes, bobcats and fox throughout the 80's. We made friends with several different ranchers and became their official coyote controllers. One sheep ranch in particular was having a difficult time with coyote predation, and we were more than glad to help out with the problem. That next year we sold 2 batches of 75 coyotes, one in December and one in March.

After I started having some success and was harvesting some fur, I experimented with all sorts of different calibers and bullets to effectively kill coyotes, yet not destroy the fur. I learned to be quite a seamstress with dental floss, sewing up holes in my hides. It didn’t take long to give up on the 25-06--it just damaged fur way to much. I bought a Remington 700 bdl varmint grade in a 22-250 after shooting a friend’s rifle in this caliber. It was almost as bad as the 25-06 if you used factory soft nosed ammo.

After getting some hand loading equipment I started experimenting with different style bullets. I tried the 55grain FMJ bullets, thinking that would be the ticket, but found that if you hit a coyote in the ribs it would punch a needle hole through them and they would run for miles. If you hit them in the spine or the shoulder they still blew big holes in the hides.

When Sierra came out with the 52gr BTHP Match King I tried some of them. The accuracy was superb. I once shot a 10 shot group with this rifle that was about 1/2 an inch. I had an old Weaver V-12 with the double horizontal range finding crosshair mounted on this gun and it would shoot. I found that the Match King bullets were just the ticket--enough expansion to kill coyotes dead in their tracks, but not so much that it blew monster holes in the hides. Of course, this was before the days of rangefinders, but I managed to kill coyotes at some unbelievably extreme ranges using my range finding reticle and Kentucky windage.

When I saw the .17 Remington, I knew I had to try one, but I had limited success with this caliber. It would definitely kill coyotes when you hit them well, and you would hardly be able to find the hole. But hit them marginally and it would still tear huge holes in them, and the accuracy of this caliber was not quite what I liked to see in a varmint gun. It would barely shoot one inch groups on a regular basis.

Most recently, I bought a 204 Ruger that is like a "death ray" on coyotes out to about 400 yards. This caliber may be the best choice out there for the fur hunter. Two years ago I killed eighteen coyotes with this rifle, and all but one were one-shot bang/flop kills. My rifle is a Ruger m77 stainless, and it likes the 32 grain Hornady bullets the best. It will shoot half-inch groups with factory ammo, so I don’t even hand load for it.

Coyote hunting will test your skills in so many different ways. The effective kill zone on your average coyote is about the size of a half gallon milk jug lying on its side, so needless to say, you have to have good marksmanship skills. Get a good flat shooting rifle and practice with it a lot.

Spot and stalk hunting requires you to do a lot of demanding physical stuff like hiking around hills and crawling on your hands and knees, keeping out of sight until you get to within your comfortable shooting range. I love bipods for this type of hunting. I mostly take shots from the prone position, so the short ones work the best. When calling, I like the longer ones so you can shoot from a sitting position.

Calling works best for me in the earlier part of the hunting season. That is when hides start getting prime and the younger coyotes are more gullible to calling (I define the season as starting in September and going through February). By the time December rolls around, they are either dead or well educated to most calling techniques.

I also like a shorter barrelled, easier handling rifle, as shots are usually closer and sometimes you need a fast follow-up shot or a second shot if you call in a double. My favorite coyote calling rifle is a Ruger Mini 14. If you are hunting with a partner, think about one guy using a shotgun. Number 2 lead shot in a 3" magnum 12 gauge will anchor a coyote out to about 75 yards.

My current project is a super long range coyote rifle. It seems coyotes must read shooting magazines, and they know the effective range of most varmint guns to be about 500 yards. Thus, you can usually get one to stand still and feel safe past that range. I am building a 6 X 284 to shoot the 107gr and 115gr vld bullets. I hope to be able to dial this gun in to be able to make those 600 to 1000 yard shots.

Be careful about drinking the water if you are ever out west. It is probably better to stick with the bottled stuff, because you never know when you will get a dose of "songdog fever" like I did 34 years ago. I thought I was cured when the fur market crashed in the early 90’s, but I recently had a relapse, and this is a very virulent strain!
Join the discussion of this article with the author HERE at the Article Discussion Forum.Allen Jones is a water well contractor in central Colorado. He has lived and hunted with gun and bow in Colorado since moving there in 1975. He is a former state champion and all-American trapshooter and also loves long range shooting, varmint hunting and Texas hold em poker.