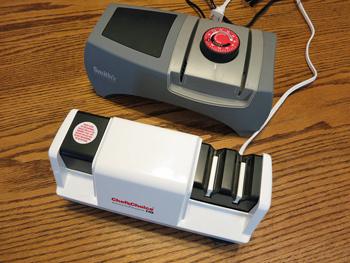 Achieving a fine cutting edge by hand is a talent that few have developed. It takes skill, time, knowledge of cutting edge angles and patience. In this day and age who has time for that? We seem to desire the fast easy way. This must be the reason for the many mechanical and electric sharpeners on the market.

An America’s Test Kitchen evaluation of several sharpeners, both mechanical and electric, motivated me to purchase and give the top sharpener of that evaluation for a housewarming gift. The top choice was the Chef’s Choice electric. The Chef’s Choice is one of the most highly favored sharpeners on the web, which gave me a great opportunity to compare it with the excellent Smith’s Model 50281 Adjustable Edge Pro Electric Knife Sharpener. Both are in the same price range. A couple of us got together and ran both through their paces with similar cutting tools.

The Smith’s Adjustable Edge Pro Electric Knife Sharpener is not a tool to work on your machete or axe, but is made to address edges on chef’s, kitchen, hunting and tactical knives. It is also not designed to put the initial edge on a DIY blade. There are more appropriate means to perform that activity.

Generally speaking, both the Smith’s and Chef’s Choice will effectively put a good edge on any cutting tool for which they were designed. Which of the two results in the “better” cutting edge? The testers were evenly divided on this topic. However, all testers gave the Smith’s top marks for ease of use. Personally, the Smith’s allows me to achieve a much better edge than I can achieve by any other method.

Differences between the two sharpeners is where the Smith’s pulls away from most, if not all, other electric sharpeners. Size, weight and solidness are in the Smith’s favor. There is no vibration or movement of the unit even when excessive pressure is put on the blade.

Design of the cutting edges is another feature. The cutting “wheels” are spiraled and arranged like two worm gears giving an effective cutting edge much longer cutting surface than several individually spaced cutting wheels. The “worm” gear design also provides for filings to fall, thereby keeping the grinding surfaces free of residue.

I selected and bought this sharpener for my own use after doing a fair amount of online research. After using it for a year, I like it so much that I shipped it to Roy after asking him to write this unbiased review article.

Len Backus, LRH Publisher​
However, they said, 16 degrees is too sharp for filleting fish, where a 20 degree edge is appropriate. The guys at the leather shop indicated that it is wise to maintain the manufacturer’s edge angle. If attention is not given to the angle, tools wear out too fast, resulting in higher equipment cost and loss of production time while sharpening tools.

Use of the angle adjustment is straightforward. If your knife is not listed simply insert the cutting edge into the cutting wheels and adjust the angle while observing blade fit in the cutting groove. A delicate pass across the coarse wheel will reveal which direction to turn the angle adjustment. Those who use knife-like tools on a daily basis indicate sharper angles don’t hold edges as long as larger angles do. Their recommendation for longer periods between sharpening is to maintain the manufacturer’s suggested angle.