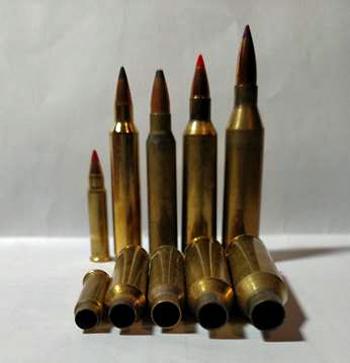 As I dust off my guns from the winter infestation of cold and snow, I think about the gun options for the varmint season. Phrases like, “speed kills” and “going out with a bang” usually come to mind. Despite the usual suspects (Figure 1), I find myself migrating to the best ratio of effective range, cost, and explosive terminal performance.


A few things I enjoy about hunting varmint are the the almost unlimited supply of targets, challenge of hitting smaller targets, and the terminal performance show. Seeing a varmint take flight is quite the display of power, and cannot be obtained with lower velocity cartridges. Imagine the contrast between dropping a water balloon on the ground, and throwing it on the ground; throwing yields quite the splat! Take for example, the .22 LR and the .17 HMR. The .22 LR is one of the most affordable rounds, and matched with a semi-automatic, can decimate varmints out to 150 yards in short order. Both are rimfire, but the 17 HMR has two distinct advantages. It is 1200 fps faster, and uses bullets that are half the weight. This combination creates a satisfying ‘pop’. The 17 grain hollow point bullet fragments easily with the increased velocity, but the 38 grain .22 hollow points do not.

There are two downsides to speed, these include the cost of ammunition, and barrel life. The latter will not be discussed in this article, as most individuals will not need to replace their barrel. Buying factory loaded ammunition can be quite costly for cartridges other than .22 LR, .17 HMR, and .223. Table 1 compares costs for some of the common cartridges.

Conversely, reloading ammunition can yield savings around 50%. Using the table above, shooting 500 rounds of .243 could pay for another gun. In addition to costs, shooting long strings of high velocity rounds will heat a barrel quickly. Heat causes two problems, point-of-impact (POI) change, and accelerated throat wear. Sporting contours heat up quickly, and can see POI changes in as little as 5 consecutive shots. Waiting 3 to 4 minutes between shots will keep sporter barrels zeroed, and will reduce throat erosion. A dedicated varmint gun should include a heavy barrel to mitigate POI changes.

Another small detail to selecting a varmint gun is matching the twist rates of barrels to small bullets. This must be done to properly stabilize the bullet. The .223 is commonly offered in 1:9, 1:10, and 1:12 rates of twist, depending on the manufacture and model. AR platforms can have twist rates as tight as 1:7. Dedicated varmint rifles have a slower twist rate, such as 1:10 or 1:12. These slower twist rates favor smaller bullets, and may not stabilize larger bullets.


Nevertheless, advantages of smaller caliber projectiles (.17 and .20) are the weights. Lighter bullets do not require as much energy to achieve higher speeds. They also have very low recoil, so spotting the shot is a breeze. They are good choices if excessive pelt damage will be a concern. However, the light .17 grain bullets drift substantially in the wind, which limits their effective range (Table 2 and 3). Smaller calibers can be less forgiving when used on larger vermin such as coyotes. Better bullet construction is required to hold the high velocity bullets together, and achieve better penetration. On the flip side, the larger .22 and .243 based cartridges have the ability to shoot light and heavy bullets. Heavier bullets are better for longer ranges, higher wind conditions, and larger game.

In summary, Table 2 shows that choosing any small projectile hurtling at speeds nearing that of an anti-tank projectile, will be effective. Varmint bullets are not high ballistic coefficient (BC) competitors, as seen in Table 3. If long range varmints are the goal, larger bullets with higher BC’s are needed to mitigate wind effects. All calibers mentioned are great for dispatching varmints; although, there are noticeable changes in target reactivity when moving up in caliber and speed. Even if the caliber is not increased, moving from 3600 fps to 4000 fps will net obvious results. If a starting point is needed in a decision making process, then the 4000 fps barrier is a great place to begin looking.


Jared Bauder has been a lifelong hunter, and uses his engineer background to study all things shooting and hunting.