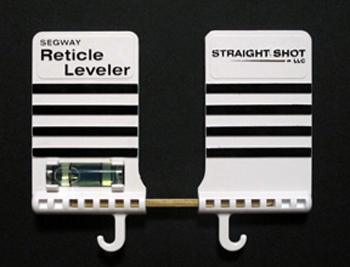 Each year I install at least fifteen to twenty rifle scopes, with most of them for long range shooting. I have a small tool box full of different types of scope leveling tools and mounting tools. It usually takes two levels to do the job, one level for the action and one for the scope.


This is important for long range scopes with reticles marked with MOA or MIL points or that have a turret marked off for the distance you are going to shoot. If you sight your scope in at 100 yards and the elevation is not level with the level action, you have a problem which escalates the higher you adjust the reticle for a long shoot. This is caused by the scope not tracking straight.

Segway Reticle Leveler MK-lll – back side.


The folks at Straight Shot developed an easy way to make your scope level to your rifle. It is called the Segway Reticle Leveler MK-lll. The leveler has three parts as you can see in the photo, one wing with a metal square bar, a second wing with a level built in and a heavy duty elastic band.

The Segway Reticle Leveler MK-lll is available at our Long Range Hunting Store
Click to expand...

First you find a flat spot on your mount or action. You take one wing off and slide it under the scope. Then you put the other wing on the bar. You then attach the elastic band under the rifle to the hook on the bottom of each wing. Then, move the rifle left or right till the bubble is centered. Now, with the scope in the lowest setting and your eye relief set, turn the scope till the elevation line is level to the Segway’s line. One side of the wings has large lines and the other side has thinner lines. The thinner lines worked better for me. Then you tighten the rings down while watching the level. I did this in a gun vise but also checked it off hand. You are now ready to sight in the rifle.


I use sighting in targets that you can find in at any good gun shop. The ones I use have a large diamond in the center and a smaller diamond in each corner. This is all printed on a 1 inch grid paper. When using this type of target, make sure the target lines are level. Now, with the scope level and target level you are ready to go sight in your scope, knowing your long range adjustments will be correct.