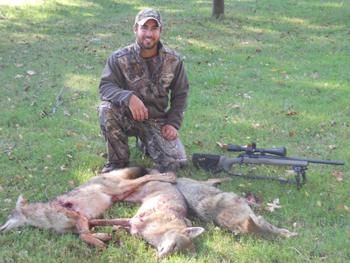 Locating
After moving into my new home in the middle of October, I was more than excited to venture out and explore the surrounding area for potential coyote hunting spots. My house was located just outside of a small Missouri town that consisted of 243 people. I had done my homework on Google Earth and noticed there was a plethora of open farm land nearby covered with draws and hedgerows. Needless to say, the land looked promising in holding a few coyotes.

After a long day of unpacking, I found myself standing on the back porch with an open reed howler in hand, watching the sun settle over a vast cut cornfield. Anxiously I stood, listening for a song dog to break the silence. Thirty disappointing minutes later, the only thing that broke that silence was the buzz of the yard light kicking on. I then raised my howler to my mouth and let out a long lonesome howl that seemed to echo for miles. I waited, and before I could answer myself a group of coyotes lit up two fields over, then another group began to serenade from north, and a few more answered farther away from the south. As I listened to the orchestra of coyote yips that seemed to come from nearly every direction, I couldn’t help but to grin and think to myself, “Game on!”

Scouting
The following morning, I left my rifle in its case and threw my Nikon Edge binoculars in the truck with one mission on my mind: intensive scouting. I drove down the nearest dirt road in the direction of the closest group of coyotes I had located the night before. To my surprise, a quarter mile down the road I spotted three full coated coyotes about 500 yards out. As I sat and observed them, I analyzed where they may have came from, where they were going, and possible set up locations based upon different wind directions. I also noticed that the coyotes paid little attention to my truck, and were most likely lightly pressured if at all.

After watching them for a while I drove to an old farm house where the landowner lived. I then introduced myself to my new neighbors and joyfully gained permission to hunt the land in which the coyotes resided. The land owner also informed me that he had seen as many as seven coyotes passing through his pastures at once!

I spent three more days scouting the land and patterning the group of coyotes. My buddies questioned why I had not already tried my luck and made a few sits in the new area. I explained to them that I knew the coyotes were there, I also knew they were not being pressured by any other hunters, and most importantly I knew their morning and evening patterns. I felt my odds were far better after gaining all of this information rather than hunting the area blindly. However, I did feel plenty anxious to put all of my intel together, throw on my camo and let some fur fly.


The Hunt
It was time. The wind was perfect, and the morning air read 37 degrees. As I pulled my freshly washed scent-free camo from the dryer I couldn’t help but fantasize of the hunt to come. After parking my truck by a cattle gate, I threw my rifle over my shoulder and quietly slid between the barbed wire fence. I then cautiously made my way to the top of a hill where I rested my back against a lone tree.

This particular tree sat on the highest point of the property and I figured it would be a good vantage point, allowing me to see a coyote coming from a good quarter mile. At first light I pulled my range finder from my pocket and quickly marked distances: pond bank 100 yds, edge of CRP 250 yds, tree line 375yds. With a slight cool breeze in my face I let out a single young female howl. Almost instantaneously four coyotes flew out of the tall CRP grass to investigate the female intruder. I slowly raised my Remington tactical topped with a Nikon 6x18 mil-dot scope and brought the lead coyote into focus just as it passed the pond dam. With a swift “Wooof!” all four coyote stopped dead in their tracks and stared in my direction. I slowly squeezed the trigger and watched the lead yote take a dirt nap eighty yards from where I was sitting.

I quickly grabbed my howler and began a series of pup distress sounds that slowed one of the fleeing coyotes to a bouncing halt at the edge of the CRP. “Boom…pop!” My second shot hit its mark, causing the coyotes’ feet to shoot out from under him. Turning to my left, I spotted a third coyote dust trailing straight away from me towards the distant timber. Holding half a mil-dot high I sent a 55 grain ballistic tipped prayer his way and surprisingly watched him do an end over end somersault.

Within fifteen minutes after sitting down I had three coyotes dead in the field at the blow of a single howl. At that moment all of the prep work and scouting I had done the week before tremendously paid off. Getting to know an area and keeping tabs on coyote activity can play a huge role in predator hunting success.


Heath Baker's biggest passion is predator hunting, and he would do it every day if he could. He reloads all of his own ammunition and loves to tinker with guns of all shapes and sizes. Heath is working towards his degree in Administrative Social Work. He is originally from Nevada, Missouri, a small town in southwest Missouri consisting of about 8500 people. Heath loves to write, and has taken creative writing courses in college.