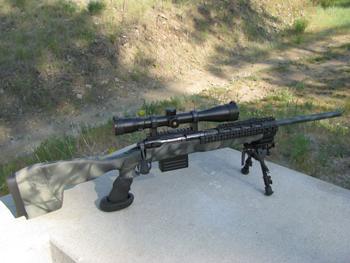 Based on the overwhelming response to my previous article, Long Range Rifle On A Budget, Len and I discussed creating an article to walk you through a rifle build using a Savage rifle. The goal was to show you what could be done simply and inexpensively to turn a vanilla grade rifle into a tack driving custom.

To ensure the tack driving part of the equation, we were able to get support from Shilen Rifles Inc and Berger Bullets. Shilen Rifles supplied me with one of their superb SS Select Match prethreaded and chambered barrels ready for headspacing, while Berger Bullets supplied their match grade 22cal 80gr VLD to get the most out of the barrel. Their support on this project is greatly appreciated.

In looking over the many projects shown on this board, I decided to take a different approach and put together a 'tactical' rifle in 223, something that would excel in the field and have many of the desired features common to 'professional' rifles. You will notice a number of styling cues from European and AR based sniper rifles.

The completed rifle would make a great varmint rifle or compete in tactical rifle shoots, even F class. Ease of handling, good ergonomics/balance and light weight were project goals. The rifle, complete with bipod but without ammo, tips my bathroom scale at 12lbs. A pound could easily be knocked of with a lighter stock build, more if the barrel was fluted (10lbs unloaded is easily accomplished). Without the bipod, the rifle balances in front of the mag, making it very easy to shoot offhand.

In a larger cal, it would certainly work wonderfully as a long range big game rifle. Something that would only require a new bolt head, mag, and barrel plus 15mins of your time. Yes, you can be smoking coyotes, prairie dogs, steel gongs, and Alaskan moose by changing a few parts.

As has been my SOP, very little is done to the action. The accutrigger was adjusted for a crisp breaking 1.5lbs pull (spring swap). The bolt timing was adjusted to reduce the bolt lift and smooth its operation. The bolt handle was exchanged for one with an oversized bolt tactical bolt knob created by a Canadian dealer. That's it!

I have never found the typical blueprinting to be beneficial or required to this family of actions due mainly to the unique floating bolt head. Many of the alignment woes that plague solid front locking actions like the Rem simply don't affect the Savage. Saves a whole bunch of time and money to correct.