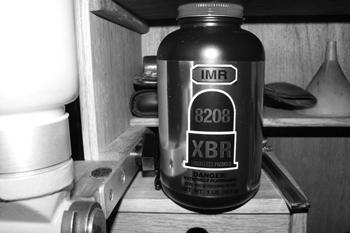 Thunderbird T-322 or T-32 has been a favorite powder of top Benchrest shooters since first packaged in the ‘70’s. This was a military surplus powder (Dupont 8208) that was first used by Walt Berger for Benchrest shooting.

Walt was contacted by the folks at Thunderbird Cartridge Company to see if the 8208 that they bought had any application for Benchrest shooting. There were three lots of this surplus powder, and Walt found one to be better than the other two. He got a second opinion from Don Geraci. Both agreed that this one lot had the characteristics for which BR shooters were looking.

The other two lots were sold as Thunderbird 8208 and many found these lots to also be very good for BR use.

Thirty-plus years have passed since the introduction of this superb powder and it has become very scarce. Most of today’s supply of Dupont 8208 comes from pull down of 5.56mm military rounds. I guess that this is better than not having any, but it leaves a lot to be desired.

A New Supply
As the supply dried up, several in the Benchrest community contacted Hodgdon to see if they would produce an equivalent powder to this early 8208.

I am not sure how many approached Hodgdon with this idea, but I believe that Jerry Sharrett of Tennessee was one of the first. Hodgdon was hesitant to introduce a new powder that had a burning rate similar to some of their current offerings.

About two years ago, Lou Murdica again approached Hodgdon and they agreed to make a limited run of a powder similar to T-32. At first they said that they would produce a one-time run of 20,000 pounds.

After being well received by Benchrest shooters, and interest by the military, Hodgdon decided to add a new powder to their line of fine rifle powders.

This powder is NOT T-32, but it has properties that many will find to be exactly right for Benchrest shooting. It is packaged in a very attractive container. (Photo #1 shows a 1 lb. container.)

This powder has small extruded granules similar to the original T-32. It is light gray in color and seems to have a slower burning rate than either T-32 or N 133. It meters through my Jerry Hensler powder measure like a dream, and I don’t foresee any problem getting +/- 0.1 grain accuracy.

This new IMR 8208 XBR is made in Australia for Hodgdon and should be available by January 2010. I am betting that there will be great demand for this new powder.

Testing
I have heard that Jim Carmichel and Lou Murdica have been testing this powder with great results.

Today is October 23rd, and I have had a couple of test sessions with the new powder.
The instrument used for all of my testing is a Model B BAT-actioned /Leonard-stocked rifle with a .308 bolt face. (See Photo #2). I use this platform for both short range Benchrest as well as 600 yard competition. In the former I use a 6 PPC, and in the latter, a 6mm Dasher or 6XC. It is topped with a 36X BRD Leupold that has had its internal adjustments “frozen” by Jackie Schmidt and rests in Gene Bukys’ adjustable mounts.

When I received the pound of 8208 XBR from Hodgdon, the 6mm Dasher barrel was on this rifle. I decided to begin my testing with that chambering.

Although the loads shot well (see Photo #3), I would strongly recommend that one start at a lower level. The brass showed signs of high pressure…especially in the 32.0 grain loading. I would recommend starting at 30 grains and work up to possibly 31 grains with this bullet.

This powder will produce over 2900 fps with this bullet at safe pressures, but it may be a little too fast for the 105-107 grain bullets. I normally use Varget and Re 15 in the Dasher. After I get through testing the powder in the 6 PPC, I will try it again in the Dasher or perhaps in the 6 XC. Lou Murdica said that he used 36.0 grains behind the 105 Berger in his 6 X 47 Lapua. Since the 6XC is very similar to this cartridge, this may be a guide for loading the 6XC. Remember, always start low and work up.

Session Two
After a brief session with the 6mm Dasher, I turned my attention to the 6 PPC. After removing the Dasher barrel, I screwed a Bartlein gain twist (14-13.25) 6mm PPC on and prepared some rounds for it.

This barrel has shown a preference for Del Bishop’s 65 grain flat base bullet built on an 0.825 jacket. He calls them 7 SC ogive because the die maker said that they were a “7” but Del states that he believes that they are closer to an “8” ogive. Therefore, the “SC” stands for “subject to controversy”.

Dutifully, I set up the Oehler Model 35 Chronograph, and proceeded to check out this new powder. I fired one round of the 31.0 grain load to check pressure and get the rifle zeroed. The pressure was okay and after a quick scope adjustment, I was ready to proceed.
Although the weather in Louisiana has been dismal in October, I caught a break in the rain long enough to shoot a few groups. The temperature was 51 degrees and there was a cool wind from the west (9 o’clock) at 10-15 mph.

I started with the 30.4 grain load and fired all three 4-shot groups quickly without cleaning. (Photo # 4 shows the three groups.)

The 30.4 grain load registered 3266 with a standard deviation of 6 fps. The group measured a miniscule 0.109 inches on the soggy target.

I was most impressed with these early results. I will try some different bullets and perhaps different barrels in my next excursion.

Session #3
On my third trip to the range, I shot another Bartlein barrel. This one features a 13.5 inch conventional twist. The bullet used was Bart’s 65 grain BT. In this session I will use 31.0 grains of the 8208 XBR throughout. The variable that I will test is two different primers. (Wolf Small Rifle vs Federal 205’s)

The skies cleared and the temperature was 45 degrees. The skies were cloudless and the wind was from 7 to 8 o’clock at about 4 to 8 mph. Conditions were good except for some pesky mirage.

After firing one round to foul the barrel and establish zero, I proceeded to shoot two, 3-shot groups with loads having Federal primers. I did not have wind flags in place for the groups that I chronographed. The velocity average for those 6 rounds was 3221 and the SD was 12. The two groups measured 0.245 and 0.201.

Next, I fired two, 3-shot groups with the same load except these featured Wolf Small Rifle primers. The velocity was 3223 but the SD was an extremely low 3 fps. Accuracy was 0.114 for the first group and .201 for the second.

Earlier in the week I shot this same load in a gain twist Bartlein barrel. Both barrels were 21 inches long, but the GT registered almost 100 fps higher velocity than the 13.5 standard twist. Both were 4 groove, .237 bore barrels.

What caused the velocity difference? My guess is that the flat base bullets seated into the lands caused higher pressure than the boattail bullets jumping about 0.010 inch. Both bullets weighed 65 grains, but the flat base had a longer bearing surface.

After chronographing the velocity of the two loads, I set up the wind flags and shot one group with each type. With the Federal primer, I got a 0.142 group and the Wolf-primed rounds printed a 0.206. This barrel has served its time and is now ready for retirement…if you know what I mean.

I returned home and decided to try one more barrel before submitting my findings to Dave Brennan. Next, I am going to try a Krieger barrel chambered for the 6XC cartridge. For data I e-mailed Lou Murdica and asked did he have any data for this larger capacity case. He said that he was shooting 36.0 grains behind a 105 gr. Berger VLD in his 6 X 47 Lapua. Since the Lapua case and the 6XC are almost identical (the XC has a large primer and the Lapua a small one), I decided to start at 35.3 and work up to 36.0 grains of powder behind the same bullet.

I loaded 3 rounds that were seated to jump about 0.010. I normally don’t jump VLD bullets, but I may start after seeing the results at the range.

My first group with the 6XC was to zero the rifle. It consisted of the 105 Berger Target VLD pushed by 35.3 gr. of 8208 XBR. These are the ones that were jumped. Without the benefit of wind flags, they formed a 3-shot cluster that measured 0.171 inches.

After adjusting the scope, I chronographed the 35.3 gr. load with the bullets lightly into the lands. The velocity was 3003fps with a SD of 12. Stepping up to the 35.7 gr. load, the Berger bullets tripped the screens at an average of 3025 with a SD of 6. I did not seek any more speed, so I did not try 36 grains. I took down the chronograph and put up some wind flags. I shot several 3-shot groups that averaged about 3/8ths inch. None of the groups fired with the bullets seated into the lands matched the first group that had them off the lands.

Conclusion
In my opinion Hodgdon has a real winner with this new powder. It is very versatile as shown by my tests in three different cartridges and four different barrels. In the 6XC it will not match the velocity of Reloder 17, but it seems to be more accurate. In the 6mm Dasher, it not only has superb velocity but has excellent accuracy. Its real niche seems to be the 6 PPC. Although one must use more of it than N 133 or T-32, it will give super accuracy at most of its velocity range.

One may ask, “Are you going to buy some?”
The answer to the above question is yes. I have already ordered a case of four 8# jugs from my local supplier.