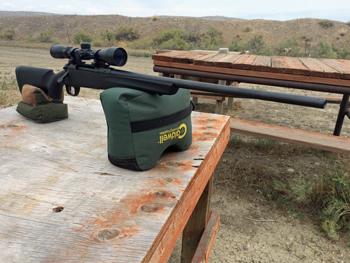 It’s not pretty, it’s not flashy and it’s not classy, so if you are looking for a showpiece, keep looking. Its simple, textured exterior doesn’t set it apart from anything else you may see on the shelf. In actuality, if I hadn’t been asked to do this review, I would have never noticed much more than the existence of the Remington Model 783. It comes in a cardboard box full of Styrofoam and plastic like any other rifle. It even comes with a scope like many other entry level rifles, so why the Remington 783? What is the idea behind the 783? Why does it exist? Remington has the time-proven 700 model and several other mid/low end models. I didn’t know why either, but I was interested in finding out.

The day I picked this rifle up from my FFL holder, I took it home, opened it up and gave it a quick once over. This thing looks like a Savage, Crossfire trigger looks like an Accutrigger, barrel nut, and plastic stock. Okay, Remington, what is your angle? It comes out of the box with a scope mounted on it, so I wanted to test true out of the box accuracy, which goes against my nature.

The first thing I do with any rifle is disassemble it and put it back together to make sure everything is right, but I resisted my OCD impulse and left it alone other than I cleaned the barrel, chamber and action and greased the lugs, but that was it. I grabbed three different kinds of factory 30-06 ammo and was off to the range. A rough bore sight and I was on the bags behind the trigger. The first few shots with Barnes VOR-TX 150 gr TTSX hit the paper in a halfway decent fashion. Probably about 1.5 moa, but I knew this wasn’t the best it would shoot.

We needed to get used to each other, so I kept shooting while letting it cool between shots. Around shot number 6, I found myself making small adjustments to the focus on the scope. Shot 7, still not totally focused, shot 8… okay, I must be getting eye fatigue, so I decided walk down and look at the target and spend some time resting my eyes. I came back, adjusted the scope and shot again. Now I know it’s not me! I look through the scope and the only thing I can see is that its daylight on the other side, but that’s it! I called the Remington rep and he promptly sent me another scope.

When I took the old scope off, the rings basically fell off of the bases. The only thing holding them there was the rigidity of the scope tube. At this point I decided I would remove the bases and torque them properly and secure with Loctite. I did not lap the rings or do anything but torque the screws in the mounts to proper specs, the reason being that this is an entry level rifle and more than likely the average target consumer of this rifle will not have the tools to lap scope rings, so I am keeping this as simple and as straightforward as possible.

Once the new scope was on I was back at the range. The scope is surprisingly clear for one that comes with an already inexpensive rifle. It responds decently to adjustments and functions as expected. I settle in at 100 yards and start printing groups. The Barnes Vor-TX 150 gr. TTSX is still hitting the paper around 1.5 moa. I move on to Remington Hog Hammer ammo loaded with 168gr. TSX and these ones blow me away with .4 and .6 moa 3 shot groups back to back.

Now I am excited because I haven’t even checked the torque on the action screws or adjusted the trigger and this thing is shooting great! Now I am excited to see how the third type of ammo shoots, Remington Hypersonic ammo with 180 gr. bonded PSP bullets. On a cool, fouled barrel it prints a decent 3 shot group, 1.1 moa. Not as exciting as the last but still something I can work with.

Now that I have tested the “out of the box accuracy” I finally get to tear this thing apart! First the scope, rings and bases come off and go directly into the “Do Not Resuscitate” pile. Then off comes the stock, which has pillars installed. The trigger assembly is pretty simple and straightforward. I go ahead and adjust it down to as light it will go, which happens to be 2 lbs 4.7 oz. I clean it all up and notice the stock is actually quite stiff for a mold injected stock. The rifle goes back in to the stock with ease and torques down nicely.

Now for the mounts and scope. It took a little digging but I finally figured out that the round receiver takes the same mount as a Savage 110, so I ordered a set of low Talley 1 piece mounts for it and bought a used Vortex Diamondback scope with the dead hold reticle. Not a high end scope but a nice scope that matches the price point of the rifle and will be very dependable and capable of making longer shots than the factory scope, which just had a duplex reticle. I ended up spending less than $200 on all of that.

Once I had everything collected and mounted on the rifle, I went out and got it on paper and zeroed in at 200 yards. Up to this point, other than the first factory scope, this project has come together fairly smoothly. No weird groups with fliers that I can’t explain, just simple straightforward repeatable groups, some better than others but repeatable nonetheless. At this point I have decided that the obvious best choice is the Remington Hog Hammer ammo with 168 gr. TSX, so the rest of my testing is done with this ammo.
Next page: Remington Model 783 Review >
Reactions: scrmblr1982cj8 and Duke33