Recoil Management: Take The "Ouch" Out Of Shooting 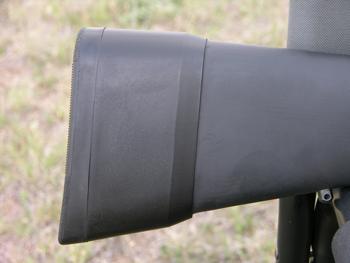 Recoil Management: Take The "Ouch" Out Of Shooting

Have you ever gotten home after a day at the range and reached up to your shoulder to feel the soreness, and then tried to rotate your arm, only to find out it hurt? If so, you are not alone in this sport. Recoil is a natural consequence of shooting. For you young shooters who can shoot anything up to a bazooka without feeling the effects of recoil, just wait. The effects of recoil to the body can be felt from your eyes to your toes. It will take its toll on your hands, wrists, shoulders, neck and right down your spine. Old injuries will stick up their ugly heads. Age has a lot to do with it also. Not only does it affect you physically, it can mess with your concentration also. The major problem it can cause is flinching, which in turn causes a loss of accuracy and more importantly a loss of confidence in your own shooting ability.

The grip area of the axiom.


My personal story started about 25 twenty-five years ago. I wanted to make a long range shot at a deer. I had picked a safe place from which to shoot, and I had built a flat platform in a tree. About 350 yards away was a spot where the does came out of the woods every evening. I had picked up a new Winchester model 70 in 300 H&H with a good scope for this hunt. I know I did not need this magnum to make that shot, but at the time it seemed like a good reason for a new rifle. You may ask, why 300 H&H? Well I started shooting in the 1950’s. During that time period, all the magazines could talk about were the H&H calibers. The .300 Winchester magnum had not hit the market yet. I had always wanted a 300 H&H, and Winchester made a limited run for one particular distributor in the 1980’s. My buddy and I each got one. I made the one shot one kill that day and put the rifle away. My buddy later sold his because of the recoil. Fast forwarding 20 years, I took the old 300 H&H out of the safe one day and loaded up some reloads. I sat down at my bench for an afternoon of shooting. Just a few rounds from the old gun made me ache. Back into the safe it went.

The butt of the Comstock.


A few years ago while at the SHOT Show, I saw the Knoxx Compstock. It is basically a Hogue over molded stock with a spring lever system built into the butt of the stock. I had tried a few rifles with muzzle brakes and found they caused a lot of ear discomfort, even when using good muffs. So the folks at Knoxx sent me a Compstock for my Winchester.

The Comstock on top with the Axiom.


The stock comes in a plain pillar bedded and an aluminum bedded version. Mine is the plain model. I loaded up some heavy bullets with a very hot load and went to the bench. I am always skeptical of gimmicks in the industry but I kept an open mind. After five rounds I was smiling and that smile got even bigger after shooting a total of twenty rounds. The recoil that the shooter actually feels is far less than with a factory stock. I have heard claims of up to 80% reduction in felt recoil. There is no real way to know how it will perform for you unless you actually shoot one. Recoil is determined in foot pounds by use of a formula using bullet weight, velocity and total rifle weight. It does not take into consideration the body type of the shooter, the shooting position or how the shooter mounts the rifle.

I decided to get a second opinion on the Compstock, so I loaded up some more maximum loads and took the rifle to the Lucy Creek Arms range where the owner, Tim Miller, tried it out. Tim, like me, was a little skeptical. He normally hunts with a 300 Win. Mag Ruger and knows the recoil. He sat down at his one hundred yard bench and proceeded to fire a few rounds while I photographed the session. After he shot a few, he looked up at me with a big grin and said, “John, that thing really works.” He then checked the spotting scope for group size and said, “and it shoots good too.” He liked it so much he finished off my reloads.

Since that time Knoxx has joined with Blackhawk, and now the stocks are sold through them. They have a lot of different styles now, and the list of the firearms they fit is getting longer. They have stocks for pump shotguns also. The Axiom stock on the Howa is a Knoxx/ Blackhawk stock but in a slightly different configuration.

The Compstock: A cutaway view of the recoil reduction system.


Recently I saw that they had come out with a thumbhole stock with double recoil reducing features built into the wrist of the stock instead of the butt. I ordered one from Blackhawk to fit my Remington LTR in .308. This particular rifle was capable of consistent groups under one half MOA with match ammunition. It took me about five minutes to mount the stock on the rifle. I pulled out a box of the same match ammunition I had previously used in testing and sat down at the bench. I shot a string of four shots. The recoil was reduced quite a bit, but I felt the Compstock recoil reduction was better. I decided to put the rifle down for a few days and give it another try later. The stock is designed to free float the barrel and give plenty of room for extra cooling.

Tim Miller of Lucy Creek Arms trying out the new Compstock on the .300 H&H.


After a week or so I cleaned the rifle again and started anew. I checked the mounting to make sure everything was tight. This time the recoil seemed less but my groups were up around a MOA. It very well may have been my shooting and the one half MOA increase is really not that bad. This stock is actually two pieces that fit together in the grip area (see photo). The action rides on the front piece and slides ever so slightly to the rear when fired. There is a storage area under the butt pad and it has interchangeable rubber grips. I found the use of the Axiom helped me get back on target quicker than with the factory stock.

Overall I give the Compstock an A+ and the Axiom Thumbhole stock an A- in their ability to reduce recoil. The stocks are very comfortable to use. If you are stock crawler, and by that I mean a person who has to have his eye right up to the scope, these stocks are not for you. You need to keep a good eye relief distance. When the rifle is fired, there is a slight compression of the stock. The amount is governed by the load being shot. For me this was not a real consideration and I did not even notice it. The stocks do not eliminate recoil, but they absorb quite a bit and what you do feel has been slowed down which makes it more like a gentle push.

They do sell a version with full aluminum bedding. I think I will try that setup next to see if it could maintain or improve the accuracy of one of my better shooting rifles. I will keep you informed.