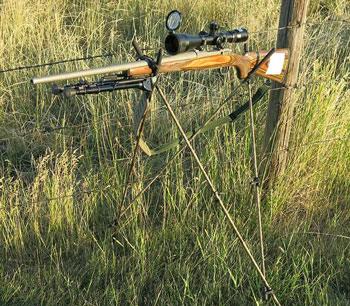 “HOLY SMOKES, these things are really built solid!” That was my first thought as I removed the Predator Supreme Shooting Sticks from the packaging box. I was expecting something lighter and possibly less sturdy. It was obvious from the second I laid my hands on these shooting sticks that they were built by someone that actually hunts, and that they were designed to last a long time. Everything from the beautifully camouflaged matte finished fiberglass rods to the heavy duty rubber connectors. These sticks were made for the guy that expects tough endurance from his equipment. These are not sissy cheapo shooting sticks made overseas somewhere. Each one is individually handcrafted right here in the good old USA by Steve Walker, the owner of Venum Outdoors.

I first saw these shooting sticks on Facebook in a coyote hunting success photo. What caught my attention was the front and rear support they provided the rifle. Most shooting sticks, especially in regards to predator hunting, just have one pair of crossed sticks supporting the front end of the rifle. I don’t know about anyone else, but while in a sitting shooting position, I have a real hard time holding dead-steady much beyond 250 yards with just the front of the rifle supported. When the shots are over 250 yards, I just have to hope I can slip into a prone position and shoot off my Harris bi-pod. However, one does not always get what one hopes for while calling coyotes. Often it’s either shoot from the sitting position or let the coyote walk. I don’t like that “let the coyote walk” choice very much. In fact, I’d say I detest that option. With these Predator Supreme Shooting Sticks I can hold very steady out to 350 yards, and in the hands of someone more skilled than I am, I expect they could make shots to 400 yards with them from a sitting position, thereby increasing one’s odds for success considerably on each coyote stand. Anything that increases odds for success on those crafty coyotes is a major plus in my book!

It wasn’t long after getting the shooting sticks that I just had to get them out in the field and try them out. The design of the sticks was plenty sound, and what I needed was a live coyote. So after work one evening when the wind was calm enough to get out and call, I took the shooting sticks out for their debut. I quietly snuck into my first calling location. Just as I sat down and was going to begin calling, out pops a coyote in the draw right in front of me. She’s only about 150 yards away. Heck, I’ve already got my rifle on the sticks, so all I had to do was find the coyote in the scope and trip the trigger. Bang, whop-flop, and done! Talk about an accelerated field test. From the time the Predator Supreme Shooting Sticks were attached to my rifle, to the time I dropped my first coyote with them was literally less than a minute. I remember thinking; “Hmmm, methinks I’m really going to like these sticks.” I can’t complain about the good fortune they brought me on that very first stand. Now the coyote, on the other hand, might have a difference of opinion, but she’s no longer capable of protesting. So it’s all good.

I walked across the draw and picked up the coyote and brought her back for a little photo shoot with my new shooting sticks. To be honest I couldn’t wipe the smile off my face as things usually (as in NEVER) go this easy for me. I love it when I get the oh-so-rare lucky break! Heck, I even had decent shooting light for the photographs and everything.


Since I had a little shooting light left I decided to work my way another half a mile down the canyon and set up again. I was about 10 feet from where I was going to sit down and call, when I caught movement out of the corner of my eye. You got to be kidding me; another coyote about 200 yards away popped out of a brushy draw and had no idea I was there. I quickly and quietly sat straight down while putting my rifle on the shooting sticks at the same time. I didn’t have time to set everything up on the sticks to support both the front and rear. I just used them like conventional shooting sticks and rested the forearm on the sticks. It’s nice, that in a pinch, (which I was in), they can be used this way as well. I let out a little bark with my mouth, and the coyote stopped and looked back. It was the last thing he did that day. KaPow! Coyote number two down. I was a little in shock and wondering, did that just really happen? Happen it did, and I was pretty darned pleased with the whole evening. When I walked up to the coyote I could see he was an absolutely beautifully furred male. I did try calling from the stand just for the heck of it, but nothing showed up. It was getting dark, so I decided to call it a night. I figured with the calm evening, and me firing off a couple of shots, pretty much everything in the canyon was on high alert.