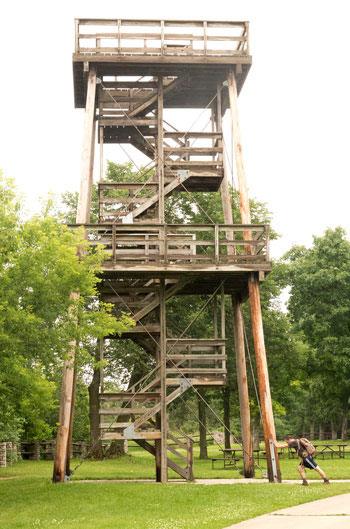 I am just an ordinary guy trying to prepare for and to maximize enjoyment of the physical part of my western mountain hunts in altitudes up to 10,000 feet. Over the years that I have been hunting in the west, the degree of my physical conditioning preparedness has varied a lot.

This article is not intended to give you a sophisticated list of exercises to do. Rather it is to open up discussion of the different practical ways we all choose for ourselves. And it is written in order to make the point that it is more important to actually do some exercise than to debate which is the exact best way. Develop a plan that you like and that you can stick with...and then DO IT!

I am motivated to write this article by how well my most own recent training did for me recently on my June 1, 2014 spot and stalk black bear hunt in the Wyoming Mountains.

I live in a very flat portion of Wisconsin at an elevation of 740 feet. Imagine what it would be like for me to hunt at 8,000 to 10,000 feet in rugged mountains without adequate physical training. Well I can say that I have never gone out for such a hunt without training, but last year on one of my mountain hunts my physical condition was not adequate.

I had hunted deer in mid-September last year in the Wyoming Range with a reasonable but not great amount of training. I got by ok on that hunt. Five weeks later I hunted elk in an even more rugged part of western Wyoming. I did almost no training in the 5 week time between the hunts. My body complained to me on all 5 days of the elk hunt. My guide was gracious enough not to complain about my conditioning but I was disappointed in myself.

So last winter when I knew I had a mountain bear hunt scheduled for June 1, 2014 I committed myself to be in much better shape.

I hate spending time indoors on an exercise machine. I hate doing exercise for the sake of doing exercise. Sometimes I joke that I'd enjoy pounding my thumb repeatedly with a hammer more than I would working indoors on a machine. But I did force myself late last winter to spend time most days on an exercise bike and on an inclined treadmill in my basement. Not a lot of time but enough so that when the snow finally left the ground (it was a very long winter) I was prepared to get outside and do more serious exercise without having to start from scratch.

I have had arthritis in my knees for many years. I had one of my knees scoped about 7 years ago. Most of the meniscus cartilage in one knee was removed at that time. So my right knee is pretty much bone-on-bone with little shock absorbing surface remaining. The left one has an intact meniscus but also lots of arthritis. My orthopedic surgeon is the Green Bay Packers' doctor. He told me I need to strengthen the muscles and tendons around my knees so that the joint is protected with each stride as the leg and foot prepares to strike the ground.
Next page: Physical Training ForMountain Hunts >
Reactions: Litehiker