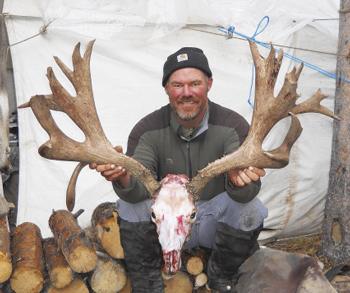 Wyoming began a non-resident point system for mule deer eight years ago. Many applicants got in on the ground floor and this year have tallied eight bonus points. There are currently just over 5,000 max deer point holders, so there’s a pile of hunters looking for the best. I talk to many of these hunters every year and get the same question every time: “What should I do with my Wyoming points? Which unit is the best to put in for?”

The above photos are just a few of the giant bucks taken in recent years by Non-Typical Outfitters. The fact remains, most monster mule deer in Wyoming are being shot in the rugged, high country units that only need 3 points to draw!


The units in the state that are the hardest to draw (take the most points for 100% success) are not necessarily the highest producing units for trophy quality deer. Wyoming does not have any late season migration or rut hunts to hold out for. Some of the units that were previously considered the top-tier were 128-129 and 101-102. You can still have a great hunt in those units, as well as some areas in the 80’s, if you can hunt a private ranch. There are some very reputable outfitters and it’s not a bad choice for a small number of hunters. The most consistent areas for trophy deer in the state with year after year opportunities are regions G and H. These regions encompass Lincoln County in mountainous western Wyoming and have the most historical entries in the Boone and Crockett record book of any other region in the state. They are still producing monsters today that rival, and even surpass, the famous “Morty”, “Goliath”, and “Popeye”.

So, why are these units not on most hunters’ radar? Often times, it is because of the hunt difficulty and the number of tags issued for the areas. This is not an easy place to hunt trophy mule deer guided or DIY. You will have to put on your “big boy” undies and man-up to be successful in western Wyoming. You are not going to have much success hunting from your truck window and having a leisurely cup of coffee while watching the sun poke over the mountain before heading out of camp. Perseverance and a positive attitude are the names of the game here.

The mountain peaks crest 10,000 feet and there is hardly a flat spot to be found. Realize though, that you certainly don’t have to be a tri-athlete to be successful! Realize also that success on the true giants is minimal (just like everywhere else). A hunter coming to western Wyoming with a positive mindset and reasonably prepared is going to leave with a world-class experience as well as a solid, very consistent run at a quality mule deer ranging from 175-185. That same hunter may have a reasonable chance at 185-200 inch deer, with the chance at a giant well over 200 inches as well as 228, 240-plus, and “Magnum” at a whopping 257. For me, score is not always a true judge of a giant, it is the experience that is more important.

These areas provide not only unmatched trophy potential, but a real high mountain, high alpine hunt experience that you just can’t get looking through a windshield. Getting to hunt these majestic animals in what has often been proclaimed “God’s Country” with horses and 10,000 ft. mountain peaks surrounding you, provides an experience that you need to see to believe. I have had many hunters that came hunting with us that have taken many other mule deer in other areas of the West. They have stated that the deer that they took with us is their most cherished, not because of the score necessarily, but because of the experience that came along with it.

Adam Johnson can attest to the fact that Western Wyoming is the place to smoke a giant buck. In 2013, he took this 240-class monster with Non-Typical Outfitters.


One example of this “can-do” attitude that is a must for this area of western Wyoming came with a couple of gentlemen who hunted with us this past fall. Adam Johnson and his dad, Robin Johnson, were hunting during the full moon phase, so spotting large numbers of deer was not in the cards. The weather didn’t cooperate so the difficulty level of finding big deer was increased. Conditions did not discourage them at all. They woke every morning before sunrise with a great attitude, hunted all day with a great attitude, and went to bed late at night with a great attitude. They both enjoyed riding the horses and looking at the epic mountain scenery. They relished the challenge of looking under every rock and tree for the buck of their dreams, optimistic that the big deer was just around the next corner.

​
For four days they exhausted our preseason scouting reports with their guide, Troy, and followed their gut intuition looking for that mystical buck. On the fifth day of hunting with the same positive attitude, their hunt was joined by some of our other guides who had filled out or whose hunters had given up and gone home. Robin missed a buck at first light that day and most hunters would have been looking to head for home, but not these guys! They were here to have fun and hunt until the last hour. Their strategy paid huge dividends! During midday, because of that full moon, a true Wyoming giant stepped out of the timber. What a bunch of teamwork and some fancy footwork, Adam got a shot and connected on the largest buck of his and the second largest buck that NTO has ever harvested. The deer scores 240 1/8. You’ll see the full story in a later issue of MuleyCrazy Magazine, so keep your eyes peeled. This buck is a testament to the opportunity that each and every hunter has when they come to western Wyoming to hunt.

Many of our bucks we locate months or even years before the season. Though on this hunt were hunting many bucks from our scouting, we had not had a confirmed sighting of this deer before. One of our clients shot a giant in the same area two years before and it may have the same buck! This deer did have a bullet hole that was at least a year old in his ear. It was at least proof someone out there has a great story about the “one that got away”.
Next page: Outfitters Insight: Wyoming - 2 >
Reactions: jayran