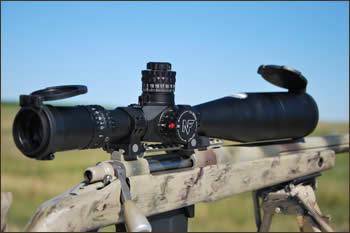 Discussions of premium rifle optics usually include the Nightforce brand. The consumer market in the precision rifle industry has been eagerly anticipating a feature-rich rifle scope from Nightforce since word got out that Nightforce was creating a high magnification front focal plane optic. The Nightforce booth at the annual Shooting, Hunting, and Outdoor Trade (SHOT) Show has displayed an example of this new scope, called the Best Example of Advanced Scope Technology (B.E.A.S.T.), for the past few years. Sticking with their business profile, Nightforce wasn't going to release the scope for consumer purchase until every detail of the scope was extensively tested and proven even though this process could drag out the release date for several years. The consumer market was nearly ecstatic when the B.E.A.S.T. was finally released in 2014. So, does the B.E.A.S.T. live up to the vaunted claim and the expectations of the consumer market? I analyzed the scope and put it through some testing to find out. Following is my analysis and review of the B.E.A.S.T.

The Nightforce B.E.A.S.T. comes as a complete optics package. Included with the scope are the famous Nightforce bikini lens covers, a lens cleaning cloth, a set of premium Tenebraex lens covers with the Nightforce logo, owners manual in print and CD, reticle diagram and information page, and a couple Nightforce stickers. This is the most inclusive contents package I have seen with any scope.

The B.E.A.S.T. from Nightforce is laden with premium features not found on many other optics and some features are only found on this optic alone. Starting at the front of the scope, it has a 56mm objective lens tapering down to a 34mm main tube, which both seem to be the current industry standard in high magnification rifle scopes. Next is the adjustment housing where the parallax, illumination, elevation, and windage controls are located. The B.E.A.S.T. can be had in either Minute of Angle (MOA) or Milradian (mRAD) adjustments and several corresponding reticles. Continuing back, the 34mm main tube transitions to the magnification ring which rotates clockwise to increase magnification from 5X to 25X. A First Focal Plane (FFP) reticle is utilized so all reticle measurements remain constant throughout the magnification range. The eyepiece housing contains the ocular lens measuring 46mm and utilizes a locking eyepiece focus as has been the standard on the Nightforce NXS line of optics. Nightforce has stuck with their design of integrating the eyepiece and magnification ring so the user can grasp the entire eyepiece housing and rotate to change magnification. The total length of the rifle scopes is 15.37 inches and weighs in at 39 ounces. The scope has a very nice matte black anodize finish, leaving very little shine in bright daylight, which hunters, shooters, and military personnel appreciate. Lastly, the B.E.A.S.T. is marked "MADE IN U.S.A." just forward of the adjustment housing.

Most of the design and technology advancements are found in the adjustment housing. Reticle illumination is a digital system by Nightforce called DigIllum. Reticle illumination is adjusted through a light bronze colored push button on the side of the parallax turret where intensity can be increased or decreased to the user's preference by repeatedly pressing the button once the illumination has been activated. The entire reticle is illuminated except for the actual numbers. To turn the illumination on, simply push the button and to turn it off, hold the button in for 1-3 seconds. Additionally, after the user has turned the illumination off, activating it again will return it to the last intensity level that was being utilized. As a final bonus, illumination color can be changed to either red or green by holding the button in for several seconds. The lowest settings in the green color only are compatible with NVG systems. The literature provided with the scope says that the illumination will automatically turn off after 60 minutes to conserve battery life.

The parallax control is marked with multiple hash marks as well as an infinity symbol, but does not include estimated yardage markings. This turret doesn't protrude as far from the side of the scope as the windage turret, so it is as streamlined as possible while still providing a proportioned turret.

Nightforce has dubbed the elevation turret the XtremeSpeed because of the amount of elevation that is capable of being dialed in a short amount of travel and time. This particular model scope has mRAD adjustments, so each click of the primary turret is 0.2 mRAD and provides 20 Mils of adjustment per revolution, which is the most of any scope I am aware of. The feel of the clicks on the elevation turret are the best I have felt on any Nightforce product. There is a firm amount of resistance required to make an input but not so stiff as to cause a bypass of an intended setting. I was unable to intentionally stop between clicks, which is a good thing. Two revolutions may be possible depending on the zero distance and how the rifle is set up. Being that the clicks are 0.2 mRAD, Nightforce did an outstanding job in providing maximum elevation potential in the turret and spacing the clicks far enough apart that it is readily apparent at a quick glance what the setting is. Other scopes in the market have clicks that are so close together that extra time must be taken to ensure the correct setting on the turret. The numbering on the turrets is also very well done and large enough to be easily visible without detracting from the aesthetics.