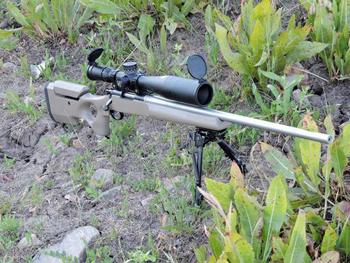 Walking down the line at a rifle range before a Precision Rifle Series (PRS) style shooting competition will remind grown men what it felt like to be a child on Christmas morning. As I meandered down the shooting line of my first competition I met many fellow shooters who were more than happy to show me their rifle and optic set ups and explain to me the pros and cons of each. As could be expected, custom barrels were the norm and aftermarket stocks and large tactical style scopes were plentiful. The more shooting systems I examined the more I became surprised at the lack of one particular brand of optics atop competitors’ rifles, Nightforce. I asked many of the shooters why they chose their particular optic over such a well-respected name as Nightforce. They almost always came back to the same answer - lack of first focal plane (FFP) offerings.

Reticle at 12x through the F1

Reticle at 5x through the F1


In PRS style competitions or in some hunting situations, shooters are frequently forced to engage targets at multiple distances in very short amounts of time. Time can be such a constraint that many shooters choose to use the subtensions in their reticles to quickly adjust for elevation and wind as opposed to dialing their turrets for each shot. With a FFP scope the shooter can always trust their reticle to be accurate no matter what magnification they are using. Conversely, if the shooter were to use a reticle with a second focal plane (SFP) scope they could easily forget to set the scope to the proper magnification and all their corresponding holds would no longer be accurate. While the SFP scope can be used just as effectively as a FFP scope, it requires the user to pay special attention to the magnification setting and they cannot simply adjust the power up or down without understanding how it changes the relative size of the subtensions.

While FFP vs. SFP is a topic that is debated weekly on every major internet forum and at every local gun range, there is no denying the benefits that can come from using a FFP scope for those who want to use their reticle to adjust for elevation and wind. With the growing popularity of PRS competitions so has the demand for more consumer offerings with FFP reticles increased.

Seeing the growing market, Nightforce (NF) decided it was time to release a FFP scope under $3k that would offer the features being requested by many shooters; the ATACR F1 was born. I received my sample of the ATACR F1 with the MIL-R reticle on a Friday morning at work and immediately opened it up. Handling the scope for the first time my initial impression was how incredibly solid the scope felt, and I guess it should, considering that it weighs a whopping 2.4 pounds. I passed the scope around to various colleagues at my office and they all had the exact same impression; the scope feels like it could be used as a sledge hammer and easily stand up to the abuse!

That night I went through the box’s contents where I found all the necessary owner’s manuals, power throw lever, covers- both bikini style and Tenebraex, and stickers. I took some pictures of the box contents and then read through the owner's manual to familiarize myself with all the scope’s features as I played with them one by one.