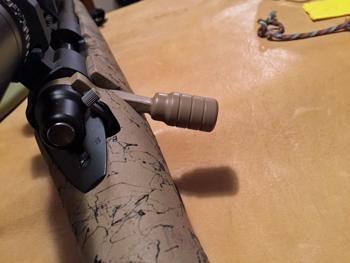 This past summer my custom Remington 700 Short Action in 6.5 Creedmoor and I burnt plenty of powder, expended many bullets, popping primers and smacking lotsa steel. I learned how to shoot long with confidence, and my Remington only let me down when I fed it badly built ammo.

The Remington forgave me when I screwed up, and became more familiar with each hundred rounds sent down range.

I changed scopes, raised the comb, raised the quality and consistency of reloading. Brass prep, powder measuring, neck tension, and personal gun handling all improved the repeatability of connecting the Point Of Impact with my Point Of Aim.

Calipers began showed the growth of brass after too many loadings. Not owning a brass trimmer, visiting a proud owner of such a device was considered. The challenge of overstaying your welcome while using someone else's tools is sometimes tough to overcome. So I tried something unique - I bought a Wilson Case Trimmer of my own.

Mad has one with all the accessories. A factory made stand, micrometer and a device to hold the case holder in place. It's really nice. It's dead nuts accurate. Set the micrometer, load and crank. Your desired case condition and length will be achieved.

Forced to minimize my financial outlay, I bought the basic model - no accessories. The rail with the adjustment screw, the crank and cutter, and a single case holder in 6.5 Creedmoor.

A three inch portable vise attached to my desk works very well to hold the Wilson Case Trimmer. Adjusting and setting the device for 1.910 inches, almost three hundred cases were processed. The mouths were squared and the cases uniformed in length.

Richard Franklin, who's built World Record accuracy achieving rifles, has a video on precision reloading. After watching Richard's video and incorporating some of his suggestions on building precision ammunition, I can tell you he's right.

Here's a truth that gives direction: The mouth of a cartridge case is the first launching platform of the bullet. If it doesn't leave the case mouth straight, it won't fly straight.

To keep the case mouths square after trimming them with my new Wilson tool - I used Richard Franklin's method of deburring without chamfering. The cases accept bullets for loading, feed without issue from the magazine. Yet no tool has touched the inside of the cases. If you want them square, square them up, leave them square.

After 25 years my Lee hand priming tool broke. For a few dollars more than a new Lee, a Lyman hand priming tool replaced the broken Lee. What a hammer! I think I'll be dead before that thing is destroyed through normal use.

The feel of the primer sliding into the pocket is just as sensitive as with the smaller scale Lee, but the tool is bigger and fits my hand better. The Lee is still a good tool. I just wanted something different.

In an earlier article I mentioned the trigger, and how it was a bit rough. My buddy X-ray replaced my trigger for me after we decided on one with enough useful features.

Trigger Tech originally designed their triggers for crossbows. After much consideration they now make triggers that fit the Remington 700 configuration. They also make one to fit the AR platform.

The sear on the Trigger Tech trigger doesn't operate like a conventional trigger. Instead of two flat surfaces sliding across each other, before one "falls" and the sear "breaks", Trigger Tech triggers have a rod between the surfaces, so a notch overcomes a radius, instead. The feel is completely different, and has zero creep.

X-ray and I put our rifles side by side. His had a reworked Remington trigger. Mine now had the Trigger Tech. We dry fired over and over using both hands simultaneously. The difference between the triggers was more than noticeable. It was stark.

The safeties on the new triggers are also notable. In our side by side test, the Remington felt like it was made of wood. The safety on the Trigger Tech felt like a well engineered, and machined, marvel. The Remington safety came off with an audible, click-like sound, but the Trigger Tech safety came off silently. That noise can be important to predator hunters calling game in close.

The adjustment to the weight of the trigger can be done without disassembly. Inserting the supplied Allen wrench inside the trigger guard, just adjust from 1.5 - 4 pounds. Each detent is equal to one ounce. So you can set it low for shooting targets in controlled settings, or tighten it up to a repeatable weight for hunting in uncertain field conditions.

X-ray and I had to shoot the Remington after trigger installation. I had it set pretty low, and blew one out of the fifteen shots fired because of trigger control issues. New and unfamiliar triggers take a little getting used to. I'm good now, though.

The horizontal dispersion of my test group that day was narrower than I have ever shot. X-ray was watching through his glass going - "Send another one! You got a good thing going there! Keep shooting!" So I did. I was liking that trigger.

Another addition I made wasn't a part of my rifle, but was used when hunting. It was a Primos Monopod Trigger Stick. Mad had it and decided he was going to do something different, so I got a bargain on the accessory.

Innovating, it was used for holding up the lower strands on many fences, so I could slide under on my belly, without scratching my bodacious buttocks on barbed wire.

Primos impressed me with their quality since I first saw Skinner's bipod. Setting the sticks with a single hand while keeping his rifle out of the snow and muck, was nice. Then he broke the bipod.

Just because you have 2.3 million miles on something doesn't mean it has to break right away. Skinner was somewhat put out. He said that he would see if Primos' warranty was real or worthless, and sent the busted bipod to the factory.

Skinner's Primos bipod must have been pregnant, because the next Wednesday he got a brand new Primos tripod in the mail. I was as impressed as he was with that kind of service. That's why, when Mad decided not to keep his monopod, I bought it from him.

On the trip home from buying the monopod, I called Skinner and asked how many times he thought I would have to send it to Primos, before it would turn into a Primos Jim Shockey standup tripod. He wasn't sure, so I used Cabelas points to get one quicker.

The tripod was put to good effect during this fall's deer hunting season. From the side of a very steep hill, I shot 266 yards across a valley to get my first deer of the season.

A couple days later a female coyote that must have been in the thicket right below my son and I, for a couple of hours, stepped out. She was steady in my crosshairs over the tripod, dying unaware. In cattle country you can say - The coyote passed away of natural causes.

On the last evening of the season, the Remington sent another 130 AR Berger hybrid into a big doe, exactly on my Point Of Aim. The Jim Shockey Primos tripod supported that action, too, as I sat leaning against a hay bale. The Primos worked as a sitting, and standing, shooting support, and as a walking stick for multiple creek crossings. Good stuff.

I found a great use for the Primos monopod too. Although I didn’t use it to hold up a rifle, or steady any optics, I used it to hold up the fences I was slithering under. It was just the right height to help keep my fat butt from getting snagged.

When deer hunting was over, X-ray said he had too much time on his hands and parts in his pile. John McLain, lathe operator extraordinaire, had made an extra custom bolt knob for X-ray, and I became the recipient of their combined art and efforts.

Delivering the Remington's bolt to X-ray on the Monday after deer hunting, and picking it up from his house the following Sunday evening, the transformation was complete!

X-ray ground off my old bolt knob, shaped the stub, welded the John McLain built knob on, Cerakoting it to match my stock. I have some favorite accessories on, and for, my Remington. That extended bolt knob, made and installed by the McLain/X-ray duo, ranks up there with the best looking, most-useful-in-the-field addition so far.

Another accessory I’ve learned to appreciate is good scope caps. The Vortex I have mounted on my Remington came with those cups connected with elastic straps. I zip tied them onto the scope body. That way you just had to slip them off and release them, and wouldn’t lose them.

For whatever reason, during deer hunting season I removed them altogether. They would bang and rattle against the side of the rifle – irritating me, not necessarily the hunted game. Then, I lost them because they weren’t connected. Yeah, a string between my mittens strung through my sleeves in the winter is a good idea too!

Vortex has/had a great set of ultra-cool flip-up scope caps. Now I have a set. Hunting coyotes at night is tough enough without closet dust, and fallen snow, on your scope lens. Vortex’s flip-ups can be set at various angles from 90 degrees, to flat against the scope body. Inside the back cap is a place for your comeup chart, too! So now I don’t have to cant the rifle, or look away anymore.


Les Voth learned to hunt whitetail deer and coyotes in his native Canada, and has hunted both as often as possible in eastern North Dakota since immigrating to the United States.
Reactions: corsair4360