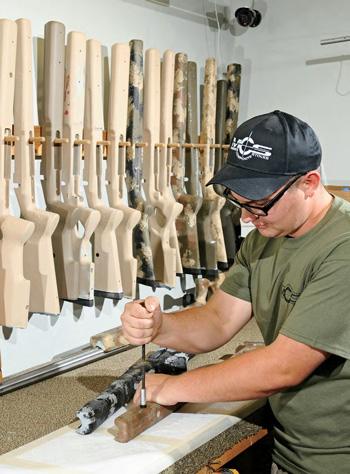 Have you ever heard the rumble of a Ford 427 side oiler on a loose exhaust? Its throaty, loping idle sounds as if it has a dead plug or two. Snap the throttle, though, and it instantly comes alive in a crescendo of intake and the remains of burnt fuel. Feared on the street, legendary on the track, it is the stuff dreams are made of. Thomas Manners not only had a 427 Siamese bore NASCAR engine, but it resided in a Shelby Cobra replica. Basically, he drove what most men have fantasized about, and it was every bit as good as you can imagine. He sold that FE-powered Cobra to finance a business he was even more interested in, building rifle stocks.

In order to be truly great at something, you need passion. It’s this love that allows some to go above and beyond the norm. For Thomas Manners, it’s building high-quality rifle stocks. While Manners has long been a competitive shooter, he hasn’t always been in the firearms industry. He actually made a name for himself in the popcorn trade. At one time he had 600 employees, and he did so well that he was paid to stay out of the industry after his company was purchased.

So how did he get into building rifle stocks? Good question. To find out, I visited him at his shop in Kansas City. On a beautiful September day I drove a couple hours east on I-70 and made my way to where his company is located. I arrived at the same time that Jason Morton of CZ-USA did, and we entered together to meet with Manners and his general manager, Matt Walker. Sitting in his office, Manners told me how he enjoyed competing in a variety of shooting disciplines including NRA High Power, F-Class, .50 caliber 1,000-yard Benchrest and Handgun Silhouette. He shot Dan Wesson revolvers in Silhouette and was good enough to be ranked in the top 10 in the country.


Fate reared its head, however, when he, Skip Talbot and some others approached McMillan about building a cutting-edge redesigned stock for them. They took the answer as a bit rude, and Manners decided to build a .50-caliber, 1,000-yard Benchrest stock himself. He not only succeeded in his endeavor, but soon he had other people requesting stocks. He began making stocks on the side at his home as a hobby. He did this for two years while working full-time in the popcorn industry. However, after his company was purchased, it was time to find work elsewhere. At about this time his hobby was starting to snowball and grow in size. He took on his first employee and began to expand. The MCS-T (Manners Composite Stock Tactical) was his first product, and to this day it remains one of the most popular stocks he sells.

He built stocks at his home for about five years. Eventually, he realized that he should try to make a go of it, so he spoke with his wife about turning his stock-making hobby into a full-fledged business. She agreed, but only if he didn’t borrow any money to do it. In order to take things to the next level, something was going to have to go. That something was his 427 Cobra replica. The car of his dreams paid for a mill and a compressor along with rent at a new shop for an entire year. Manners hit the ground running and hasn’t looked back.
Next page: Manners Composite Stocks Factory Tour >