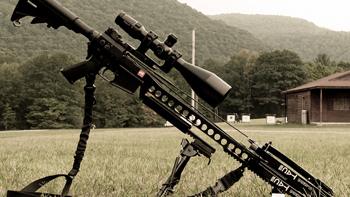 For some, long range hunting is an added dimension to a well-developed repertoire of field tradecraft and marksmanship. For others, long range hunting becomes a necessity to successfully harvest wild-game encountered in an open terrain environment. For me, long range hunting became a necessity while hunting the vast wilderness of the Appalachian Mountain Range for black bear. In locations where 'fair-chase' on public property is not defined by hunting over a feeder, or in a fenced confinement, being able to glass and shoot from mountaintop to mountaintop became a necessity. Success at long ranges could not be accomplished with a lever-action 'brush-gun' nor by using iron-sights. I learned early on that my equipment, skill set, and motivation needed to be on par with the challenges that the wilderness presented.

Season after season as my knowledge and experience grew, I discovered which type of rifle equipment yielded the best accuracy - there is nothing quite like a finely tuned bolt action rifle outfitted with a quality optic. But just as I mastered the skill, I relocate to an area where using a rifle to hunt big game is restricted to 'primitive' technology such as a muzzleloader, shotgun, or bow. I became forced to make a paradigm shift to another weapon system which is limited in speed, kinetic energy, and distance.

Seemingly counterintuitively, I re-channeled my newfound long range tradecraft into another aspect of hunting that I thoroughly enjoy, perhaps even more ... archery. In this article, I'll highlight my transition to long range archery hunting with the crossbow. I'll discuss (1) setting a proper mission objective, (2) selecting the proper equipment, (3) fine-tuning skill sets at the target range (4) applying field tradecraft in a real-world environment; illustrated by two successful long range harvests of mature whitetail bucks, and finally (5) use self-assessments and constructive criticism as tools to improve. Ultimately, my goal is to demonstrate that conceptual terminology such as "long range" and "bow" and "big-game" are not incompatible with one another, but when mastered correctly can redefine commonly held definitions of marksmanship and field-craft, and open-up an entirely new hunting experience for those willing to pursue it.


STEP 1: OBJECTIVES: Setting realistic and achievable goals are the first step toward an effective long range weapons system and successful harvest in the field. You'll need to ask yourself, "What is it exactly that I want to be able to do?"
For example, if your goal is simply to be able to shoot targets at the local range, then you'll need the optimal equipment for that setting. In this setting you may choose equipment without regard for length, weight or versatility. On the other hand, if your goal is to make a successful harvest in the field you may choose equipment that is lighter, shorter or less cumbersome, but potentially less accurate at long distances. If your goal is to be able to do both, you'll need to find the right balance of long range accuracy and practical application in the field. But a key point to this decision is knowing the limitations of your local range and the area in which you hunt. For example, if you choose equipment that is capable to shoot out to 100 yards or more, but yet your local archery range only offers target practice out to 50 yards, then you'll either need to find another range or limit your objectives and equipment to that distance.

Likewise, you'll need to evaluate the area in which you hunt. For example, if your hunting opportunities limit you to wooded areas that only allow for 30 yard engagements, then it would be wise to find the optimal equipment for that distance. On the other hand if you hunt near open ranges or fields that allow for longer engagements, then you'll want to select the right equipment to allow for the opportunities to make a successful harvest at longer distances, the key point being, choosing and utilizing equipment to accomplish your objectives.

STEP 2: SELECTING THE PROPER EQUIPMENT: When dealing with precision, accuracy, and capability there is simply no substitute for quality equipment. However, this choice is often accompanied by a higher price tag. For me, the investment is worth it. The archery season in the state where I hunt lasts for approximately three months, longer than any other season. Based on my experience, archery season also offers more opportunities at mature whitetails in their natural environment. Others may have a different perspective, but I found it hard to justify focusing all my time and resources in a high-end rifle when rifle season only lasts for a couple of days, as compared to a couple of months of archery season.


CROSSBOW: The weapon system I selected is the Precision Shooting Equipment (PSE) Tactical Assault Crossbow (TAC 15) crossbow. Built to military-grade specifications on the AR 15 platform, the PSE TAC 15 offers the speed and kinetic energy to project an arrow (bolt) out to 100 (+) yards with consistency and accuracy. The TAC 15 is outfitted with a series of Picatinny (MIL-STD 1913) rails to mount a variety of the needed accessories which makes the crossbow one of the most versatile on the market. For example, I utilize a Harris bi-pod on MIL-STD 1913 quick-release mount to ensure a solid rest from the prone position. Also, I use a MIL-STD 1913 quick-release scope mount and flip-up backup iron sights for the added benefit of rapidly removing the scope for close-quarters engagements or in the event the scope becomes fogged or fails in the field. A forward positioned MIL-STD 1913 rail on the TAC 15 allows me to mount a quick-release Surefire E2D LED high-output Defender flashlight for encountering (or blinding) dangerous game in the dark. Or on the same forward positioned MIL-STD rail, if the flashlight is not mounted, I often attach a DRIFT Innovation point-of-view (POV) High-Definition camera to capture the shot on film. To offset the weight of the fully outfitted crossbow, during long hikes I use a tactical quick-detach two-point bungee sling, which allows the TAC 15 to hang in the ready position at my side while traversing across the landscape. Finally, the TAC 15 upper assembly on the AR 15 (collapsible stock) lower assembly allows me break the crossbow down quickly to clean and service, or to store in smaller spaces.