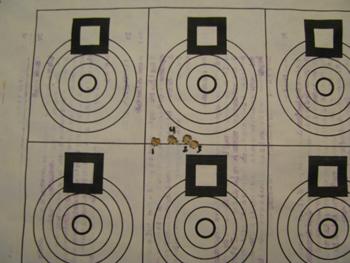 You just got your new rig home and are ready to get it shooting its best. But what is a way to get it dialed in without spending a fortune, burning up the barrel and taking multiple trips to the range?

This was a problem I faced years ago when I made the plunge into LR hunting. The most common method was to load up a bunch of ammo while varying one thing (usually powder in 1/2gr increments), shooting a few 5rds groups and 'working up'. When the best load was found, some other changes might be made like powder, bullet, primer, seating depth, neck tension.

I did this for a few rifles and burnt through large quantities of ammo and barrel life. Started looking for another way.

What I found was the Audette Ladder test. You fire 1 rd at each powder increment at longish distance and look for where the shots cluster. The idea is that as you approach a node, the barrel will be less sensitive to powder change and all the bullets will land in a cluster.

It wasn't something that I thought would be too reliable, as I tend to shoot in the wind and that can move things around enough to cloud the results. Also, my present method showed that some rifles' sweet spot is very narrow- narrower then the average powder step used by many shooters.

My solution was to combine the strengths from each method to find a way to get my rifles dialed in while shooting the least number of shots. Also, the method eliminated the need to vary seating depths which can be problematic in a mag fed rifle. Varying neck tension was also eliminated as the ammo had to hold the bullet well enough for field usage.

I keep these two parameters constant in my testing. I use the Lee collet neck die for my neck sizing and this provides around 2 to 3 thou neck tension.

Before we discuss the process, you need to take these steps otherwise your results will not be dependable.

-The rifle should be properly bedded. Even the alum chassis stocks, all nuts and bolts tightened down and the trigger set for the lightest pull that you want to use.

-All test should be done at 200yds. You will not see the variations in the testing at 100yds. 300yds is also good but wind can start to play a larger role then desired (calm air is always the best, but not always possible). Use as many wind flags as possible - a stick with 2ft of flagging tape is all you need.

-Use fireformed brass that has been prepped as well as possible. You will be varying your loads in very small increments and unformed brass can mask these effects. Plus new brass is not always straight which is resolved with fireforming. I use a light charge of pistol or shotgun powder behind some cream of wheat or cornmeal to form the brass. Size the brass the way it will be used in the field.

-Use accurate bullets like Bergers/Hornady Amax/Sierra MK's, temp stable powders like Hodgdon Extreme, match primers. Proven components for the chambering you are using.

-A very accurate scale. This is really critical to your success. For a large magnum, holding to ± 0.1gr is ideal. For a 308 and 223 sized case, less is better. Yes, I have seen effects on groups and stringing with very small increments in powder.

-Ammo with little to no runout. In my previous article on loading for LR shooting, I covered tips on the loading process to maximize your accuracy. Runout, or bullet wobble, really hurts your accuracy potential and VLD bullets are very sensitive to this. Less is always better.

- Solid rest/bench and stock set up. We are testing the load, not the ability of the rifle or rifleman to shoot. Anything to eliminate shooting error should be used.

- Quality optics that let you see at least 1/8" at 200yds (the smaller the better). That is pretty much a given in the LR game as we tend to use high mag scopes with better optics. The article on choosing and testing your scope for LR shooting can help you with your choice and setup.

- And most importantly - shoot with as little wind as possible and use flags. This is worth repeating....

Load Tuning Technique
The OAL length of the ammo is determined by the mag and not varied. I use the Lee collet neck die for neck sizing and this provide 2 to 3 thou of neck tension which I find ideal.

In my process, I load up 2 rds at each powder increment and increase my powder charge in small steps (0.5gr in a magnum, 0.3gr in a standard case, 0.2gr in a 223 sized case), firing them at 200yds and seeing how the groups form. I will use a separate target for each powder charge.

When working up a load in small increments, groups will start large, then shrink at low/moderate pressure, expand again, then back down with velocities at desired levels, expanding quickly with obvious pressure signs.

Each time the groups shrink, I call this a node. I have yet to shoot a barrel that didn't have two, and a few have three, but that third one is definitely a hot load and should be used with care (watch ambient temp change too).

If the goal is for the lowest ES/SD and vertical stringing, I will gravitate to the second node. This load is definitely warm. You might see slight primer flattening but there will be no issue with extraction or case bulging. Primer pockets stay tight after several loads. The usually stuff. A nice side benefit is powder fouling, using modern extruded powders like Hodgdon extreme, will be almost non existent at this pressure level.

So let's say my 2 shot ladder test showed a second node around 44.5gr to 44.8gr (let's use a 308 type case as an example), some pretty obvious pressure signs at 45.1gr with groups starting to open up, then 45.4gr where groups definitely opening up maybe even being vertical and the fired case showing strong pressures signs, even some bolt lift stiffness.

45.4gr becomes the max loading for this rifle and components.

I go back to 44.3gr then work up in 0.2gr increments. I will shoot 3rds in a group and 2 groups just to make sure I don't have a shooter induced error wasting a test level.

The groups show that 44.3gr and 44.5gr again are not bad but there is some vertical and not as tight as desired. At 44.7gr things really start to snug up. 44.9gr is also really good. At 45.1gr, groups open up as expected.

We started by doing a 2 shot ladder test and fired say 20rds to go from starting load to max pressure. Found a couple of interesting nodes on the way.

Retest uses up another 30rds and have now narrowed my testing to the range of the second accuracy node (44.7 to 44.9gr).

I will retest 44.6 to 44.9gr in 0.1gr increments to find the best load. Note that I don't go past 44.9gr because I know that 45.1gr is out of the sweet spot with elevated pressures. 45.0gr is simply too close and will prove too sensitive to changes in ambient conditions.

The group size may not change much but the orientation of the groups will. Keep an eye on how the group orientates. You will see 'clocking' where the direction of the group shows more horizontal or vertical dispersion as you adjust the powder charge in 0.1gr increments. Looks like the groups are rotating or clocking.

The pic above illustrates what I mean. Group size is similar but one load is flat and the other has alot of vertical - powder amount varied by 0.1gr in my 223. The results are repeatable.

Voila, you find 44.8gr to be the best compromise with both accuracy and lack of vertical. The groups look like a football on its side.

If all goes well, your groups should be flat like the above pic (the width of the group is due to wind), not like the pic below. Same group size but LR accuracy of the load in below pic will be horrid. Groups shot at 200yds.

At this point, you have shot less then 100rds and have a great load. Some would argue that the number of groups are not statistically adequate. For them, they can now shoot as many 5 or whatever sized groups they need to satisfy their concerns.

For me, I would retest again with a couple more groups at LR to confirm the lack of vertical and accuracy then practice and have some fun. You should find the load to be very consistent as far as elevation goes (reliable and repeatable drop table) with only the need to judge the wind limiting hits on target.

Pretty simple process really and has worked on all the rifles I have worked on over the last 5yrs. Saves a whole bunch of shooting. If you note, I don't play with seating depths and find varying the powder amounts in very small increments to do the same thing. Just make sure your scale is up to the task.

Using proven components, this process gets me dialed in quickly. Hope it works for you.


Jerry Teo shoots regularly out to one mile and also competes in F class. His current cartridges are 223, 6.5 Mystic, 7 Mystic, 308, 300RUM and 338 Mystic. He enjoys experimenting with gear and wildcatting in order to increase accuracy performance and to debunk accuracy myths.
Reactions: durrelltn and Brian Ranson