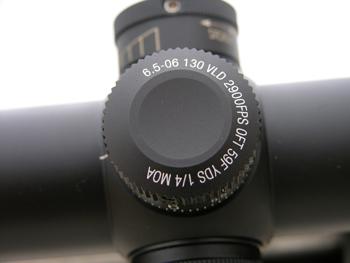 Each year I have the pleasure to test and evaluate a lot of different rifles and scopes. The scope industry is changing every day and not always for the best. These two particular scopes caught my eye. They are not exactly alike but they do fill a need in the long range shooting/hunting world. Not everyone wants to shoot a deer at 1500 yards or partake in F Class matches. Neither is everyone a reloader. There are a lot of folks that use the same rifle and factory ammunition each year or if they reload, they use their own pet load. Fewer shooters want to have to do all the calculations and adjustments needed to make extremely long shots. They just want a good scope that they can use if or when they have a chance to shoot past their comfort zone for the old 3x9 scope.

The Quigley Ford and Steyr cooling off.


First let me say that anyone wanting to shoot accurately over 250 yards should have a laser range finder. Their price has come down considerably, they are light weight and easy to operate. I personally use one of Leupold’s. While in the deer stand, I often guess the range of a certain tree and then check my estimation with my range finder. I know there are a lot of built in range determination gadgets in some scopes but a laser range finder is far more precise.


I saw the advertisements and videos for the Quigley Ford scope on this site and they got my curiosity up. I called the company and talked to Randy Ford, the owner. First thing I asked was how he got the name “Quigley Ford”. “Quigley” came from the famous long range shooter from the movie “Quigley Down Under”, which happens to be one my all time favorite movies also. You can guess how it got the name “Ford”. It did not take long to realize Randy was a true hunter, fisherman as well as being a business man. He owns Walker Downriggers also. Since Quigley Ford is only a few years old I checked on the reputation of Walker Downriggers and it is quite good with reports of a good customer service department. The company is located in Canada, with the Quigley Ford customer service based in the USA.

A computer drawing of the reticle of my Quigley Ford scope for a .243.


About now you are probably asking, where are the scopes and optics made? First the glass is from Germany. Other parts come from around the world, but only the tube comes from China. It is all assembled in Canada. The scopes have fully multi-coated lenses and are gas filled. The reticle is etched into the glass. They have a quick and easy eye focus ring but no parallax adjustment. In general they are assembled like any other quality scope. The scope I chose was their highest magnification model, the 4-16x50mm. When I first picked it up, I had a pretty good idea that I was holding a quality scope. The glass was exceptionally clear at all powers and gathered low light extremely well.

Recently I had purchased a used Steyr SBS in .243. The previous owner said the rifle loved Federal 100gr. ammunition. So I bought a few boxes and sighted the rifle in at 200 yards. This rifle was like my other Steyrs, it shot less than one inch groups at 100 yards. I skipped the usual box testing and other tests I perform on scopes and headed out to the long range facility. First I had to qualify the rifle to shoot long range. This consists of shooting at a 250 yard small pop up silhouette and then at a steel plate at 500 yards under the watchful eye of the range master. Since I had no hash mark for 250 yards I just held on the head. I did not miss any of my three shots. Next was the 500 yard plate and again one, two, three and I was done. I found it was easy to pick the correct cross hair because each 100 yards is marked and labeled out to 800 yards and 50 yard marks starting at 550 yards. For curiosity I shot three rounds at the 750 yard gong and not a miss.

I did find some slight parallax at the 750 yard target but not enough to bother me. This rifle, scope and ammunition combination would be and will be deadly. Remember the fewer parts inside a scope that you have to adjust, the less likely of having a problem. Randy does not know yet but the scope is staying in Texas.

Next up was the Leupold VX-3 CDS. The Leupold name and customer service speaks for itself, so I will not go in too much detail about the scope. I ordered it with a custom dial set for a 6.5mm 130gr. Berger VLD at 2900FPS. I mounted the scope on an old custom built 6.5-06 rifle, Remington action with a Hart barrel.

The Leupold with CDS, mounted and ready to go.


Recently I replaced the twenty-five year old custom stock with a Hogue over molded stock with the full length aluminum bedding. I have to admit this stock helped me shrink my groups a little and made it far more comfortable to shoot. The rifle loved the 130gr. Berger VLD/hunting bullet and I used a load that pushed the bullet around 2927FPS. This load may not max out the capabilities of this round but the rifle will shoot clover leafs with it at 100 yards. The scope was easy to sight in at 100 yards, I then just loosened three tiny screws and set the turret to zero, then tightened down the screws. The same procedure is used to replace the turret. This model scope also has range estimation ability, which I did not try out.

The markings on my CDS turret.


At the range I went through the same procedure to qualify the rifle. All went well at 250 yards but I missed one shot by maybe an inch at the 500 yard gong, which was probably my error. The fourth shot was right on the mark. The CDS dial, with my ballistics, only goes one revolution and stops at 700 yards, so I did not want to try the 750 yard target. This particular model does have the side focus which I have come to really like on a scope. This scope is also a keeper.

The shooters view of the CDS turret.


The Quigley Ford scopes come with pre-etched reticles for the factory ballistics of many of the modern hunting cartridges, slugs and even black powder. As an option, if you want to use another load, you can have a scope with a custom reticle made for your ballistics. The Quigley Ford scopes are designed for the hunter that uses the same rifle and ammunition all the time. It is very good glass and the ranges are real easy and quick to see even in low light. There is no need to lift your head to make adjustments; just pick out your range and shoot.

A few things I did not like are that the scope is for that particular ammunition only, even though if you changed the ballistics some, you could easily figure out your holds. There was no parallax adjustment which I feel is needed on a long range or even mid-range scope. Also I would like to see a slightly higher magnification model. But I have to keep in mind that this is a hunting scope, not a target scope. It fills the particular needs of a large portion of hunters. Only time will tell about customer service since I could not find any comments good or bad. It is priced about the same as the Leupold and I would not hesitate to pay that for the Quigley Ford scope.

The Leupold did well during my shooting test. I would have preferred a scope with more than one revolution in elevation. The elevation dial does not have a cover and does not lock into place. I could just imagine taking the rifle out of a case and not noticing the turret had turned in the process. The dial markings are hard to read in low light situations. For example if I was sitting in a pop up blind, the dial may be hard to read if not impossible. The other problem with this dial or any dial system is you have to take your eye off the target to make adjustments. It is however nice that you can easily change the turret for another rifle, load or ammunition. Leupold Custom Shop also makes an etched reticle scope for your ammunition’s ballistics that has dots on the vertical crosshair at 100 yard intervals.

Even though these two scopes are not exactly alike, they serve the same basic purpose. Both rifle, scope and ammunition combinations showed good accuracy at the distances they were shot. It was pleasant to shoot and evaluate these good quality scopes. I am sure they will both see some time in the field this deer season.