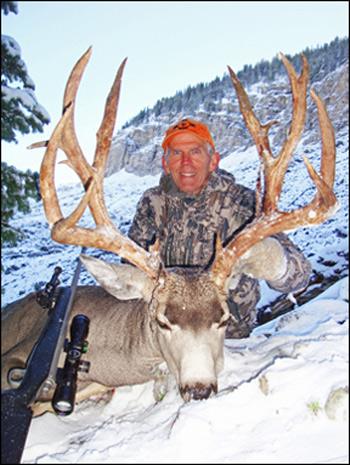 Three years ago I booked an LRH Group Deer Hunt with Robb Wiley of Non-Typical Outfitters for 2015. Three years is a long time to wait when you are relentlessly teased over the years with pictures of other big bucks taken by his clients in 2012, 2013 and 2014. Finally it was September of 2015.

I had planned to hunt with my own rifle in the very popular new 28 Nosler cartridge but made a last minute change. In mid-summer the first, prototype lightweight LRR Mountain Rifle was shipped to my customer - Richard S - just in time for his Alaskan Dall Sheep hunt.

It was chambered in 6.5x284 and I shot it using my own personal load recipe before I shipped it. Using a 10 power NF NXS scope I put its first-ever three shots into ⅜ inches at 100 yards. The second-ever three shots -- at 600 yards with a little wind-- went into 3 inches vertical by 4 inches horizontal.

Not bad for a rifle weighing only 8 pounds with opticsand using a ten power scope and a brand new barrel before break-in.

This got me to thinking how nice it would be on a rigorous mountain hunt, to shave a couple pounds off my own normally chosen personal rifle/optics package.

As a result the just-in-time LRR Mountain Rifle - #2 was delivered right to my tent in the Wyoming wilderness with a Huskemaw 4-16x42 scope. This was just days before my deer hunt was to begin and on the last day of my archery elk hunt - but that story is for another day.

My new Mountain Rifle is chambered in 6.5 SAUM 4s. With this cartridge I have shot about 500 hundred rounds previously in a different LRR rifle, including during the LRH-NTO Shooting Classes last August. The Mountain Rifle sports a super-light Pierce titanium action and a lightened bolt handle. It utilizes a lighter contour barrel which was fluted and it is 24 inches long vs 26 on the first rifle. Still I hoped the same cartridge load would work well enough for this new rifle since I had no time to work up a new load.

I quickly confirmed my load confidence by shooting half inch or better 3 shot groups during my initial 100 yard sight-in up in a mountain meadow. Then I moved over on the mountain side where we have a steel target course set up for trajectory validation. I shot a single round at 500 yards and then went right out to 700 for my final testing.

I drove to deer camp in another area down the highway to begin the deer hunt.. Wouldn't you know it. The runny nose during the elk hunt was not allergies but rather a nasty cold coming on hard and fast. On day one I started taking cold meds to control loud coughing and sinus congestion. Most of day one was rainy. I was undecided on how tough I could be that day given the discouraging rain and my deteriorating condition.

Each of the LRH Group Hunters went out that morning pursuing a specific deer that had been pre-scouted by the NTO team. Each of the seven hunters' quarries was rough-scored to be in the 190 or higher range. We actually saw mine at some distance in the mid-afternoon of day one but never got on to him that day.

The next two days were forecast to be rainy most of the day so I stayed in camp with a couple other guys. Sinus congestion and a bad headache took my fun in camp away. No deer were killed on the first three days by the group.

But on the night of day three, snow in the upper regions with clearing skies were both expected. The sudden improving conditions raised everyone's expectations for their own hunts that next day.

So my guide Robb Wiley and I made our way on horseback up a different mountain in the dark on day four. As dawn streaked across the clear blue sky we could see that low clouds filled the valleys we had just climbed above in the dark. No wonder my outer clothes felt damp. A few inches of fresh white snow covered the mountain tops. We quickly reached our final summit on foot and peeked down into a couple adjoining basins blanketed with snow. Over the next hour we saw numerous does and mid-sized bucks -- several of which I would have gladly shot on day one of a DIY hunt.

Around 8:30 am Robb spotted "Len's Buck” -- the one we were after on day one. He indicated it was a shooter. Not wanting to add undue pressure, he didn't actually tell me which buck it was until after I shot. As I picked it up in my rifle scope, it was obvious he was about to bolt into the trees just 10 yards away.

At 410 yards I took a quick prone position with no time for rear bag. I could easily spot my hit with the scope set at 8 power and I watched it fall and start sliding about 30 yards down a steep ridge. As it fell it created a distinct bloodline in the snow until it finally came to a to a stop just out of sight behind some trees.

We gave each other cautious high fives. It took 10 minutes to reach the deer down one steep slope and up another one. Meanwhile Robb had told me it was indeed "Len's deer'. Only when we could finally see the still warm carcass through the trees were we positive he was still there.

While no one put a tape to the antlers, the guides guessed the score at about 195. My taxidermist later scored it as 201 gross. My best ever by far. I am just thrilled with it. Lots of mass. A gorgeous main frame typical with loads of character added by numerous stickers. And the backstraps we ate last night were exquisite.

More info on the overall group hunt success later -- but it was very good including a 32 inch monster taken by Larry Lombard and an even wider 38 incher taken by the "other Len in camp" -- Len Guldman.
Reactions: alcesgigas

I'm wondering what bullet you used on the hunt. Do you recall the details? What about the muzzle velocity?

rlspahn said:
I'm wondering what bullet you used on the hunt. Do you recall the details? What about the muzzle velocity?
Click to expand...