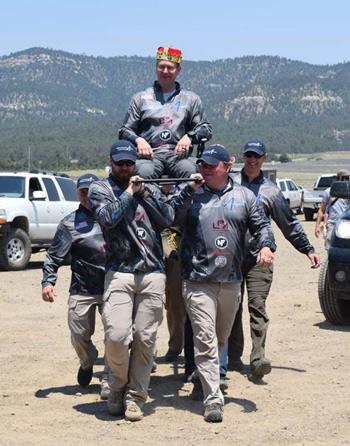 For the qualification rounds, each shooter was shooting at 3 targets: 1543yds, 1722yds, 1888yds, and 1953yds. The shooters had 5 shots at the first target and 3 at the following 3. If any of the targets are not hit with the allotted amount of shots, the shooter did not advance to the next target. The shooters had a total time of 9 minutes.

Day 3 was finals for the top 10 shooters from the prior 2 days. On this day, the targets were at up at 2667yds, 3028yds, and 3368yds. All targets on this day were 5 shots each with a time limit of 10 minutes’ total. The shooter had to hit the target in order to advance to the next target, but there was not a limit to the number rounds that could be fired at each target.

On day 1, conditions were not ideal, but workable. The morning of day 2 was less than ideal with high wind speeds constantly changing directions. After the first 3 shooters, the winds died down and conditions were acceptable.

Unfortunately, our team did not qualify for finals. But we are extremely happy to say that 6 out of the top 10 competitors were using our bullets. In addition, 3 out of the top 10 qualifiers reached the first target at 2667yds during finals. All three of these people were using Cutting Edge Bullets.

We would like to recognize those in the top 10 using our bullets:

We just want to say thank you for using our bullets and congratulations on a job well done. We hope to continue to support all of you in all of your ELR endeavors!

King of 2 Miles 2017- Derek Rodgers of Team Applied Ballistics
Derek Rodgers of team Applied Ballistics is the official 2017 King of 2 Miles with Ronnie Wright of team Barrettin second. Both teams were using Cutting Edge Bullets. Derek blew everyone away during the qualification round when he became the first person ever to hit the 2 mile target in the history of the KO2M matches.

The tradition performed with every winner of the KO2M

A brief interview with Derek Rodgers

What do you believe contributed to your success at this match?
This match was truly a team effort from the entire Applied Ballistics Team. Emil Praslick and Paul Phillips are world class wind readers and spotters. They have the ability to make decisive decisions and trust that I (as the shooter) will put a bullet on target every time a command is given. We posses a dynamic team background with a lot of history and experience under our belt. Our positive team synergy is hard to find. The addition of vital tools played a huge role in our success. A few of the tools we used were the AB Kestrel and Garmin Foretrex 701 AB Elite to give absolutely crucial and accurate ballistic solutions. The new McMillan ELR Beast stock was stable and the NF ATACR scope is robust and clear. The Bartlien barrel used was top notch! However, one of the most important pieces of the ELR puzzle and the only thing that separates the target is -- the bullet. We chose Cutting Edge bullets due to their high level of precision. These bullets proved to be invaluable in connecting every piece of steel at the Ko2M competition. The CE 400gr Lazer Max bullet was selected and was tremendously accurate. This bullet transitioned into a sub-sonic velocity without any loss of precision at ELR distances. Our success would not be possible if the projectile did not fly correctly for 7+ seconds of flight time. CE has outstanding designs and several quality choices to choose from.

How many hours would you say you practiced for this match?
It is hard to calculate practice time in hours. ELR is a program that we work on every chance we get -- day and night for months prior to the event. We have an extremely strong background of team shooting and long range shooting. A lot of time has been invested on and off the range, but does not stop there. The combined range time from other disciplines really helped me to be successful in transitioning from long range to ELR. It really is a compilation of 10 years of trials and tribulations. Some would say, "the devil is in the details". Our team try's very hard to not overlook any small detail. Practice and training is always scrutinized for improvements. Our Applied Ballistics team has a love and passion that goes beyond measurable amounts of time. We were fortunate to get together for 2 days a month prior to the Ko2M event to review our program and practice as a team. Bryan Litz had a plan, and we discovered as a team we had flaws in our program. Each one of us contributed from years of experience on improving our technique until we had a winning solution.

Why did you choose the cartridge you used?
When I was asked to join the AB Team, I needed to get an ELR rifle built in a short period of time. I was under a very tight time schedule to get the project complete. In an effort to eliminate variables, I decided to keep things standard and as simple as possible. I chose the 375 CheyTac for the ease of getting components. The larger rifles are more difficult to get components quickly and I felt like the 375CT had enough attributes to be competitive at ELR distances.


Derek's Bio
Derek Rodgers is a multi-time F-Class National Champion, 1000 yard record holder, and one of the most decorated long range shooters. Rodgers discovered F-Class in 2007 and has been part of the award winning National Championship Team Sinclair. He is also a member of the current Team USA FTR squad. Rodgers participated with the 2013 USA FTR team that took home the gold medal at the World Championships held in Raton, NM. In 2010, Rodgers won the F-Open National Championship in Sacramento, CA. Additionally he also won the 2013 FTR Nationals in Raton, NM. This makes him the only person to win both F-Class divisions at a national level event. He also has many other victories from various matches, including the 2013 Sinclair East Coast Nationals in Butner, NC and both 2015 & 2016 Berger Southwest Nationals (SWBN) held in Phoenix, AZ. Rodgers also sets the bar high by holding the present 1000 yard, 20 shot, Berger Southwest Nationals Record with a score of 200-10x. Respectfully, he has 3 of the last 4 Individual NRA 1000 yard, 20 shot records with outstanding scores of 200-11x, 200-12x, and the current record of 200-14x. Derek Rodgers most recent win was the 2017 King of 2 Miles (Ko2M) match held in Raton, NM. He concluded the match by making contact on every target. Rodgers was the first person in Ko2M history to make an impact at the 2 mile target! When Rodgers is not on the firing line, he enjoys spending time outdoors with his supporting wife, two daughters, family and friends.

Ronnie with the rest of the Barrett team

All of us over here at CEB want to congratulate Derek Rodgers and the Applied Ballistics team as well as Ronnie Wright and the Barrett team. Thank you for believing in our bullets and allowing us to be one of the many factors in your success.