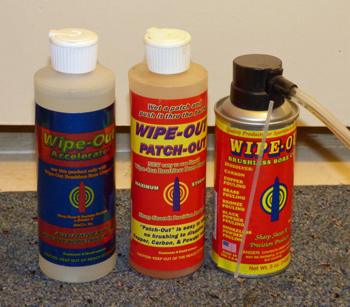 I’ve been cleaning rifles for a long time and it wasn’t until recently that I got one clean. It was quite by accident that a gunsmith friend told to me to try Wipe-Out cleaner. My friend specializes in long range, accurate rifles and his work does not leave his shop until he is satisfied with the accuracy. So when he makes a recommendation I tend to listen. Although his advice is always good I did not act, as I still had plenty of my regular bore cleaner. Then another friend who has a reputation for winning groundhog matches gave me the same advice, “The stuff works.” That bit of information was also stored somewhere in the grottos of my memory. Finally, some months later another top-notch shooter told me to give Wipe-Out a try. That was the straw that broke the camel’s back. I decided there must be something to this bore cleaner and contacted Terry Paul at SharpShoot-R Precision Products in Paola, Kansas.

As soon as he was on the phone I popped the question; “Is it really true that using Wipe-Out will actually leave my patch white?” His immediate response was, “Angel white.” When that quick, very confident reply hit me I could not help but grin. Still, I was a little skeptical, after all, “angel white” is a color I have never seen when cleaning a rifle.

Then he challenged me, “Let me send you some samples, I’ll send a can each of Wipe-Out and Patch-Out, plus a few other items. Wipe-Out is applied by spraying into the bore and has a special applicator tip to do the job. You will probably be more interested in the Patch-Out since it’s used like a typical bore cleaner. Whichever one you decide to use, do our ‘proof test’. I think you will be happy with the result. If you have a barrel that is heavily fouled with copper, you always have the option to use some Accelerator. This product may be used in conjunction with either Wipe-Out or Patch-Out. Just let me know how Patch-Out works for you.”

When the package arrived I could not wait to do the SharpShoot-R “Proof Test”, a test that determines if a bore is clean. A rifle that had seen quite a bit of service over the last year
was retrieved from the safe. This rifle had been cleaned using my standard method: five to ten patches of my regular cleaner through the bore. The final patch still had a slight tint of gray, which I thought was normal. Using Patch-Out, a wet patch was run through the bore, then the rifle set aside for ten minutes. According to SharpShoot-R’s website, if the patch comes out a deep navy blue color there is copper in the bore. If it comes out brown that’s carbon. Powder fouling will always be gray or black, and molybdenum will show up as long black stripes from the bottom of the grooves.

In this case the patch came out slightly gray, not much gray, about the color of a patch that I would have considered clean. But according to the “proof test” that gray tint indicated some powder fouling was still in the bore. Then a second patch soaked with Patch-Out was pushed through the bore and left overnight. The next day I ran a clean patch through the bore and it came out gray. One more patch and it came out white. The two applications had removed the powder residue that the other cleaner had left. I was flabbergasted… and a little excited. I don’t remember ever getting a really white patch after cleaning a barrel.
Next page: Is Your Cleaning Patch Angel White? >
Reactions: JRandolph45