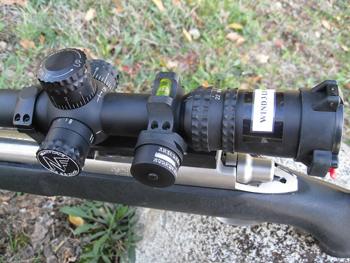 The simple textbook answer is that due to the canting of the weapon, the round will impact low and to the side that the weapon is canting. The more the cant and distance the round has to travel the more extreme the effect on the round will be. What causes this is the mechanics of the scope. The scope is set up to be used as level as possible. As you look at the scope, the elevation and wind adjustment turrets are set at a 90-degree angle apart. Now, if we introduce a less than level platform for the rifle, then the simple mechanics of the scope are going to be off. Thus, the round that you intended to hit the target at your point of aim will not quite be on target. The more distant the target and the more extreme the cant of the weapon, the more extreme the impact will be to the side of the cant and low.

Just imagine that you are shooting a .308 and your MOA adjustment on the scope for elevation is 12. More often than not, this is elevation dope for 500 yards. Lets say that you have a bit of wind deflection to contend with, so you have dialed on 2 MOA to the right. You're ready to take the shot, but you have canted the weapon without picking it up. In fact, the weapon is canted about 10 to 15 degrees to the left. Without getting out a slide rule and taking the measurements I can’t tell you just exactly how far the round will be off, but it will be out of the coveted MOA or less area that we intended to hit.

While this is true, one thing is missing from the equation… the human element. Canting of the weapon system while firing takes on many effects of improper placement of the bullet. Not only will the bullet not impact the intended target, but even before the trigger is engaged, the process of the round not hitting the target has begun.


If the weapon is not lined up correctly, then it is fair to say that your body is not in the proper position either. This may have been the cause of the cant to begin with. If your body is not lined up correctly, then it is safe to say that there is improper placement or inconsistent placement of your trigger finger on the trigger itself. Not only the trigger finger, but also all points of contact to the weapon. Not only your body but also shooting rests (if you are using them) or contact points of the sling if you are employing one. Once the trigger is pulled, and the internal ballistics begins to take place, the rifle is going to act according to the foundation that you the shooter have prepared for it.

Anti-cant devices (ACD or scope levels) and Angle Cosine Indicators (ACI) can be purchased in the LRH Gear Shop
Click to expand...

The rifle is going to recoil. The best we can hope to do is control how the rifle reacts once the recoil process has begun. Remember, as riflemen we are always compensating for one constant element: gravity! If the weapon is canted we have lost positive control of it, and the angle of jump that the rifle takes is less than desirable. The weight of the optics and the way that the weapon is canted will have a direct effect on what happens to the round as it leaves the barrel, due to the angle of jump and gravity. Not to mention the mechanics of the scope.

Like most everything else in this world, the angle of jump is going to take the path of least resistance. Ideally, the weapon, once fired, should come back into the shooter's shoulder and slightly up off the target, and then settle back on target once the shot is over. That is if the shooter employs proper follow through. When done properly, the shooter should be able to see the impact of his round on the target. The rifle being canted will not only throw the shot off course due to the way the optics are engineered, but also because the angle of jump has now come into play and affected the external ballistics of the round due to the cant of the entire weapon system and your body position. This will directly affect your ability to see the instant the round impacts the target (once again assuming that proper follow through was used) due to the weapon's angle of jump.

Once the bullet has impacted, and if you don’t have someone to spot the rounds for you, the round is now lost and your confidence in not only the weapon system but also your ability to shoot accurately is diminishing rapidly. This leads to the more inexperienced shooter (and some experienced shooters too) to second-guess what they are doing. If the shooter can see any results of an impact at all (post impact markings) they generally adjust the dope on the weapon. If that is done and the shooter now takes up a proper position without cant, the bullet will not impact where the shooter thinks it should be.

Now we are engaged in what is commonly known as chasing the bull. Many improper factors have been evident but not picked up by the shooter. This in turn causes a chain reaction of events that all lead to loss of confidence in all aspects of the weapon and the shooter's ability. Slow down and analyze what may be happening before you start to chase the bull.

I know, I know… Of course it could not have been the shooter, it has to be the weapon that is not performing like it should due to some mechanical error. Of course this is the first time that we have experienced this type of error but it can’t be ME! As in many cases, it is a direct result of the dope behind the weapon, not the dope on the weapon.

Those are some of the more basic things that most often go wrong due to the weapon being canted. The other things that contribute to weapon's canting can also be attributed to improper fundamentals of shooting.

As aforementioned, the weapon being canted can be the cause of and chain reaction of other improper marksmanship skills that will directly affect the shot. If the shooter is observing the seven fundamentals common to all shooting positions, then that shooter will have a leg up in the game right off the bat. Not just for battling weapons' cant but other marksmanship issues as well.

There are some tools out there to aid the shooter in not canting the weapon. For example, swiveling bipods, leveling devices and others. However, these devices are only as good as they have been attached to the weapon system. So be sure that the shooting aid is properly attached!!

Even with the aid of a leveling device on the weapon, it is not always checked just before a shot due to the excitement of the hunt (a.k.a. BUCK FEVER) or just plain forgetfulness.

The best way to combat canting the weapon is proper placement of a level on the weapon system. Once that has been done you are now ready to practice. The nice thing about practicing to overcome canting is that you don’t have to go to the range and fire. Set up your weapon safely. Did I mention safely? Once you have set up your weapon safely and ensure that you don’t have any rounds in or around it, you can begin training to get the weapon set up level every time you deploy it.

Here is the process. While aiming in and once you are satisfied you’re on target, slowly change your focus from your optics to your leveling device, back to the optics, (continue this process until satisfied) and adjust accordingly. If you’re in the bubble then you’re in the ballgame. Continue the process many times. In fact, you may want to practice this a few times a week a couple of months out before you go on your next hunting adventure.

Earlier I mentioned consistency. Consistency is accuracy in the game of long range shooting. You see, shooting is much like a house. One of the most important things in building a house is a good square foundation. Once that foundation is set, square and solid, the rest of the process comes together more rapidly and accurately. Accuracy is the key in both the foundation of a house as well as the foundation for a solid shooting platform.

Having said that, I know that you as a shooter in the field are not always able to have the most stable of positions when having to get a snap shot off on an animal due to the terrain or a chance contact. However, practicing the fundamentals of marksmanship in a controlled environment will enable the shooter to adapt more rapidly to a more undesired shooting position. Once the training is in place and the shooter has mastered the seven fundamentals of marksmanship, that shooter can adjust his shooting platform to the environment from which the shot has to be taken.

Take a hard look at past experiences in the field and what positions you have had to adopt to make the shot. Unfortunately, the field is never as level as the range or the floor of our living room where we may practice. Try and adopt as many positions as you can think of while practicing. The consistency of training your body to do the same thing over and over will enable you as a shooter to become more accurate while employing a level weapon system. All this training to maintain good fundamentals will pay big dividends in terms of future success.

Loadbase 2.0 ballistic software , my bullet will be off at 700 yards by 12 inches to one side and an insignificant amount low.
Click to expand...

Carl currently lives in Northeast Washington with his wife and sons. Carl was raised in the big game hunting industry in the Blue Mountains of Southeastern WA. Carl joined the USMC and was qualified in several MOS’s as well as being a Scout Sniper. Active memberships include: Founder of the USMC Scout Sniper Association, Member of the VFW, NRA, and USMC Together We Served organization. Carl also volunteers his time to Camp Patriot, a non-profit organization that is dedicated to meeting the outdoor adventure needs of combat-related disabled veterans. Currently Carl works as a contractor on DOD and DHS contracts both operationally and in an instructor capacity.
Reactions: shooter53