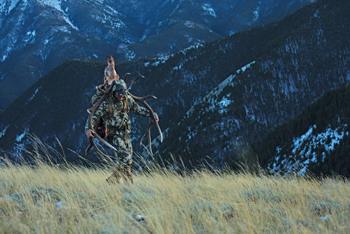 The success rates for a public land elk hunter in most units out West are very low. Typically, in the average OTC or easy draw area, a good success rate would be between 10-20%. However, we all know hunters who seem to consistently beat the odds and find great success in the exact same areas where 80-90% of the hunters go home empty-handed. From my observations and experience, there are a lot of things that consistently successful hunters do that most hunters do not. This article sheds light on one thing that has helped me find success and also saves me a lot time and energy.

The author packs out a public land bull he killed by spiking out with a lightweight camp less than two miles from a road.


Be There When They Are
When I’m up on a mountain hunting for elk, I’m not just observing what the elk are doing; I’m also taking note of what other hunters are doing. Of course I’m always trying to find an area void of other hunters and rich with elk, but finding these types of areas is rare. If you do find one, you’d better enjoy it while it lasts, because it’s only a matter of time before someone else discovers it or something changes that causes the elk to move.

The author takes a few photos of a successful public land hunt he shared with his dad where they had packed into a heavily hunted area with horses less than two miles from the nearest trailhead.


Normally, when I find areas with very few or no hunters, it usually means that the elk population is low and the hunting is tough. On the contrary, areas with plenty of elk usually also have plenty of hunters.

Even the hunters who don't fill tags often tend to find areas with reasonable elk populations, but one of the differences between successful hunters and unsuccessful hunters is the approach they take to hunting these areas. Having little competition is always nice and makes calling elk a lot more effective, but I’ve had just as much success in areas that have been heavily hunted and which house highly educated elk herds. I believe one big reason for this is the amount of time I spend in prime elk locations during peak activity times at first and last light.

Often I find that hunters I’m competing with are typically hiking to or from camp during these productive times, arriving after prime morning time and then hiking back to camp well before last light to avoid hiking in the pitch dark.

There are two ways to beat the competition in these areas and increase your odds of success. First, get less sleep than them and hike in the dark to and from prime locations that elk are frequenting.

Second, which is typically what I prefer, is to spike out with a light tent closer to the elk so that I can get more sleep and not be tired from hiking when I get to the location. This may sound obvious for hunting areas far from roads, but it really doesn't have to be a great distance to still put the odds in your favor.
Next page: Hike Less For Success >