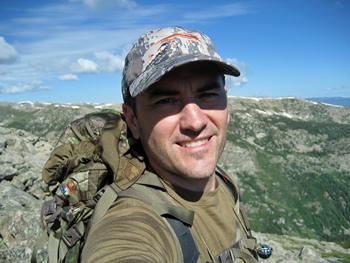 My rental car slowly rolled down the last mile of rocky gravel forest service road, with the view of the vast peaks and valleys of my final destination growing larger and more impressive with every passing minute. I was driving very slowly with an uneasy feeling in my stomach. The gravel road would have been fine for the tires on my rental car, but jagged rocks poked out from under the gravel all over the road and I had been inconvenienced in the past when vehicle tires were punctured by smoother rocks than these in the backcountry.

The other reason for my uneasy feeling was the dark, brooding stormfront that had been building around the peaks ahead of me for the past hour or so. Right as I pulled into the parking area at the trailhead the skies opened up with biblical type rain, and multiple intense lightning bolts seemed to erupt at the tops of the peaks all around me. The thunder followed quickly, letting me know the lightning was indeed as close as it looked. It was quite a show. I had been traveling by car and then plane and then rental car for the past twelve hours and my plan was to get right out of the car, throw on my pack and start climbing to the top of one of the peaks in front of me where I would spend several days solo camping and glassing in the high country. I am very aware of the risk of thunderstorms in the Colorado Rockies in the summertime, but this storm was about as intense as any I’ve ever seen and it knocked my confidence down a couple rungs before my adventure even really began. The last place I wanted to be during a storm of this intensity was exactly where I planned to go.

I waited out the storm in my rental car, going back and forth in my mind as to what my next move would be. It was only a couple hours before dark as the rain began to taper off. I didn’t look forward to setting up camp in the wet grass near my vehicle and I was disappointed that I hadn’t gained any altitude to get me closer to treeline so I could be at a glassing spot at first light without climbing several hours in the pre-dawn darkness the next morning. I noticed a bit of sky poking through the dark churning clouds to my north and quickly decided that the storm clouds were blowing to the south and would soon clear. I threw on my pack after doing a last gear check and started up the trail that headed to the southern valley.

This particular trailhead was at the foot of two valleys that split off from each other, one heading southwest and the other northwest. I had hunted the south valley for a few days last year on an early-season high-country rifle buck hunt. My partner had been archery hunting for elk and spent those days hunting the northern valley. This season I planned to bring a different partner in late September for an archery elk hunt. We would mostly hunt the northern valley, where the main trail consisted of a nasty, unmaintained, wet, tangled maze of game trails often ending in dead-ends, knee-deep marsh, boulder fields and thick, wet willow tangles, the kind of place most people have no interest in spending time.

My main goals on this solo scouting trip were to learn the trail as well as I could to figure out which spots to avoid and which routes would get us deep into the valley the fastest and least painfully. I also planned to do a lot of glassing from various high perches above timberline to figure out where the elk were living. I don’t expect there to be much pressure during hunting season to push the elk away from their summer areas by the time we start hunting in September.

I quickly veered off the southern trail and headed west into the timber. I followed a spine, gaining altitude quickly. I had studied Google Earth and topo maps for months leading up to this trip and had a first glassing spot in mind on the shoulder of the mountain peak that separated the northern and southern valleys. I had thought this route up the spine would be the most gradual yet direct, and so far my research was proving correct. The grass and leaves were soaked from the rain and I was getting a little wet as I climbed, but it felt wonderful to be back in the mountains I love so much, so I didn’t really notice. This was my first evening in the mountains since my last hunt the year before. I’d been thinking about this moment since the drive home from that last hunt.

As I continued to climb I saw quite a bit of old elk sign, including some rubs from last year. Day was fading to night quickly and I decided to look for a relatively flat spot to set up my tent for the night. After about a fifteen minute push up an especially steep section I found the closest thing to flat ground I could and quickly set up my shelter, inflated my sleeping pad and crawled into my bag. As usual, the first night on the side of the mountain sleep didn’t come easily. The forest sounds seemed amplified and unrealistic visions of black bear and mountain lion danced in my head, not to mention the fact that I was just excited to be there. The next morning I would wake early, leave my camp where it was and climb another thousand feet looking for a glassing spot. I couldn’t wait to pop out above timberline and drink in the Rocky Mountain beauty!
Next page: High Country Scouting - 2 >