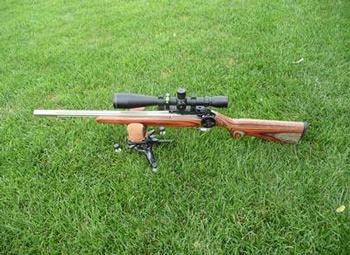 The floating dot of the Sightron LRMOA-2 reticle flirted with the center of the freshly painted steel plate. When the image looked perfect my finger instinctively applied the last few ounces to the trigger to start ignition. At the break of the trigger the bullet raced out of the barrel in a mighty battle with gravity as it climbed high above the freshly watered alfalfa field. Gravity finally won the battle as the bullet reached the apex of its trajectory and began a rapid descent back towards earth. With laser-like precision the bullet violently splashed onto the steel target within an inch of its intended destination. A soft “ping” was sonic confirmation of a direct hit.


I couldn’t help but notice that the shot I had just taken felt eerily similar to a shot from the weekend before. The major difference? The shot from the weekend before was just under 1000 yards with a semi-custom 6.5 Creedmoor, and the shot described in the opening paragraph was from a semi-custom Ruger 10-22 at 200 yards. The deadly accurate elevation adjustment was made possible by a new product available from HHA Sports called the Optimizer Horizon.

For years HHA has offered adjustable sights for archers that allow for precise holds at extended yardages. The HHA Optimizer Horizon is their first product available for use with firearms. The Optimizer will work on almost any firearm with a picatinny or weaver style rail. It can be set up for slow short-range cartridges that require sight adjustments for optimum performance between 50 and 200 yards (rimfires, shotguns, muzzleloaders, etc.) or for more standard centerfire cartridges between 100 and 600 yards.

First Impressions
The Optimizer comes in an attractive, form fitting plastic package that is easily opened without the need to use a knife or scissors. Holding the system in my hands for the first time I was impressed by the apparent build quality but surprised by how heavy it was (0.49 lbs). The adjustment dial felt very smooth and did not require excessive force. The dial can be locked in place by using the locking handle but a semi-hidden friction pad does a good job of keeping the dial in place unless you physically turn it.

Set Up and Use
Following the instructions in the package, I mounted the Optimizer to a Weaver rail on top of my rifle, mounted a scope on the Optimizer, zeroed the scope at 50 yards and then confirmed actual drop at 200 yards.

The scope I chose to use was a Sightron SIII 6-24 LRMOA-2. I chose the Sightron for its clear sight picture and accurate adjustments so I could check the accuracy of the Optimizer system against a proven scope.
Next page: HHA Optimizer Horizon Review 2 >