Getting It In The Can 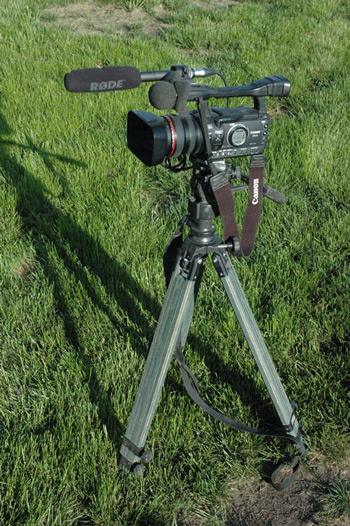 Getting it in the Can

In many ways, capturing a successful hunt on video, especially video fit for broadcast or a commercial DVD, is almost as satisfying as being the happy hunter. It can be far more difficult being the videographer as compared to being the hunter, that is for sure. Filming your buddy’s hunt or your own is certainly getting more popular, and where it once was unusual to have a camera person along, it now is very common.

Make no doubts about it, a camera can be the kiss of death for a hunt if the camera man isn’t qualified or the hunter isn’t experienced to the demands the camera makes on his hunt. The final use of the video usually controls how much of a slave to the camera the hunter is. A couple of buddies hunting get what they get; it isn’t a serious deal if the deer is out of sight when the trigger gets pulled. On the flip side I’ve been a co-host and producer for the Outdoor Quest TV series for 10 years and there is no reason for me to pull the trigger unless the animal is in frame and focused.

Dedication to get the job done right will serve anyone hoping to do this for a living well. That dedication has cost me a couple of times; one time I do remember vividly was the largest Labrador/Quebec caribou of my life. While my judgement may have been off, my mind was still screaming “book animal, book animal” as the cameraman who was shorter than me struggled to grow six inches to be able film over the scrub willows. I watched that animal walk away and while tough to do, filming a TV show is a job and you are there to get the hunt and kill shot on tape.

One of my pro staff learnt the lesson the hard way when he ran out of patience on a Wyoming antelope hunt and shot his buck off camera. The buck was big beautiful and worse - unique. There was no tape rolled on it and nothing on tape looked remotely like it. It was impossible to tell the story of the hunt and then suddenly cut to this dead animal that we had never seen being held up for a grip and grin.

The story is what it is all about. We are trying to share our hunting adventure with the viewer, and if you as cameraman can keep the thought of “the story” in your head and shoot to tell the story you will be on pretty firm ground. Quality camera work means getting all the shots needed to tell the story. Now this may sound repetitious, but you need to get every part of the hunt. The editor needs the hunter glassing the animal and video of the animal. He needs the hunter loading the gun and taking the safety off and more of the animal. A nice reference shot, say over the shoulder with the hunter and animal in frame zooming smoothly to the animal and of course the hunter pulling the trigger and the kill shot on the critter.

If you are following this in your head you realise that there either has to be two cameras there or some of the hunt has to be re-enacted. Since we can’t get the animal propped back up the hunter needs to help out. Why are these re-enactments important? They are needed for editing to make the story flow.

Here is a typical story that happens several times a year: fellow walks through my door with talk of a giant deer kill on video that he is just sure I’m going to want to put on TV. I cue up the tape in the edit suite and I watch 40 non stop minutes of a deer slowly working its way over to where the hunter kills it. The next thing I see is the happy hunter whooping it up over the dead critter. If you are looking for a video clip to share with your buddies this will do fine. Put it on TV or a commercial DVD? Not a chance.

I need the whole story from getting out the truck that morning to hiking, stalking, field judging, the works. When it comes time to shoot I need lots of the hunter as well as the critter. The reason for this is without something to go to that is out of context with that uninterrupted 40 minutes of Mr. Big ambling closer, I have no way of shortening the footage.

In TV the dirtiest words you hear are “cut to time”. Each show is edited to the frame. There are 30 frames to the second. That show has to be cut to time, to the 1/30th of a second - exactly. As an editor I need those hunter shots so that we can have time elapse and when I cut to the hunter excitedly looking at him through the binocs, it is believable that Mr. Big can be 100 yards closer when we go back to him. Amateur editors or those without the needed footage will try to move that deer across the field with jump cuts (we call it the matrix move) or a whizzy transition that looks almost as bad.
The more the show needs time to be compressed the more edit points and editing material the editor needs.

Speaking of edit points, the camera needs to be still to use the shot for an edit point. That means no panning or zooming or camera wobble. The best footage comes from a camera man using a good tripod and a broken zoom finger.

Tripods or window/stand mounts make for great video. This tripod has a ball swivel under the head making leveling the camera fast and easy.


The zoom button, of all the technical problems with a piece of video this is the easiest to avoid, yet is the most common. People can’t keep their dang finger off of the button and are constantly zooming in and pulling out; some do it so often that it can make you lose your lunch watching the video. Pick a frame size and stay with it for at least 30 seconds, I can’t cut when the camera is zooming or pulling. Likewise, learning to use a tripod or some method of stabilizing the camera is also important for high quality video, especially when zoomed all the way out. There is nothing worse than a cameraman on a long lens way out there on an animal and his hand shake or heartbeat are causing the animal to move in and out of frame.

Quick releases make on and off tripod moves quick and painless.


Important Note: Turn the digital zoom OFF. It is nothing but a gimmick and anything filmed using digital zoom is junk.

Shotgun microphone mounted. This camera has a separate mount for the unit. On some cameras, you have to use the hot shoe to hold the shotgun.


Sound or audio is a huge headache for camera men and editors. Just about none of the consumer or prosumer video cameras have quality microphones. Camera noise, usually from lens movement with zooming, is audible as well as the dreaded “white noise whine” that is prevalent when a camera is in automatic audio gain setting and it is constantly searching for sound to set the level to. If you are going to use a camera mic, learn how to set the audio levels manually if your camera supports that. Watch your levels closely while filming.

Foam filter media for a household humidifier makes a great low cost wind sock for the on board camera microphone. A rubber band can make it fit on just about anything.

Camera with the shotgun microphone and wireless microphone receiver mounted. This camera has 2 XLR inputs allowing for 2 outside sources of audio.


Better yet, buy a good shotgun mic or wireless mics and a good set of production headphones. Most cameras will support at least one and often two microphone inputs. When I’m filming one on one with a hunter I put a wireless lavaliere unit on the hunter and a shotgun mike on the camera for ambient sound. Set the audio levels manually to each host and watch your levels readout while listening to the audio in the headphones. Interference, electronic clicks and battery drop outs are only caught through the headphones. Watch out for host’s levels to change from the pre-shot whispers to jubilant post shot shouting. Clipped audio from peaking is as good as no audio. Buy a good wind sock for the mic head and watch out for wind noise as it can totally ruin a video clip. Good audio is a lot of work and doesn’t come by fluke or blind luck. It is easily the most screwed up facet of video production.


Format, what you shoot that video on, can be just as important as what is shot. Today we all film in HD or high definition. What we record the footage on is where the snag comes in. Mini Digital Video (Mini DV) tape while seeming archaic is still the industry standard and anybody can work with it. Hard Drive cameras, flash and disk all have format issues, in that some compress as they record or record in a format that isn’t compatible with common editing software. I edit in Final Cut Pro HD and there are cameras using formats like the new XD or MPEG 4 compressions that I can’t touch. Before I spend the coin to upgrade the suite I’ll wait and see what format climbs to the top of the heap. In the 10 years I’ve been filming on mini DV many have threatened to, but none have succeeded so far.

Mini DV tape is still the overwhelming choice of recording media. One strong feature is that the physical storage of the footage isn't taking up space on a hard drive.


Tape or hard drive, whatever format you record on is cheap. Make sure you get a lead in to each shot and some tape laid down after the action stops. 10 or 15 seconds is all that is required, but most new camera operators stop recording as soon as the talking ends and don’t make sure that a little tape rolls before people talk. Often the first word or two are missed making for more headaches in the edit suite.

I’ll put this one qualifier in here at the end. I said early on that what the final use of the video was controlled much of how it was filmed. Forget that. You may as well do it right from the start, and then when you do get something good on tape and want to share it with the hunting community and wander through my door, we have what it takes to make it happen.