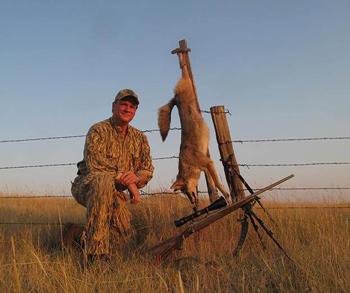 It had been a typically long hot July day in North Central Montana. Being this far north, darkness arrives late and leaves early during the summer. I typically become more lazy than usual during the heat of summer as I’m more wired for cold temperatures. I thrive in fall, winter and early spring colder weather, and this summer heat is something I can do without. I was pondering this as I looked at the brand new FoxPro Shockwave sitting in my “Man Cave”. It had arrived right towards the end of spring and I had yet to use it. It wasn’t that I didn’t want to give it a whirl so much as much I didn’t relish the thought of hiking in through the hills and sweating half to death. However, today was a little different. The high had only reached 76 degrees and it was much cooler than usual. I decided since I was feeling more ambitious and wanting to be outside, perhaps the coyotes would be more active as well. With that in mind I decided I would make one quick stand before nightfall.

I reached in my pack and pulled out my trusty FoxPro CS24B. I have called in so many coyotes with this wonderful little e-caller, I can’t even begin to hazard a guess as to how many have been duped by it. However, I really wanted to get this new Shockwave into the field and see how it would perform. So into my pack went the FoxPro Shockwave and onto the shelf went my CS24B. I sorta felt a little guilty, like I was turning my back on an old friend by leaving the CS on the shelf. I just told myself, in the name of progress I must push on. Besides, I knew that if the FoxPro Shockwave didn’t live up to its billing or I didn’t like it for some reason, I could always go back to my CS24B and live happily ever after.

I knew of a rancher that was having trouble with too many coyotes around his place. I headed out to his ranch and parked in a familiar spot where I had hunted many times before. I reached in and grabbed my pack, and did note that it was a little heavier with the FoxPro Shockwave versus the CS24B. To my surprise though, it wasn’t much heavier. In my mind not enough of a weight difference to be of any great concern for this hunt. I just figured a little weight increase for more speakers and great stereo sound was a small price to pay. To be honest, as I was hiking in I really couldn’t tell that much difference in terms of weight on my back as I walked in a half a mile to my stand location.

Once at my stand I set up the Shockwave about 30 yards downhill from me. I thought it was pretty cool how I could position the two speakers to cover two different directions, rather than only being able to broadcast one direction with my CS24B.

The area I was hunting is basically just covered with cheat grass and has very few bushes taller than about a foot to 18 inches high. There was a nice rock pile about 8 feet in diameter and three and a half feet tall on top of the hill. It had a little brush growing out of it and made for a good backdrop to break up my image. I set my stadium style seat about three feet from the base of the rock pile and got myself settled in.

Part of my settling in process is to survey the area around me for all possible approaches and make sure that I have the best visual possible for that given stand. On this stand I noticed that because of the steepness of the hill I couldn’t see much beyond 20 yards directly in front of me, but that I could see the hill opposite of me clearly at around 200 yards. I made a mental note that I would have to hope I could stop any coyotes coming in from that direction before they dropped into the valley between me and the opposite hill side.

​
I then got my rifle ready including checking the power setting on my scope. With my rifle firmly planted on my Bog Gear bipod it was time to get down to business. I turned on the Shockwave’s TX1000 remote. Even before I turned it on I was thinking to myself, “Wow this thing is really comfortable in my hand.” It is larger than the TX500 which is used with the FoxPro CS24B, Fury, and Prairie Blaster callers. The TX1000 has a full color LCD screen with LED illuminated buttons. Not only are the buttons illuminated but they are raised and easy to feel with your fingers, even with gloves on. I know because I tested it with gloves on when I first got it. The TX500 remote buttons are not raised and sometimes problematic in the winter time with gloves on. This new TX1000 remote for the Shockwave is a MUCH BETTER design!

I decided to start off my stand with baby cottontail sound. I started it with a relatively low volume setting and gradually increased the volume over a 5 minutes time frame. I then switched to a jackrabbit in distress sound at a medium volume setting. The caller worked flawlessly, responding very quickly to the sound and volume changes.

Then I remembered the FoxPro Shockwave caller has a feature called FOXFUSION which allows the caller to play two sounds at once. Not only that, but one can control the volume for each sound independently. So I pressed the FOXFUSION button on the right side of the remote and then added some magpie sounds to the jack rabbit in distress. I was amazed at just how clear and “real” everything sounded. Holy smokes! Technology has come a long way from blowing on a little wooden hand call.

I let this sequence play for 10 minutes, but I did randomly mute the magpie sounds, rather than let it run the whole time. In the past I would just use a hand call to imitate a rabbit in distress and then turn on my FoxPro to play the magpie sound along with my hand calling. This new FOXFUSION feature really helps keep the caller focused on looking for a coyote rather than fiddling back and forth with hand calls and remotes. Kudos to FoxPro for developing this, it is a really cool feature.

It was now getting quite a bit darker and I don’t have more than about 15 minutes of shooting light left. I decided to use coyote vocals and switch to coyote pup in distress. The sound hadn’t been playing more than 3 minutes when I spotted a pair charging in hard to the north. They were headed right for that valley that would put them out of sight if I didn’t get them stopped in time. Just before they hit the 200 yard mark, I muted the caller, and I tried to bark them to a stop. They weren’t having it and kept coming at full speed. Crap! They reached the valley and disappeared from sight. Now I knew things were going to happen fast and get real up close and personal.

My wait was short lived as a coyote popped up right in front of me at around 10 feet. There was no way I could move my rifle fast enough to get it in the scope and pull off a shot before it would bust me and leave. What I would have given to have a shotgun in my hand at that moment. Just as I was trying to figure out what to do, I caught movement out of the corner of my eye to my right, just about where I had set my caller at 30 yards. It was the other coyote. He was staring right at the caller. It never ceases to amaze me how coyotes can pinpoint the exact location of a sound. He was so focused on the caller I was able to turn slightly and get him in my scope. BOOM! One coyote down!

morning, there was an article on this site, saying the shockwave is not weather proof??
do the instructions have anything about weatherproofing?? GBOT TUM