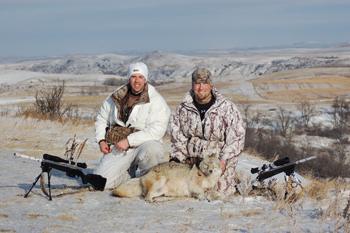 The snow groaned under our collective weight as we ducked our heads and squinted against the 20+ mph winds slapping us in our already raw faces. At a real temperature of 19 below zero, the wind just added to an already brutally cold morning.

My hunting partner, Ben Cade and I were hunting a pasture near an abandoned farm house with goats, horses and a handful of cattle there. A long narrow grove shielded us from the wind momentarily and for a minute we thought it wasn't so bad. Reality set in when we got on the other side of the windbreak and the wind was once again blowing snow and taking our breath away.

Just the day before, we had seen a coyote sitting boldly on a round bale right in the barn yard. Opting to pass him up for lack of a clear shot, we decided to return in the morning and do some calling and see what happened. The farmer informed us that he was "infested" with coyotes, so we were looking forward to a great hunt, bitter cold or not. In hindsight, we probably should have tried to get a shot at that coyote when we had the chance.

We were now a mere 100 yards from the farm and just as we cleared the crest of a small ridge, we both froze and slowly dropped to the ground, reaching for our bipods as we dropped. We had each seen in the distance 3 coyotes well below us and running on a frozen cattail slough. Before I could even try to range it, Ben hissed to me, "There are five there now!" I began ranging various objects to get some reference points for fast shots, but even with my favorite rifle, a Tikka T3 heavy .308, I wouldnt take a shot over 250 yards with the wind the way it was. I doubted I could see far enough to make an accurate shot anyway.

Snow was drifting and hitting our faces with tenacity now, and we used our off hands to shield our faces as best we could. I couldn’t have taken even an easy shot at this point. Sensing the same thing, Ben began sliding backwards inches at a time to get below the crest. It took us a good 15 minutes to do this, but we didn't want to risk getting busted now.

Safely out of sight and well out of earshot, we began walking to the pasture and planning how to call these five coyotes. We decided, goofy as it was, that we had to be upwind of them so the sound could carry down to them. Winds were a little over 20 mph, and gusts pushing 30 were happening with ever increasing frequency. We had to get them close, had to hope that we were scent free, and had to hope that whatever scent we may have had on us would be blown wildly around or over the coyotes well below us in a valley.

As we double timed it through the pasture, the livestock paid little attention to us. We hadn't walked 80 yards yet when Ben stopped in his tracks, staring straight ahead. I already had my rifle mounted and was glassing the spot he had seen. I confirmed what he had seen with a nod of my head, and we both slowly made our way to the grove of trees to our right to get out of sight. Once there, we decided we would use the grove as cover, get to the end, split to each side and leave the coyote in a kill zone between us. The first one to get the shot would take the shot.

We took our time, noting that the coyote appeared to have been sleeping when we saw it, and judging by the size of the drifts forming around him, he had been there awhile. In what seemed an eternity, I reached the end of the grove. Rifle mounted in a high ready position, I crept forward, and the coyote didn't move. Placing the reticle of my VXIII on his head, I could see his eyes were now open, staring right at me, but it was obvious he couldn't see a thing. Wind blew drifting snow so hard that it was painful to even try to look into the wind. Even though it was less than 80 yards, I decided to lean forward and rest on the top of a wooden fence post to take the shot. That helped ensure that I wouldn't shoot the fence as well as providing a steady rest.

Surprised that a shot hadn't taken place yet, I flipped the safety and squeezed the trigger. The recoil made the view go blank momentarily, and when I got back on target I was stunned to see the coyote running right at me! He was hunched and obviously hurt, and had no clue where he was going. Running smack into the fence at the 4 cornered intersection, he did an about face and ran straight away. I touched off one more shot and took him off his feet and onto his back. I couldn’t believe he was able to run after being hit by a 150 grain SST, but he did, and firing the second shot was sure to pinpoint to the other coyotes where we were. Mad that I didn't take the head shot, but happy to have fur on the ground, I began busting drifts to get to him.

Article Tools
Twenty minutes into the set I saw a coyote running away from me at around 300 yards. Not knowing what spooked it, I decided to wait it out and not risk educating it if I missed. As it trotted out of sight, I heard a single rifle report. I was sure that Ben had finally seen it, but, couldn’t imagine him trying a shot like that either. Realizing that he must have seen a different one, I picked up my pack and began busting through the often waist deep snow to get to where Ben was and help him drag out his coyote.

Twenty yards from there, Ben motioned frantically and said that his gun was frozen shut, literally. He was able to get off one shot, and then couldn’t even work the bolt. It was a clean miss and the pair of coyotes that had come to the call and put on the brakes at the 200 yard mark had now trotted off to around 450 yards. They had stopped to see what all the fuss was about. I was running to get to Ben as fast as I could, but busting a trail was not easy, nor was it quick. As I broke the trail, I adjusted the power on my scope all the way to 20 and began scanning for targets. Dropping the bipod as I dropped to the ground, I started guessing the wind and distance.

The first shot impacted the snow right in front of the pair, and I knew I was very close to making a tough shot. Making a quick adjustment, I was about to pull the trigger when the pair of young coyotes decided they really needed to get moving. I squeezed one off and scored another clean miss at the coyotes, now 500 yards away. They stopped again at our best guess of over 600 yards. My best chance at them was gone now, and had I not shot at them already, I probably wouldn’t consider the shot now. Using the Varmint Hunter reticle and still having to compensate some hold over, I squeezed off another shot. It was clean miss, impacting well above the pair. They gave me one more chance at a distance I don’t want to repeat, and then they were gone, now very well educated.

We finished the hunt with just a pair when we should have absolutely had three coyotes, could have had four, and with a little luck could have had five or six. Had we not adapted and moved on to a different style of hunting with the extreme weather, we likely would have come home with nothing! In weather like we experienced, you take what you get and you are happy with it!

You have heard it a million times, but dressing in layers is an absolute must. The ability to unzip or remove clothing while walking to the next set is a must. This will reduce scent, and will keep you from overheating and then sweating, which is bound to make you cold later.

Wearing clothing that breathes is a must. I start with a base layer of Under Armour, and depending on the temps, will follow it with an Avery polypro Brutal Wear top. I prefer military BDU pants as they are cut more generously and make it easier to layer. I will then wear waterproof bibs and a parka and a lightweight fleece stocking hat. If bibs are not an option, then Gore-Tex rain pants are a must to keep you dry while sitting! Facemasks are worn on the set, but rarely while walking, as it builds up too much heat. Later, that moisture can freeze and be very uncomfortable.

Boots should be lightweight but well insulated. I use 1200 gram Thinsulate on the coldest days, and 600 on warmer days. Wool socks are the only thing I will wear inside them, as it is very easy to get wet feet, and the wool will insulate even while wet. Spare socks in the truck or backpack can be a lifesaver!

Gloves can be cumbersome, but when the temps are well below zero, you don’t have much choice. I will often use a neoprene handmuff with disposable handwarmers inside. I prefer to use the muff for my shooting hand at the very least so that I can shoot glove free. Bringing extra gloves, one set for walking, the other for on the stand, is also never a bad idea. This keeps at least one set fairly sweat free, which in turn keeps you warmer.

Stay hydrated. Even in brutally cold weather you can easily get dehydrated. Heavy sweating while walking or dragging out your coyotes can drain you of fluids in short order. Stay hydrated and you will stay warmer. Finger food in your pockets or pack will keep your energy levels up as well. I don’t hunt without a pocketful of fruit snacks and/or jerky to have along.

In unknown areas make sure you have a map and/or a GPS along with you, or if you are old school, a compass. Let someone know where you are going and when you will return. And if you change areas, let someone know.

Keep binoculars and rangefinders either in a pocket or backpack. Keeping them around your neck tucked inside a coat is bound to make them fog up when you they move from your warm body heat to the extreme cold. Keep extra batteries for GPS and rangefinders with you, or in your vehicle. Cold temps will drain batteries quickly.

Likewise, keep rifles safely in the back of a truck rather than keeping them in a warm cab and then moving them into the extreme cold. This will save the optics from fogging or, worse yet, freezing after fogging.

And finally, stretch before trudging through the snow. Cold temperatures can tighten muscles and make you less mobile. This will make you work harder and sweat more, which of course can lead to overheating and then eventually to becoming chilled.


Mark Brendemuehl is a freelance writer and photographer from Minnesota. He is a member of the Avery Outdoors Pro-Staff, Team Eukanuba, and the Tri-Tronics Pro-Hunt club. When not chasing birds with a shotgun and a camera, you will find him chasing predators with a rifle.