Do Bullets Go To Sleep? 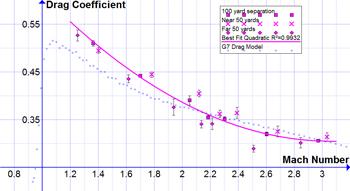 Do Bullets Go To Sleep?

Introduction
There are a lot of hand waving explanations of bullets going to sleep being bandied about at shooting ranges and internet discussion forums, but Bryan Litz has a pretty good description of the more rigorous theory in the article at the Applied Ballistics, LLC, website on “Epicyclic Swerve.” (Litz, 2012) Bryan also describes the effect of pitch and yaw increasing drag in the article “Accurate Specifications of Ballistic Coefficients” originally published in Varmint Hunter Magazine and also available at his web site. (Litz, 2009a) Bryan has also published a great video entitled “Pitching and Yawing of a Bullet” on YouTube. (Litz, 2009b) While these resources do a great job explaining the theory elucidated by numerical solutions to Bryan’s six degree of freedom model (which is built on Robert McCoy's techniques), to our knowledge, actual observation of these effects has been limited to extremely specialized test equipment and facilities such as spark photography at the BRL free flight aerodynamics range. (Braun, 1958; McCoy, 1988; McCoy 1990) Consequently, detecting pitch and yaw requires expensive equipment that is unavailable at most facilities. The technique presented here requires only three optical chronographs and can be implemented at almost any 100 to 200 yard shooting range.

Previous attempts to demonstrate the damping theory with more common equipment (for example, Halloran et al., 2012) may have failed to detect pitch and yaw damping because they were looking for a decrease in ballistic coefficient with range, and this approach is confounded with possible variance of the actual drag curve from the predicted drag curve of the G1 or G7 drag model used to determine the ballistic coefficient. Drag on the bullet might be varying with range due to the decrease in velocity AND possible damping of pitch and yaw, so that the two effects might be obscuring each other. It is also possible that the cases tested previously might have simply not had significant yaw angles (or tip off rates) when they left the barrel, as this possibility is suggested from the high-speed video failing to show the expected yaw angles. Multiple, precision triggered high speed video cameras have the potential to detect pitch and yaw damping, but this equipment is very expensive and replicates (using more modern equipment) the essential elements of spark photography technique.


Method
The experimental design to quantify damping of pitch and yaw uses three chronographs simultaneously. We’ve found that CED Millenium chronographs with LED sky screens meet their specification of 0.3% accuracy and can be calibrated by placing all three in a row, with minimal separation, and shooting though them. Each reading of the second and third chronograph is adjusted upward appropriately for the small loss of velocity (< 5 fps) over the two to four foot distance from the closest chronograph. Then the average velocity of ten shots can be compared to determine systematic variations in the readings between the three chronographs. In this manner, the variations between chronographs can be reduced to 0.1%.

After calibration, the three chronographs are placed 10 feet, 160 feet, and 310 feet from the muzzle. Chronograph separations are measured with a tape measure and are accurate within a few inches. With this arrangement, velocity losses are simultaneously determined for each shot over 100 yards, the near 50 yards, and the far 50 yards. This data is then used to determine drag coefficients over the three intervals for each shot. The average and uncertainty of the drag coefficient for each powder charge can then be determined through standard statistical methods. To achieve a range of muzzle velocities from Mach 1.4 to Mach 3.1, 40 grain Nosler Ballistic Tip bullets were loaded in .223 Rem Lapua brass in front of 6, 8, 10, 11, 12, and 14 grains of Blue Dot and 29 grains of CFE 223. Ten shots each were fired for each powder charge except for 6 grains, for which 20 shots were fired. (Earlier work had shown greater shot-to-shot drag variations in this load, so more data points were desired.) The rifle used was a Remington 700 ADL with a 1 in 12 inch twist.


Results
Figure 1 shows results for drag coefficient vs. Mach number for the 40 grain Nosler Ballistic Tip. All of the drag coefficient measurements above Mach 1.5 for the near 50 yards are above the curve for the 100 yard interval. This indicates support for the theory that increased pitch and yaw cause increased drag early in the bullet's flight. However, note that the error bars of some of the points intersect the curve. This limits the confidence level regarding the definitiveness of this conclusion. It is unclear whether some points are closer to the curve because of smaller initial yaw angles for those loads or because of measurement uncertainties. It is uncertain whether the near drag coefficient at Mach 1.4 is so close to the curve due to the steep transonic drag rise or a small initial yaw angle for the load with 6 grains of Blue Dot.

Discussion
Previous experiments using widely accessible equipment that attempted to quantify damping of pitch and yaw were focused around a decrease in ballistic coefficients, not drag coefficients. The experiment reported here was carefully designed to eliminate as many confounding factors as possible to increase confidence in the results. To our knowledge, this is the first published data using optical chronographs in support of the theoretical prediction of reduced drag as pitch and yaw are damped out. This experimental design is expected to be useful in distinguishing between deviations from a given drag model due to the shape of a bullet and increases in drag due to pitch and yaw and should be useful in a wide variety of situations where experimenters desire to detect pitch and yaw in a given combination of bullet and rifle. Of course, introducing fourth and/or fifth chronographs to extend the technique to possible third and fourth 50 yard intervals has the potential both to better quantify the range over which pitch damping is occurring, as well as give greater certainty to the results.

Acknowledgments
This research was funded by BTG Research (www.btgresearch.org) and the United States Air Force Academy. The authors appreciate the use of Dragonman's range.