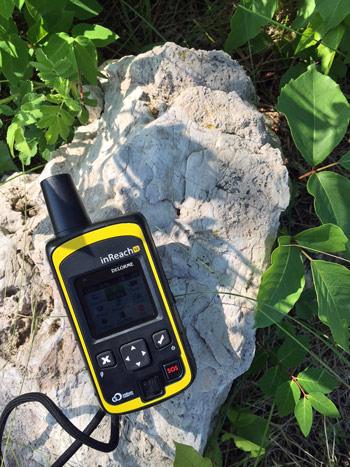 Back in January 2014 I began planning a backcountry elk hunt in the Mt. Zirkel wilderness area of northern Colorado. I planned to backpack roughly five miles off the road and set up a spike camp to hunt from. I had not intended to go alone and was confronted with a big dilemma when my best friend and hunting buddy told me the sad news that he would not be able to go. I did not want to go on the hunt by myself for safety reasons and could not bring myself to cancel the hunt altogether. I began frantically looking for another hunting partner but was unsuccessful.

It was at this time that the Delorme InReach line of satellite communicators first came on my radar. I had seen satellite SOS beacons before but never really considered purchasing one because I never saw the need. Now I saw the need… Every time I thought about solo hunting second rifle season in the Colorado Rockies all I could think of was the story of Aron Ralston, the climber who was pinned by a bolder and eventually had to amputate his own arm to survive. I didn’t want to end up like that and I also didn’t want my wife to worry over me for a week wondering if I was dead or alive.

Delorme has produced a unique and interesting product in the InReach line of satellite communication devices. I began comparing the different models and their features and weighing the features against the prices. This led me to the InReach SE, it seemed to be the best bang for the buck. I didn’t need the GPS feature of the Explorer and wanted more than the basic model had to offer; naturally the SE seemed like the only way to go.

I know what you’re thinking. Does it work, or not? The answer is yes. After roughly 5 weeks and 50+ miles of hiking through the Black Hills of South Dakota I can say that I’m pleased with the performance of the InReach SE. I hike and jog in the Black Hills often for fun and conditioning and because they are literally in my backyard. However, I lose cellphone reception almost instantaneously once I step off of the paved road and onto National Forest land. The lack of cell reception makes life difficult for someone of my generation, mid 30s, seeing as how we seem to be tethered to technology. The InReach allows someone like me to stay connected to the outside world while being far from cell service. Don’t get me wrong. This will not replace your work computer or allow you to function in a work capacity while off the grid. The available plans are very limited in the number of text messages that can be sent and overage charges are pretty high. This is strictly a survival device. Or it could also be considered a wife anti-anxiety device. I, like most married hunters, have a wife that tends to worry, and I found the InReach SE most helpful in letting my wife know that everything was okay.
The InReach SE has three basic features that I found useful.

First it can obviously be used to send text messages outside of cellphone service. I was not sure how this function would work because I had read about the device pairing with a smartphone via. Bluetooth. I did not know how a message was sent or received, whether the InReach simply became an antenna for the phone or if it worked independently. The answer to that question is yes. It does allow the phone to send text messages, however it must be sent through the Delorme InReach Earthmate app. The phone’s regular texting app will not work with the InReach. Also the text message is sent from a different phone number designated by the InReach, not the phone. This is okay as long as the person to whom you send the message knows that it will come from a different number.

We sell these plus satellite phones in the LRH Store.

Our wives are much more supportive of our wilderness adventures because of the safety provided by these tools.​
-Len Backus-​
The messages can be changed at any time, but must be done from an internet connection. Also the InReach device itself does not display the content of the preset messages, so you must remember what the messages are, because they are just labeled “preset 1, 2, 3.” The ability to pair with the phone in sending messages is a godsend because the InReach SE is slow in messaging. I tried sending messages both with the InReach SE by itself and with the phone. Both methods worked, however it was much faster with the keyboard of the phone than the arrow buttons of the InReach SE.
Next page: Delorme InReach SE Review >