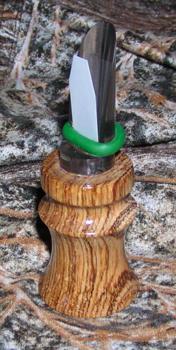 In the first part of this series we covered some of the very basics of the target of our interest, the coyote. By understanding some of the basic behaviors of the intended quarry we can be better equipped to be more consistently successful in our predator hunting. In this article, I am going to cover one of the most fundamental tools for coyote hunting - the predator call.

The one most basic need of the coyote that you will be exploiting in your hunting will be the absolute need of the coyote to eat. It doesn’t matter the time of the year or the weather or any other thing … to be able to survive a coyote has to eat. The coyote is an opportunistic omnivore and therefore can eat a huge variety of things from berries to bugs, but they don’t have those large canine teeth for nothing and the major part of their diet will consist of prey animals. These prey animals can range from mice to birds to rabbits to deer. Just about anything that the coyote thinks they can take down is likely to become supper and this includes your small house dogs and cats.

Survival in the wild for this predator is also a matter of economy of action so the sounds of a prey animal in distress means an easy meal with a minimum output of energy to obtain that meal and is hard for the coyote to resist. In all reality, it doesn’t really make a large difference which distress call that you use since the coyote is willing to take on any target of availability. You don’t even need to use the sounds of a prey animal that is found within your hunting area. It is perfectly fine to use the sounds of a snowshoe hare in the middle of Oklahoma or a jack rabbit in Michigan. It is the distress in the calls that matter more to the predator than what is making the distress. A different sound from the commonly found animals in your area might even entice the coyote to respond more readily to your calling.

There are basically two methods of creating the sounds to lure the coyote into shooting range. You can use hand calls where the user holds a call within their hand and then uses their own breath to blow across a reed and produce the sounds or you can use an electronic caller which plays the sounds at the press of a button. Each of these methods works well and each of them has their strengths and weaknesses. We will cover both of these major types of calls.

The hand call is preferred by many who like the simplicity of usage and the fact that they are the ones who are physically controlling the sounds. Using a hand call will allow you to impart inflection and easily adjust volume and tone or start and stop the sounds instantly. It also makes you a more integral part of the overall calling experience and to perhaps even create a sense of pride at being able to call in a coyote using sounds that you yourself created. It does make calling in a coyote more personal. You can purchase many different varieties of production hand calls from about any sporting goods store or you can also have a custom hand call that is made and tuned to suit your exact preferences. There are two forms of hand calls and they are named according to how their reeds are configured. These will be an open reed call and closed reed call.

You can have a hand call custom made to your specifications like this example created for the author by ArkyYoter Game Calls.


The closed reed call will be a call that does not have the reed exposed outside of the barrel of the call itself. The reed will be contained within the barrel and these reeds are typically made of metal. These calls are very easy to learn to blow but are somewhat limited to the range of different sounds that you are able to produce on them. Most of them also will freeze in cold temperatures as the moisture from your breath will freeze the reed shut. To prevent this from messing up your stand in cold weather it is a good idea to have multiple calls on your lanyard and to keep them either within your outer clothing to keep them warm with body heat or keep them within a pocket with chemical hand warmers.

Closed reed calls are very easy to learn to blow, yet effective on coyotes. A great call for beginner and experienced alike.


The open reed call is one that has the reed that is exposed outside of the barrel of the call. You can place your lips or your teeth directly onto this reed to make the sounds by then blowing across the reed. This type of call is harder to learn to blow well, but it is a very versatile call. You can produce about any sound that you need to by using this one type of call. You can instantly switch from a cottontail to a jack rabbit to a bird to a coyote KiYi by just changing the position and pressure of your lips and teeth on the reed. The reeds on this type of call are typically made of Mylar and are not as prone to freezing as the closed reed calls are. The disadvantages of using a mouth call are that it requires motion by the caller to produce the sounds well and it also puts the attention of the incoming coyote directly upon the source of the sound.

Open reed calls take more time to master but can produce a plethora of different sounds making them a valuable tool for the coyote hunter.


It is hard through the written word to explain exactly how to blow the calls to make the sounds, but for the mouth calls you will typically create your sounds by cupping your hands over the end of the barrel and then blow into the call while opening and closing your cupped hand to produce a frantic sound. Normally you will create a series of these screams for about 10 to 30 seconds and then you will create a pause in the sounds for about an equal amount of time as you catch your breath and this also gives you time to scan for incoming coyotes. You might start out the calling at low volume and then increase the volume with the passing of some minutes to try to avoid making the sounds too loud for nearby coyotes if you think that this might startle them. The coyote can hear extremely well so it doesn’t take an awful lot of volume for them to hear you.

We now move into the magic of the push button predator caller. If you can push a button on a remote control then you can be a predator caller by using one of the various electronic predator callers that are prevalent in the world today. The electronic call has a lot of advantages to it, but it does remove most of the “personality” out of the calling process. You can’t deny the effectiveness and efficiency of this type of method, though.

Most of the top end electric callers will also function with a remote control and this feature increases the overall effectiveness of the call several fold. You are able to remove the source of the sound from the actual location of the hunters which allows you to better play the wind and also get away with more movement. You can easily vary the volume of the sounds or turn them on and off as the needs arise. You can rotate through a huge variety of different sounds on the same calling set. These calls can produce more accurate and realistic sounds with more volume than most people are capable of doing on their hand calls. You can hold hundreds of different sounds within the call. If you ever want to try bowhunting for coyotes then the use of an electronic caller will greatly improve your chances of success.

The disadvantages of these types of calls are that they are more bulky than just using a set of hand calls hung from a lanyard and their cost is quite a large sum more than a hand call. The better electronic callers will cost you over $700 compared to about $30 dollars or so for a very nice hand made custom call. They also run on batteries which you may forget to charge or may run down during the calling day. There is also the aspect that is removes some of the personality of the calling for those who think that the actual calling is an important part of the overall experience.

Some of the best electronic callers on the market today are produced by FoxPro. I had the opportunity to hunt with Mike Dillon of FoxPro this past February and he is also a very nice person in addition to having one of the best tools for the coyote hunter around.


This is a basic overview of the calls and types of calls that the aspiring coyote hunter will use in the pursuit. All of these types of calls can and do work and the hunter should consider which method that they would like to employ and then get out and try it. You can easily get into the coyote calling business for as little as a $10 purchase of a production based hand call and a little practice and you can also easily spend a thousand dollars or more on a wide variety of hand calls and electronic calls. If I were an absolute beginner to this sport then I would start out with a closed reed call and try to listen to some sounds that are typical of prey animals in distress and then practice on the call until I could mimic them. You will be able to produce those sounds very quickly with the closed reed call and then be ready to try your luck.