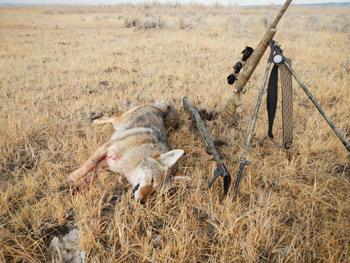 The camouflage industry is flourishing. New patterns emerge every year, new materials become available and everyone has their favorite pattern or patterns. People get attached to their favorite camo patterns. It seems that critiquing someone’s favorite camo pattern is akin to bad-mouthing their mother—you better be ready to fight! I love camouflage. It makes a statement. It shows our outdoor heritage. It makes us feel stealthier. And, proper camouflage actually does serve a purpose in the field by helping the hunter blend into the surroundings and breaking up their outline, disguising the human form. Coyotes are amazing animals with some of the most acute senses of any animal. To take them consistently requires a hunter to do many things big and small correctly. Proper camouflage and concealment can help up the odds.

Part of the proliferation of camouflage patterns is due to the fact that one size doesn’t fit all. Different vegetation types as well as changing seasons require different colors and/or patterns to maximize your ability to blend into the flora. Becoming the bush depends on the bush you are trying to emulate. Add to all of that the differing requirements associated with different ways of playing the game and choosing your camo becomes even more complicated. The camo needs of the long range rifleman are next to nil unless you are mixing in some calling stands. Shotgunning called coyotes is a whole ‘nuther ball of wax.

Writer Tim Titus owns and operates No Off Season, an on-line predator and varmint hunting store and guiding business. You can check it out at
No-Off-Season.com.​
At close range, coyotes have an uncanny ability to pick out a hunter. A close friend of mine was killed in an auto accident a few years ago. He was an extremely dedicated bowhunter. He told me that 200 yards is “radar range” for mule deer. It is certain that coyotes within shotgun range have radar all their own. Any movement will be noticed immediately. Even with head-to-toe camouflage, a coyote will spot movement immediately so when you make your move, you’d better be ready to shoot.

Coyotes are color blind. Reds are particularly gray to them but they may see blues somewhat better. (Gerry Blair is famous for calling a coyote in a Santa Claus suit.) That said, effective camouflage clothing needs to be of similar hue to the vegetation you want to hide in. The actual color of the pattern is less important. However, this suggests that blue jeans might not be the best choice for calling. The more effective camo patterns will also be more “open” with larger areas of color. Finely detailed camo patterns that have a more monochromatic color scheme will look like one color from a distance. This isn’t a make or break issue for a given pattern but it changes its effectiveness. Three dimensional camo fabric adds much to your camouflage.

The ghillie suit made famous by our military snipers may be the most effective camouflage yet. Whether it is necessary for your hunting situation is up to the hunter and the animals he or she is hunting. The benefits of the ghillie are offset by its weight, its propensity to gather twigs and burs and in some instances its way of getting caught in your rifle bolt or the charging handle of your AR and barbed wire fences. Nonetheless, it is no doubt some of the best camo available. Leafywear, lightweight ghillies and ghillies made with cloth strips are available or you can make your own to fit your specific area.

Although camouflage gets an almost inordinate amount of attention, our real goal is concealment. Camouflage is just a part of concealment. Concealment is the sum total of all you do in your set-up and your camouflage. If a hunter hides behind something, camo clothing would be unnecessary. But, I learned early in my coyote calling career that it was a poor idea to sit behind brush when calling. The same brush that hides the hunter becomes a liability to getting a clear shot when the coyote arrives. Pop-up blinds are an example of being hidden without need for camo clothing. However, blinds take time to set up and transporting the blind from stand to stand becomes a complication. For most of us, blinds are impractical and with good camouflage and concealment tactics, unnecessary.


As mentioned already, concealment requires camouflage clothing that blends reasonably well with whatever the background is. My brother uses a ghillie suit with lots of dark green and browns. It is an amazing piece of camouflage in the forest or in scattered juniper but in the desert, it stands out like the proverbial sore thumb. Choose something that is the correct hue for the area you’re hunting. A pair of Carhartts and a plaid shirt of the right hue is more effective camouflage than the latest pattern with the wrong shades of color for the hunting area.

Break up your outline or silhouette by sitting in front of something. A single bush or Yucca plant can provide enough backdrop to make you invisible to a predator if you ensure your head and shoulders are below the top of the bush. Keep the perspective of the incoming predator in mind. An animal coming up slope may cause the hunter to become skylined as they approach from below. And, while we are discussing skylines and outlines, be sure to use any cover you can when cresting a skyline heading for your stand. The top of the hill is not the place to stop for a meeting with your hunting partner or to make final decisions on your set-up location. Move quickly below the top of the ridge before stopping. The physiology of the coyote eye makes it unlikely that they have acute distance vision but a skylined form is much easier for animals to pick out.

Those same eyes that don’t see well at long distance pick up quick, jerking movements easily. So, whether on stand or approaching your stand, avoid quick movements or gesturing with your arms or shooting sticks. It is rare that anyone stays absolutely still on stand. In most situations, some movement is required to see approaching predators. Concealment requires those movements to be slooooow. Quick movements by hunters result in many predators keeping their skins intact rather than ending up in the fur shed. Cats are even more acutely aware of movement. They are also more methodical approaching your stand. Cats are stalking the sound they hear. They are very visual, making concealment and slow moves even more imperative than with coyotes.
And, before leaving the area of movement and concealment, whenever possible make your moves while the predator is moving. A stationary animal has a much better chance of seeing movements around it than an animal in motion. If the coyote is stopped and scanning the area, don’t move!

Setting up in the sun makes it much easier for predators to detect you, while the sun shining in the approaching predator’s eyes makes it more difficult for them to see. If you’ve ever forgotten your ball cap or brimmed hat and hunted towards the rising or setting sun you will understand the wisdom of this. Pay attention the next time you watch an episode of Predator Quest and see where the shadows are falling. If the sun is out, the shadows are falling away from the camera and hunter. Sure, it makes for better footage, but it also puts the predator at the disadvantage. Whether you like Les Johnson’s show or not, he knows a couple of things about predator hunting.

What are my current favorite camouflage patterns for the desert? Although it is fairly even in tone, the color of Mossy Oak Brush works well in our sage and greasewood areas. King’s Desert Shadow and Snow Shadow are favorites and lately I’ve been using the Vais camouflage pattern from KUIU. It is a high contrast, open pattern that works in more environments than a person would think at first glance. The new Highlander pattern from Kryptek is going to be a winner in the desert. When specifically attempting to shotgun coyotes, I wear a lightweight ghillie jacket from Cabela’s made with strips of MO Brush cloth and a Quick-camo hat/facemask combination in Desert Shadow. Any gloves that hide the shine of your hands are also helpful.

My son Ben and I met a friend, Dale Casey, to hunt a property he was living on. After the rancher finished feeding the cows, we slipped out and set up next to an island of uncut grass and brush in a hay meadow. Although there were three of us in a relatively small area, we were all wearing appropriate camo clothes and were setting with brush or tall grass behind us. Less than four minutes into the set a mature female came hard across the meadow towards the call. She ran straight to the caller and stopped and stared at the decoy, totally oblivious to our presence less than five yards away. A load of number four buck was more than effective at that distance. I looked over at Dale who had a big grin on his face. I grinned back as if it happened every day. Memories were made and fur was in the truck. Would we have been successful without the camo? Possibly, but it was a circumstance that made a high level of concealment necessary.

The next time you think camouflage, broaden your perspective and try to think in terms of concealment. Camo is good but concealment is the real objective. The level of concealment required will depend on your circumstances and the wariness of the coyotes in your area. I tend to err on the side of caution when hunting predators. Predators are some of the most difficult animals on the planet to hunt. Take every precaution necessary to get sufficient concealment. It will put more fur in the shed and fewer coyotes will leave with their degree in their paws. Besides, when it all comes down to it, I just like gear.