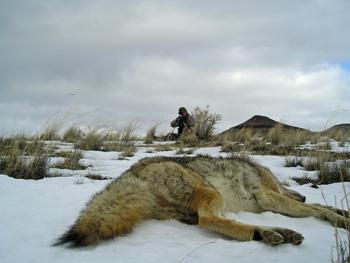 A handful of white clouds floated across a bright blue sky as we walked along the two-track ranch road moving to another stand. I suddenly realized that each step I took was placed with purpose. The more I thought about it, the more I realized that almost everything I do while calling predators is done on purpose, deliberately, if you will. I simultaneously realized how valuable this is to successful coyote calling and how boring an individual I may truly be! Spontaneous, I am not.

My analytical personality rarely ceases to operate regardless of what I’m doing. Combine that with mild Obsessive-Compulsive Disorder (OCD) and there are few things I care about that I do on accident. My nephew, Gus Titus, is an up and coming taxidermist (Great Basin Taxidermy). He has been mentored under one of the nation’s leading taxidermists. His mentor, Patrick, developed the AFLAC duck and pioneered some amazing taxidermy creations for movies like Wilbur the pig on Charlotte’s Web. Gus says that he and Patrick just refer to OCD as O-C. They don’t consider it a “disorder”! I’ve picked that up for myself. The slogan, “It’s not just a passion but an obsession,” starts to hit pretty close to home.

In predator hunting, consistent coyote calling success does not come with one magic bullet. There is not one perfect hand call or electronic caller that will buy you success. Nor is there one perfect sound that guarantees a response from coyotes. Neither will perfect camouflage ensure a coyote’s demise. Consistently calling and taking coyotes requires that many small things be done correctly on each set to bring about success.

Your set-up may be perfect, your latest and greatest e-caller may be playing the finest rendition of the sound they love, your rifle might be the most accurate in the world, yet a bad approach to your stand can blow the opportunity before you begin calling. By the same token, your approach may be ninja-like and your sound perfect but a movement at an inopportune moment will send the coyote on a reverse course, making an effective shot more than likely impossible.

Can a hunter kill coyotes without a purposeful approach? Sure. It happens but more often early in the “season”. Later in the season, with higher hunting pressure, with reduced numbers of young and uneducated coyotes, shot opportunities will become fewer and fewer. In September, with abundant pups and after a summer of little to no hunting pressure, a haphazard approach may result in four coyotes running to your call, causing the hunter to be filled with delusions of grandeur. The same approach may find a lot of cold, fruitless days in the field come December, January or February. Consistent success requires critical evaluation of strategy.

For instance, with the exception of the mobility impaired, everyone can ensure they are out of sight of their vehicle before starting to call. In flat country with high brush as in the Southwest, this may require only a 100 yard walk. If you can find a rise to park behind or a dip big enough to swallow your vehicle, it will shorten the walk. In the areas we hunt, we just do whatever we have to do to get out of sight of the vehicle.

If necessary, we’ll use a camo net to cover the vehicle. I keep two pieces of camo net duct taped to each side of the cab of my Polaris Ranger. They are held in place with some Velcro and can be deployed down the doors of the cab. Another 10’ by 20’ net covers the rest of the Ranger. It’s relatively quick to deploy and makes it possible to use the Ranger in some areas that would otherwise require walking. Less time hiking equals more stands. More stands mean more coyotes. But keep in mind that if it’s necessary to cover your vehicle, it is possible the coyotes have already seen you drive in. We use this tactic primarily when coyotes may come into view of the vehicle while responding to the call.

Conversely, no one is completely silent when moving to a stand. Complete silence is neither necessary nor even productive in some instances. Take walking from stand to stand for instance. Stealth during the first quarter to half mile of walking from a previous stand is probably academic. The coyotes in that area have heard the call and responded or they have already left. A slow crawl to maintain silence only wastes time that could be used to make additional stands and call more coyotes. Move quickly for the first part of your moves, slowing and becoming stealthier as you near your next stand. Don’t totally disregard noise. Avoid talking with your partner. If you can avoid crunchy snow or noisy gravel and maintain the pace, by all means be as quiet as possible. But there are times when silence isn’t totally necessary.

If ever there was a place to be purposeful in your coyote calling, it’s in the set-up. As I approach a stand, whether it is the first time I have called it or whether I have called it previously, I stop and check the wind and envision where the coyotes may come from and how that will play out on the stand this time. My mind’s eye rolls through the different possibilities like takes on a movie set quickly walking through the “What ifs” of this stand.

What if a coyote comes from over the ridge instead of out of the draw. Will we see it? Will it get our wind before we see it? If the time of day is such that thermals may change during the stand, how will that affect the set-up? Is the sun coming up over the ridge? If so, will it leave you exposed in the sun before finishing the stand? Will it blind you to the direction from which the coyotes are likely to come?

As to the wind, Titus’ Rule is “Make them show themselves if they want the downwind.” Can you see downwind? You don’t need to face downwind but be sure someone can monitor it. Bark incoming coyotes to a stop and shoot before they get into your scent cone. Setting one person downwind of the caller or placing your electronic call upwind of your location when calling solo is many times a good idea. The exception to this is when you are certain because of terrain, other features, or the fact that everything behind you has been called that nothing will come from that direction. In this case, set crosswind of the caller where you can still see the downwind. This will leave the area downwind from the sound free of scent so a coyote can come from directly downwind of the call without smelling you. This proved fatal for one co
We entered the area from the northwest with a slope on our right. The wind was out of the north. I placed the caller 35 yards east out onto the flat and crosswind of the slope. We moved upslope and further crosswind to set up. This resulted in a commanding view of the flat. Several minutes into the stand a smart old male was coming across the flat towards our location. As he neared the sound, he began to use the cover and a low fold in the ground to slip to the downwind side of the caller. He cautiously moved through the tall brush towards the sound without catching our scent though we were only 50 yards away. My client had positioned his rifle while the coyote was out of sight so he was ready when the coyote stopped to look for the source of the sound. It was a chip shot. Had we been setting with the caller or straight downwind of it, the coyote likely would have caught our scent before we were able to see him or get a shot.

I refer to leaving the downwind side of the caller open as “giving them the wind.” But, it works best when you are fairly certain of the direction from which the coyotes will be coming. If the coyotes may come from either side of your scent cone, a crosswind set-up may be less effective. This assumes the use of an electronic call or multiple hunters on stand, of course.

There are times after evaluating the stand that it becomes obvious you can’t make everything work. Use your best judgment based on your experience and go with it unless the likelihood of the coyotes coming from a poor direction is high. In that case, abandon the set-up and call it when conditions are more favorable. Normally we can play the wind regardless of its direction but we have some stands that we just won’t call at all if the wind direction is wrong.

Some stands are much better called in the early morning or in the evening on clear days. Good camo, antireflective finishes on your rifle and gear as well as face masks and gloves help when calling towards the sun, but you are still at a disadvantage. Move even slower and more deliberately than usual. Keeping the low sun behind you causes incoming coyotes to seemingly glow. It also makes it much more difficult for the animals to spot you, especially if you are set up in the shade.

Whether setting in the shade or in the sun, movement is even more important than camouflage. Predators key on quick movements. Hunting solo makes remaining motionless more difficult as the single hunter has more directions to watch. Contrary to much of what you read, just as silence when moving between stands isn’t necessary, neither is staying absolutely still. The key is how you move and when you move. Scanning from side to side in a very slow motion allows you to catch incoming predators earlier and get ready for the shot before they are close enough to “bust” you. But, unless a predator is looking straight into the sun or you feel he is about to bolt, don’t move while the coyote is stopped! Make your moves while the coyote is moving and even then, make them slow and deliberately. Did I mention that you need to move slowly?

The first nine shots from my “Perfect Coyote Rifle” resulted in nine dead coyotes. The shots were honestly not that difficult primarily because of the principles we are talking about. My eyes are not the best, my hearing is terrible and there are much better marksmen than I in the field but good set-ups and attention to detail set you up for success. It stacks the odds in your favor.

Before even leaving the vehicle, begin to become deliberate and purposeful about your actions. Think through each move you make and how they may affect your success. If you tend to be spontaneous try slowing down and analyzing more. If you’re already deliberate and analytical maybe even with a slight case of O-C, you may need to lighten up and just enjoy the experience more. Either way, analyze your coyote hunting looking at each thing you do individually and becoming deliberate in your actions. In short, start calling coyotes on purpose. Your odds of success will increase accordingly!


Tim Titus has been calling coyotes for 35 years. He lives in the coyote rich country of Southeast Oregon where he and his son spend their winters calling predators and their springs and early summers shooting varmints. Tim owns and operates No Off Season, an on-line predator and varmint hunting store and guiding business. You can check it out at No-Off-Season.com.
Reactions: WMDM