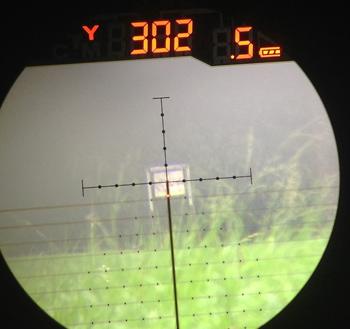 I have to admit I was very skeptical about how well the Burris Eliminator III scope would function. But my skepticism was quickly replaced by amazement. From 100 yards to 1166 yards, the scope, laser and trajectory of the bullet were mapped precisely, and in a fraction of the time it takes to range, dope and shoot my regular guns.

When the box arrived from Burris, I was not taken aback at all by the look of the Eliminator III scope. Its big knobs and long plastic shape made it look more like a toy than a high quality ranging rifle scope. But when I lifted it from the box, it felt solid, and the total weight of 26 ounces made me realized there was something to this scope. Little did I know then just how powerful this scope would be.

I decided to mount the Eliminator III on one of my SSG (Straight Shot Gunsmithing) rifles, chambered in 6x47 with some extra work on a better trigger and break, installed by DCG (Dan’s Custom Guns). I chose this rifle because of it speed, accuracy and low recoil. Instantly I had issues trying to mount the scope. Burris included three mounting shims labeled (A, B and C), but there were no instructions on their use, function, or size. Since there were no instructions for the use of the shims, I did not use any and mounted the scope on my full length 20 MOA rail. The gun would not zero, so with an email to Burris I was quickly sent the mounting instructions for the shims and the recommended shim for my rail, which was shim B for a 20 MOA rail. A is for a 10 and C is for a 30, or they can be used on different rails pending your bullets trajectory to maximize the range of your gun.

We now carry these in the LRH Store.

-Len Backus-​
With the new shim installed, I reprogrammed the scope to ensure all ballistics and inputs were correct, and off to the range we went again. The tracking of the turrets is exceptional. I had bore sighted the scope to the rifle and the first shot was 4.7” right and 3.4” low at exactly 100 yards. With 19 clicks left and 14 clicks up, I put three rounds on top of each other in the bull’s-eye. Being that I was not on my long distance range for sight in, the next distance I tried was 303 yards, and that was the max distance until I went down east the following day. Shooting at the 18”x16” steel plate with center aiming dot, I was able to range, acquire and shoot in seconds at 303 yards and had bullets stacked on each other. It was time to put this scope to the test.

The next day, I took my target stand, along with my bench, bi-pod and Leica 1600 range finder to a buddy’s farm called “The Big House”. The long fields and straight roads allow for shots out past a mile. I set up the same 18”x16” steel plate and drove away, stopping when I felt I was in the 500 plus yards range away and set up my bench. The Eliminator III stated the distance to be 570 yards on my first click, and my Leica 1600 confirmed the range, but on the fifth attempt. It was not able to acquire the refection easily at that range without a bi-pod. I set up on the bag, re-acquired the target through the Eliminator III, settled the dot on the plate and fired. With a cold bore, the gong rang and the shot was about ½” low and ¾” left. I shot twice more and these rounds found the mark, but one was 2” left and one 1 ¾” right. That is not a good group from this gun with my hand loads. I unloaded the gun and settled behind it again to check parallax, and realized there was a small cant in the reticle. I was spraying bullets because the Eliminator III does not have a level, and since it used the whole rail, a rail mounted bubble is not an option either. Luckily I had a small carpenter level in my truck, and checked the level of my gun to the top turret, and found that to be perfect, so by laying the level on the top turret, I could level the gun before each shot. I shot three more rounds from 570 yards and they were in a 1.72” group stacked on top of each other.

I loaded the bench and moved further away, not worrying about hitting any particular yardage, as the scope makes calculations for me. My next stop was 771 yards from the target. I sent three rounds down range and they were all right 1” but in a very nice group. The wind was light, and I had compensated for the wind, but I believe the right impact was from spin drift. With one click left, the next three were stacked in the black dot. I was very impressed. As I got ready to pack up and move, four deer came out down range, and fed on the path. Two were at 463 yards and 2 were at 592 yards. A light rain began to fall. As the rain intensified, I was not able to range the further deer with the Eliminator III or my Leica 1600. When it switched to an all out flood, neither rangefinder would acquire and range any of the deer.

I watched the deer and waited for the rain to stop, and again moved away from the steel target, stopping at 990 yards. The sun had come back out and a mist and mirage were very evident in the optics. My Leica 1600 would not range the target, but the Eliminator III did on its third attempt. Again, it was just simple after the range had been acquired. Adjust for wind, use the lighted point of aim, squeeze, and bong goes the gong. After sending down three rounds at 990 yards I moved back again, stopping at 1069 yards. Again it was the same procedure, and I actually had 2 of my 3 rounds touching at 1069 yards and the third was only 5” to the left but the proper elevation, well within the boiler room of any North American game animal.

The mist was now gone, but the mirage remained. Getting giddy now, I tried backing up another 100 yards, being that I saw I was near the end of possible drop compensation on the vertical axis of the scope. I moved further back and found the scope would range, but I was out of vertical compensation. I moved forward a few yards at a time, and found that my max range for my gun and load, with the scope mounted on a 20 MOA rail with 20 MOA shim, was 1166 yards. Any further away from the target, the scope could not show the proper aim point and would blink with 4 or 5 orange dots at the bottom of the scope on the vertical axis. Being realistic, who is going to honestly try to ethically kill an animal past 1166? If you feel you have the ability and the need, the scope would range out past 1600 yards on trees, so all you need is a faster, flatter shooting round than my 6x47 with a 105grain A max, and the scope can calculate the drop for you certainly out to 1400 yards. With that said, I did fire off three more rounds from 1166 yards, and all three found the plate.

Through the total range of my shooting, I did find that the further back I got, the more right of center my bullets impacted the target. Wind had some to do with this as it was light and variable our of the 9 o’clock position (but only for the last 400 yards of the range, as the rest of the range is protected by trees), but I also feel the spin drift of the bullet had some play in this. By the time I was at max range, I was doping the scope 1.25 MOA to the left to hold the rounds on the center of the plate. As I moved back in closer, I had to adjust back to the right to keep my rounds finding center mass. This is where knowing your gun and knowing your load is imperative to making a good, ethical and accurate shot. Without the left dope at 1166 yards, my bullet would not have impacted the plate, as it would have been almost 6 inches wide of the plate without it.
Next page: Burris Eliminator III Scope Review >