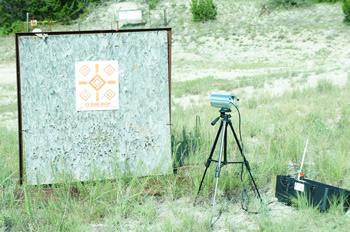 The Bullseye camera system allows you to view live video from a camera set up near your target from up to 1000 yards away on your own laptop computer screen. The whole setup includes a weatherproof camera, a tripod, a 5-hour rechargeable lithium battery, charger, antenna, router, software and a flash drive. It all fits into one nice compact case that looks like a tackle box. Laminated step-by-step instructions with problem solving tips are included. The Bullseye camera system software is currently compatible with Windows XP, Vista and Windows 7 or 8. Smartphone support (iOS and Android) is coming soon, and will be a free software update.

The Bullseye Camera System all set up for first test at 75 yards.


Setup of the Bullseye camera system only takes about five minutes. First, I stapled a sight-in target to my 75 yard target frame. Then, with the easy setup instructions in hand, I opened the Bullseye box and set up the tripod about 8 feet out and to the right from the target, at the approximate height of the target center. Attaching the Bullseye camera to the tripod was a breeze. The red laser was turned on, but I could not see the dot on the target due to the bright sun, so I sighted the camera in by eye. All the power cords were color coded and easily attached to the battery.

Back at the shop, I set up the Bullseye software on an HP mini laptop with a 10 inch screen running Windows 7. This small size PC worked perfectly. On my bench I set up the rifle in the rest and replaced my spotting scope with the laptop. This placement of the laptop allowed me to only have to lift my head up slightly from the scope to see the computer screen. This was far better than pulling off the rifle and moving to where I could use the spotting scope.

What the shooter sees on the laptop screen


The shots started to hit closer and closer to the center, so I moved the Bullseye camera system out to my 100 yard target. At that location I was able to see the laser dot when I was setting up. I had a big grin on my face after shooting a few shots at 100 because the rifle was hitting where I wanted and in a tight group. Next would be testing at a longer distance.

This is how you would set up the camera. Note slight angle to the right and about level with the target


I called Hal Harton, a neighbor (In Texas anyone within ten miles you can call a neighbor). Hal had a setup that would allow us to shoot up to 500 yards from inside his air conditioned shop. If we wanted to shoot 1000 yards, we would have to go to another part of his ranch and shoot outside. But Texas is hot in August and that day was no different, so we decided to stick to 500 yards.

Hal Harton shooting at 500 yards on his home range. Note how he shoots through a barrel attached to the window. This barrel has insulation inside and acts as a sort of silencer since his shooting room is so close to his house.


We set up the Bullseye camera to view a new target at 500 yards. At the shop Hal had a .243 that had a fast twist so he could shoot heavier bullets with better BC at long distance. Hal set up to shoot through a window that had a plastic barrel attached with holes at both ends to shoot through. The rest of the barrel had insulation on the sides. This setup cut down on the report of the rifle. Unfortunately, this did not leave much room on the shooting bench to allow the computer to have a direct line of sight to the router antenna by the camera. Since the computer was not in line of sight of the Bullseye camera, there was a slight effect on the system. But we could see Hal’s shots and he was able to work his last two shots in less than one half MOA. On a different morning back at my place, I took the Bullseye camera system out to 450 yards and it worked perfectly.

About five years ago I was looking for a wired camera setup for my home range. At the time it was rare to find a wireless camera that could transmit one hundred yards, so I set up a wired system to send the image to my television. The problem with this system arose that when the sun was bright I could not get a picture, and since I shoot to the west I nearly always had sun. That old wired camera has since been placed in the box of rarely used things in the shop.

Hal’s sighting-in target at 500 yards. The last two shots were those closest to center.


In the last year quite a few wireless cameras similar to the Bullseye have come on the market, but they are less affordable and can’t do all that the Bullseye camera system can do for the shooter. Personally, I feel the Bullseye camera system is a real bargain at $449 for the 500 yard model and $549 for the 1000 yard model. There is also a 1000 yard Long Range Elite Version that includes its own laptop PC, all for $949. Go to Bullseye Camera at the LRH Store
for a complete review and videos.

Pro’s: The Bullseye camera system is being sold at a reasonable price ($449-$549), and the system is compact and lightweight. The step by step instructions are easy to follow, and the Bullseye camera can be set up at the target in about 5 minutes. This system can be also be used by handgun shooters, for patterning a shotgun or even by archery shooters. The Bullseye will also work on steel targets. All software updates, including the upcoming smartphone version, will be free.

Cons: The laser does not show up really well in very bright sunlight. At times the dots displayed on the screen by the software covered up small groups. The shooter’s laptop computer must be in line of sight of the router antenna set up near the camera.

Future Updates: All future software updates will be provided to owners for free. Bullseye also plans on replacing the red laser with a brighter green laser that will be easier to see in bright sunlight. New software additions will allow the user to adjust the size of the dots that show up on your target. Bullseye is also working on a free software update that will be compatible with iPhone and Android smartphones. Long range public and private ranges have already shown an interest in installing permanently mounted Bullseye camera units for use by clients.