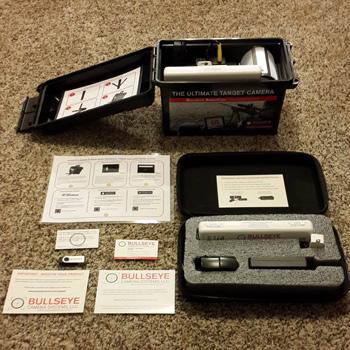 In the shooting world, the idea of staging some sort of camera at a target’s location and then being able to view an image of the target from the shooter’s position is not a new one. A handful of companies market target cameras to this end, some that are even capable of transmitting over extreme distances. It’s easy for many of these setups to become cumbersome when dealing with all the wiring, cameras, batteries, stands, screens, transmitters and receivers.

Bullseye Camera Systems takes a leap forward with the AmmoCam Long Range Edition by providing a target camera system that is very compact and easy to use yet still able to transmit up to a mile. Furthermore, Bullseye offers the AmmoCam in a package that is priced to beat similar offerings by the competition.

Hardware
The AmmoCam derives its name from the packaging containing the camera and transmitter. The AmmoCam is encased in an MTM Case-Gard ammo box. The target camera is mounted inside the box with the lens protruding slightly through the side. The box also neatly houses the battery pack, charger, collapsible stand and transmitter unit. A custom cut foam block holds all of the contents securely inside the ammo box and provides easy access to switches and plugs. The AmmoCam’s ammo box and its contents weigh in at just over 5 pounds.


The base station receiver unit comes in a separate zippered semi-hard case and weighs a mere 2 pounds. Again, a custom cut piece of foam holds the base station’s receiver, battery and charger securely in place. Battery life is advertised as 5-6 hours of run time in between charges. I probably only ever tried pushing the 4 hour mark, but never had a problem with power or charging. The whole package even comes pre-charged and ready for action!
Bullseye also includes laminated cards that clearly lay out step by step instructions on how to get started. Even the technology-impaired can manage without too much difficulty.

Software
Getting started is easy. Bullseye’s free Target Manager app and software can be found on the Google Play App Store for Android devices, on the Apple App Store for iPhones and iPads, and on Bullseye’s website for Windows-based PC’s. I have an Android phone, an iPad and a Windows PC, so I decided to try all three downloads. Ten minutes later I had downloaded all three and had installed them on their respective devices.